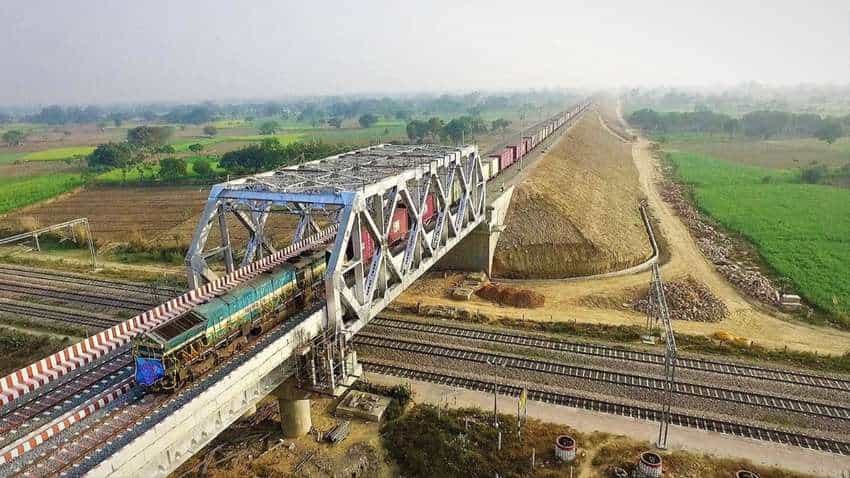 Budget 2019: Via PMGSY, government has given massive push to all forms of physical connectivity, says FM Nirmala Sitharaman

Dedicated freight corridor, a project which is is part of the Golden Quadrilateral connecting New Delhi, Mumbai, Chennai and Kolkata, is expected to bring down the freight charges by 50 per cent when it will become operational in 2021, a top DFCCIL official has said as per a report in PTI. The haulage charges on Dedicated Freight Corridor Corporation of India Ltd network will be 50 per cent lower compared to the freight tariff in the Indian Railways (IRs), DFCCIL MD Anurag Sachan told media during a two-day construction site visit of Eastern Dedicated Freight Corridor (EDFC).

"We will be running all the trains at 100 kilometres per hour (kmph) on a fully automated signal system, so the haulage charges compared to the IRs will be very less. It will be 50 per cent. We will be running 120 trains each way a day with total carrying capacity of 13,000 tonne. So, we will not let this capacity to be under utilised," Sachan said.

The corporation is in talks with the Ministry of Railways that some part of lower freight charges should be passed on to the customers, he said.

However, he clarified that it will be on the regulatory body for the sector to fix the charges.

"They will be at par. So, I am sure that with these kind of transparency, the freight charges will come down," Sachan said.

Notably, the bulk of goods is being carried via roads in India as it is faster as well as cheaper than the railways. Over the past many decades since 1950s, the Indian Railways has been losing market share to road transport because of inadequate infrastructure and poor services. As on date, 90 per cent of India's passenger traffic and 65 per cent of its freight use road transport and these shares are growing, as per DFCCIL.

The corporation, a public sector undertaking under the Ministry of Railways, is currently engaged in constructing the EDFC and the Western Dedicated Freight Corridor ((WDFC).

EDFC will cover a length of over 1,800 kilometre between Ludhiana to Kolkata, while WDFC will ply between Dadri and JNPT port in Mumbai (1500 km).

The two corridors are expected to be completed by December 2021 and once fully operational they are expected to take over a bulk of freight traffic from the Indian Railways and thus help in making the passenger traffic more efficient and smooth.

The two corridors with an expected cost of Rs 81,000 crore (USD 12 billion) are being partly funded by the World Bank (eastern lane) and Japanese government's investment arm JICA (western lane).
Sachan said DFCCIL has spent around Rs 34,000 crore on this project in the last six years.

The portions which have been completed along these corridors are already being operationalised for the automated running system.

The operation control center (OCC) at Prayagraj in Uttar Pradesh will be the command centre for the entire route of EDFC.

Equipped with first of its kind Integrated Train Management System (TMS) and Supervisory, Control and Data Acquisition (SCADA) System in India, it is built on ICONIS (Integrated Control and Information System) platform.

Sachan said the corporation has written to the PMO to invite Prime Minister Narendra Modi to inaugurate this control centre when he visits Prayagraj later this month.

This centre hosts a 90 metre long digital wall with officials monitoring it on a 24x7 basis to manage the automated goods trains running system.

Sachan also said that DFCCIL will start survey of the remaining corridors of the Golden Quadrilateral, and begin work by the time the western and eastern corridors are completed by December 2021. "The government, after seeing the progress on these two corridors, have decided that it is the right time that we should plan to take up the future corridors so that by the time we finish these in two years, these corridors are also planned for execution," he said.

The total length of these three corridors is about 4,000 kilometres.

Budget 2019: Via PMGSY, government has given massive push to all forms of physical connectivity, says FM Nirmala Sitharaman