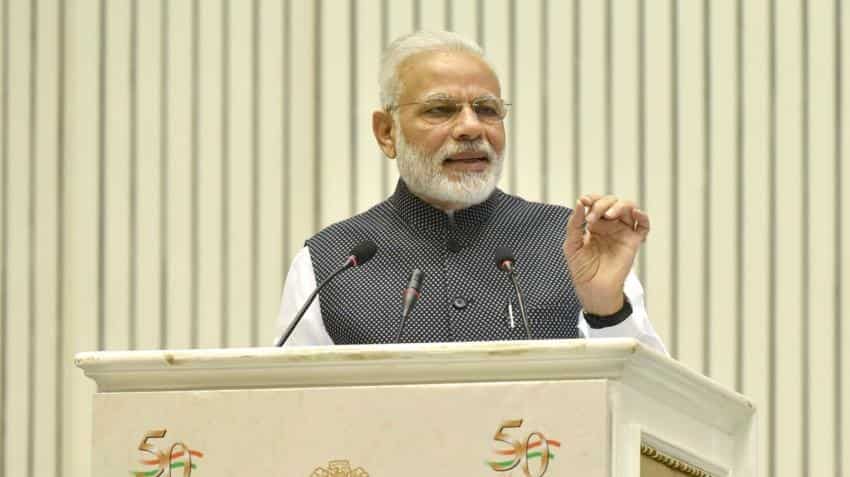 Prime Minister Narendra Modi said there will be one big draw every week with winning price in lakhs. Image Source: IANS/PIB

In his monthly radio address to the nation `Mann Ki Baat`, Modi on the occasion of Christmas said 15,000 people who use digital payment modes will be given a reward of Rs 1,000 each by a lucky draw under `Lucky Grahak Yojana`. This amount will be transferred to their accounts.

"This scheme will last for 100 days (from Sunday). As such lakhs of people will get crores of rupees," Modi said.

The Prime Minister said there will be one big draw every week with winning price in lakhs.

"On the occasion of Ambedkar Jayanti -- April 14, 2017 -- we will be conducting a bumper draw in which the winning price will be in crores."

To promote cashless business among the traders across the country, Modi also announced `Digi Dhan Vyapar Yojana` which will only be for traders.

"To encourage cashless business in the country, the government has taken a major decision. All businessmen adopting digital transactions will get rebate in income tax," Modi announced in the 27th edition of `Mann Ki Baat`.

The Prime Minister appealed the traders to join the schemes and also encourage people to adopt cashless transactions.

"This scheme is to benefit all sections especially poor and lower middle income groups. Hence, only transactions between Rs 50 and Rs 3,000 will be rewarded," Modi said.

Modi said that even poorest of the poor through unstructured supplementary service data (USSD ) can use ordinary feature phone for digital transactions and become eligible for reward scheme. In rural areas people can use Aadhaar Enabled Payment System (AEPS) for digital payments.

Modi added that people would be able to take benefit of these schemes only if they use mobile banking, e-banking, RuPay cards, USSD, Unified Payment Interface (UPI) or other digital payment modes.

He said that there has been tremendous increase in awareness about digital transactions, cashless business.

"In the last few days, cashless business has seen 200 to 300% rise. I am sure people will enthusiastically participate in these schemes," Modi said.

Modi also lauded the efforts of all the states and Union Territories for promoting the campaign of cashless trading and digital transactions.

"I was told that Assam government has decided to give 10% rebate on property tax and `vyapar lisence fee` if paid through digital transactions. I congratulate Assam government for such initiatives," PM said.

"These 30 crore people can join this reward scheme right away. We should be at the forefront of using digital means to make payments and transactions," he added.

ALSO READ: Know everything about how to use Aadhar app to make payments