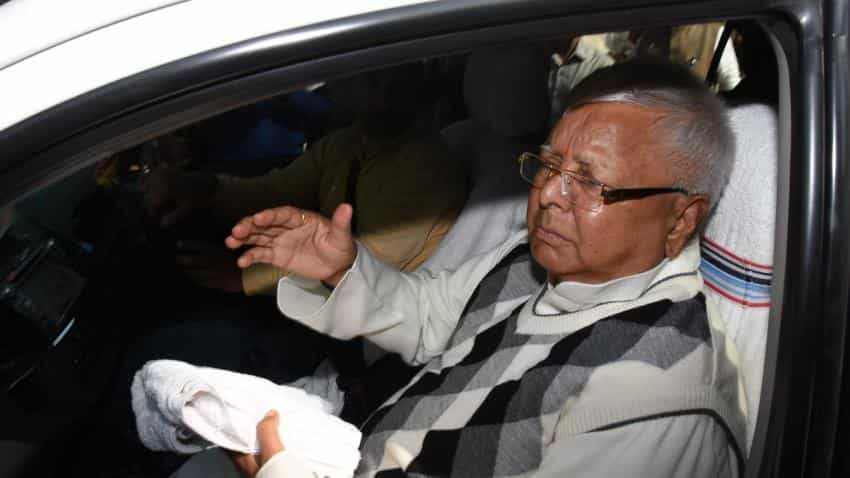 Lalu Yadav wishes Tejashwi on birthday; says Bihar will give him gift on counting day

A special CBI court on Saturday convicted RJD chief and former Bihar Chief Minister Lalu Prasad and 15 others in a case relating to the multi-million rupee fodder scam.

The court acquitted another former Bihar Chief Minister Jagannath Mishra and five others in the case, related to fraudulent withdrawal of Rs 84.5 lakh from the Deoghar district treasury.

The CBI court will pronounce the quantum of sentence on January 3.

Lalu Prasad has been sent to jail. Angry RJD workers tried to stop the police vehicle when Lalu Prasad was being taken to jail.

The accused persons appeared at the CBI court at 11 a.m. and judgment was deferred till 3 p.m.

According to a lawyer, the trial in the case was completed on December 13 in a special CBI court of Ranchi.

There were 34 accused in the case and 11 died during trial, while one turned CBI approver and admitted the crime.

Speaking to reporters on the judgment, senior RJD leader Raghuvansh Prasad Singh said "We are disappointed with the judgment. In the same case Jagannath Mishra has been acquitted. Lalu had got jail, while Mishra has got bail. This is the game of Narendra Modi."

Lalu Prasad and Mishra are already convicted in a fodder scam case in 2013 and are out on bail.

Both are accused in four fodder scam cases. The trial in two other cases is going on in special CBI courts of Ranchi.

The trial in three cases gained momentum in May this year after the Supreme Court directed that the trial be completed in nine months.

In Patna, the Rashtriya Janata Dal said it will challenge the verdict in the High Court.

In New Delhi, RJD leader Manoj Jha said that the "caged parrot" (referring to the CBI) has been "unleashed on political rivals" who do not bow before the BJP.

He said the decision would not weaken the RJD workers` resolve to fight back its rivals politically.

Targeting the BJP, Jha said that 11, Ashok Road (BJP headquarter in Delhi) was a "washing machine" that washes away all the taints of any person who bows before the party.

Lalu Yadav wishes Tejashwi on birthday; says Bihar will give him gift on counting day