Labour Ministry wants to retain 8.8% interest on EPF for FY17 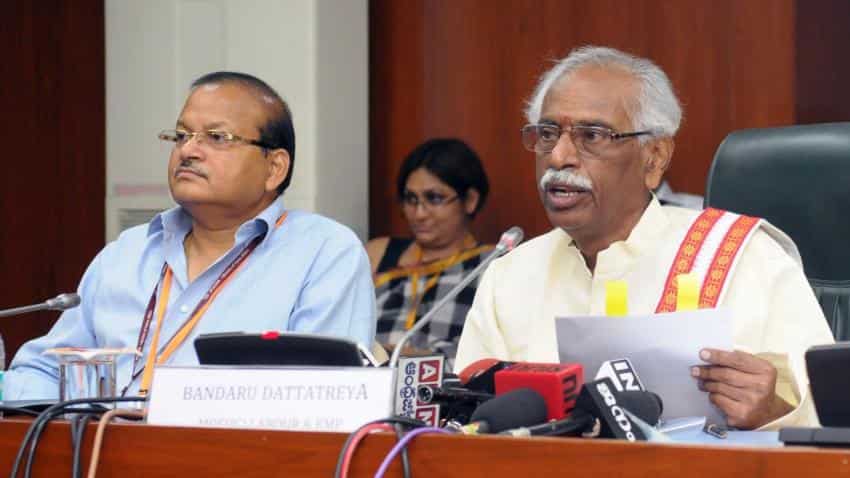 The Finance Ministry had earlier this year decided to lower interest on EFF for 2015-16 to 8.7 % from the 8.8 %. Photo of Labour Minister Bandaru Dattatreya. Image Source: IANS

The Labour Ministry is pitching for retaining 8.8 % interest rate on EPF deposits of over 4 crore subscribers of the retirement fund body EPFO for 2016-17 and trying to bring the Finance Ministry on board.

The Finance Ministry had earlier this year decided to lower interest on EFF for 2015-16 to 8.7 % from the 8.8 % approved by the Employees' Provident Fund Organisation's apex decision making body, the Central Board of Trustees (CBT), which is headed by the Labour Minister.

The government had to roll back the decision and provided 8.8 % rate of interest on EPF deposit for last fiscal following protests by trade unions.

This time, according to sources, the Labour Ministry wants to avoid such a situation and is seeking the Finance Ministry's informal approval over the issue in advance. The CBT is scheduled to meet on Monday where the issue of interest rate is listed on the agenda.

As per the practice, CBT decides interest rate, which is later notified by the Finance Ministry after its concurrence. This is necessary to give tax exemption on EPF deposits, accrual of interest and withdrawals.

"In order to avoid any uproar on interest of EPF, Labour Minister Bandaru Dattatreya has recently met Finance Minister Arun Jaitley and Minister of State for Finance Arjun Ram Meghwal to convince the ministry for retaining 8.8 % rate of interest for the current fiscal as well," said a source.

As per the EPFO income projections of Rs 39,084 crore for the current fiscal, providing 8.8 % rate of interest on EPF deposits will leave a deficit of Rs 383 crore. There would be a surplus of about Rs 69.34 crore if interest rate is lowered to 8.7 %.

However, the source said: "Labour Ministry wants to utilise about Rs 409 crore surplus with the EPFO which accrued after providing 8.8 % rate of interest for the last fiscal."

There were speculations that Labour Ministry may align the EPF interest rate for the current fiscal with other small saving schemes of the government like Public Provident Fund after nudging by the Finance Ministry.

In September, the government had decided to reduce the interest rates on small savings schemes marginally by 0.1 % for the October-December quarter of 2016-17, which resulted in lower returns on PPF, Kisan Vikas Patra, Sukanya Samriddhi Account, among others.

The rate of interest on popular PPF was reduced to 8 % in the third quarter of the current fiscal as against 8.1 % in the previous three-months period.

Similarly interest rate on Kisan Vikas Patra has been brought down to 7.7 % from 7.8 %. As a result the KVP will now mature in 112 months instead of 110 months.

The source said the Labour Ministry has also pointed out in its discussions with the Finance Ministry that the income projections for the current fiscal did not factor in the returns on its investments of around Rs 10,000 crore so far in Exchange Trade Funds as there is no mechanism to do that.

The source further said that unless EPFO liquidates the ETF investments, there could not be any income from it especially in a scenario where EPFO has no exit (sale) policy for these.

Neither scientific nor under global norms: Govt rebuts survey-based news on high unemployment

Moonlighting: 'Worker shall not take...' - What Government said in Parliament

Labour Code update: Draft rules ready with states; What will change after rollout?