Left with no cash to continue flying, the once-mighty Jet Airways on Wednesday suspended operations temporarily. 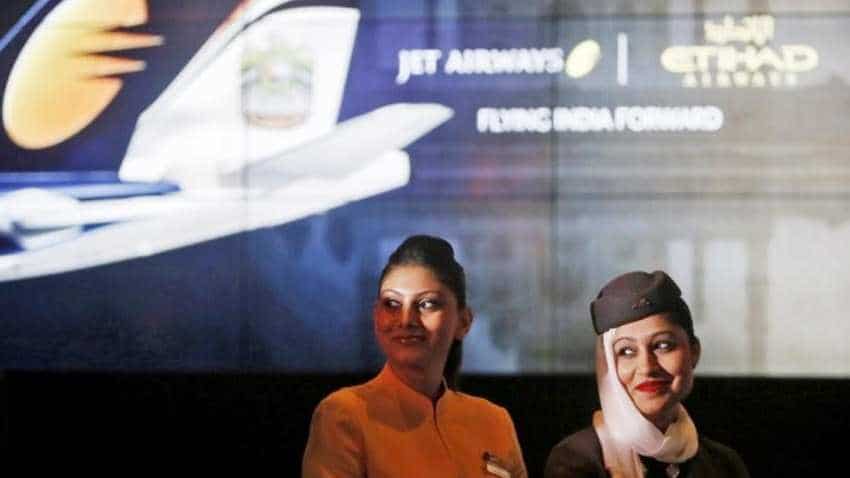 Lenders are exploring ways to utilise about 15 planes owned by Jet Airways and also discussing with authorities on protecting the valuable assets, including airport slots, of the now-shuttered airline, banking sources said. As they wait for completion of the bidding process for stake sale, the domestic lenders, led by SBI, are looking at options to raise funds from available assets of the carrier, which has served the Indian skies for nearly 26 years.

Left with no cash to continue flying, the once-mighty Jet Airways on Wednesday suspended operations temporarily -- a decision that has also left more than 20,000 employees as well as various other stakeholders in the lurch.

The sources said the lenders are actively considering proposals, including from Air India, for utilising the planes owned by Jet Airways. The use of these idle planes would ensure that they remain in good condition as well as earn revenues, they added.

Jet Airways owns 16 aircraft, including 10 wide-body Boeing 777-300 ERs, rest of the planes were on lease. The full-service carrier had more than 120 planes in its fleet last year.

Earlier this week, Air India Chairman and Managing Director Ashwani Lohani wrote to SBI Chairman Rajnish Kumar saying that the airline is looking at leasing five of Jet Airways' Boeing 777s and operate them on London, Dubai and Singapore routes.

As concerns mount over the future course of Jet Airways, the sources said lenders have been proactive and cannot be blamed for the current situation at the airlines.

"They (lenders) have been actively engaging with the company for almost nine months ever since the airlines started incurring cash losses and have been urging the management to come forward with a definite plan for resolution.

"Unfortunately, the management and the promoter delayed in taking a decision leading to the present situation. The lenders continued to support the airline during this period," one of the sources said.

The decision of founder-promoter Naresh Goyal to step down came as late as March 25 and he signed a binding agreement to facilitate stake sale only in the second week of April. By then, the airline's operations had been severely affected, the source added.

The source also said that banks have now put in place a transparent bidding process for a new investor to take over the airline and the outcome would be known by May 10.

According to the sources, lenders have also reached out to relevant authorities to protect valuable assets for the airline, such as airport slots, as it would improve the chances of a better revival. The best revival prospect would be to have a new investor who brings in sufficient cash and also has a definite plan going forward, they added.

It is also learnt that while the promoter has stepped down and entered into a binding agreement, there has been no change in complexion of the board of the airline due to technical reasons.

"The conversion of debt into equity was conceived as a way to allow a new investor to come in. Also, while the lenders have nominated A K Purwar and Kapil Kaul to the board of Jet Airways consequent upon stepping down of the promoters, this is yet to take effect on account of some technical reasons," another source said.

The banks have been working with the same executive management team who have been in charge of running the company even after stepping down of the promoter, the source added.

On Thursday, lenders said they were "reasonably hopeful" that the bidding process for the airline will end successfully.

"The lenders after due deliberations decided that the best way forward for the survival of Jet Airways is to get the binding bids from potential investors who have expressed EOI (Expression of Interest) and have been issued bid documents on April 16," they had said in a statement.

A consortium of seven domestic lenders led by State Bank of India (SBI), has invited bids from potential suitors. Their debt exposure to the airline is more than Rs 8,500 crore.

"Lenders are reasonably hopeful that the bid process is likely to be successful in determining the fair value of the enterprise in a transparent manner," it said.

Banks had rejected emergency funding request of Jet Airways that forced it to ground operations.