While, five out of nine macro indicators lost pace in Q2FY17. 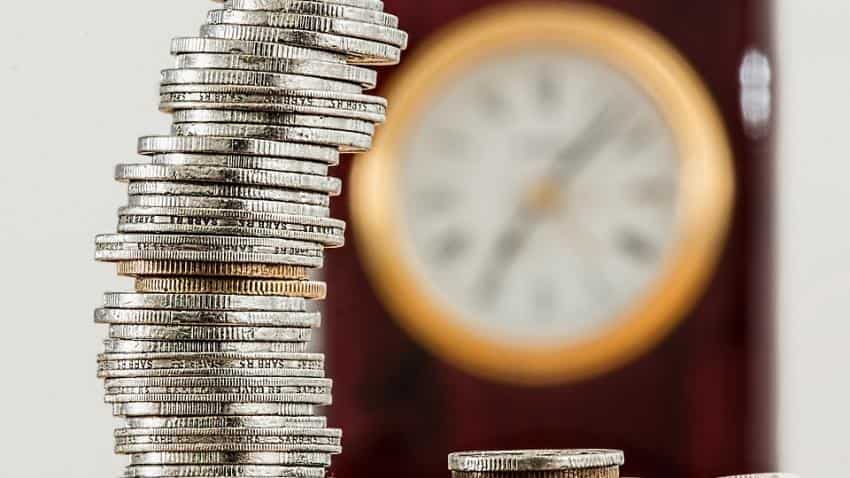 The economic momentum in India decelerated further in the second quarter of the current fiscal which ended on 30 September, marking an 11- quarter low on India's Keqiang Index (IKI) front, said an Ambit Capital report. 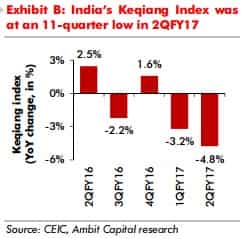 According to Ambit Capital's recent report, analysis of 17 high frequency indicators (HFIs) suggested that 11 out of 17 indicators decelerated in Q2FY17 as compared to eight indicators declined in Q1FY17.

The HFIs further suggested that though the 'consumption' will continue to do well whilst 'investment' will remain under pressure in the second quarter of this fiscal, said the report.

Mukherjee, in the report title, 'After a weak 2QFY17, expect a mild pick-up in GDP growth', said, "In the short term, we expect higher agricultural sector growth in 2HFY17 and the award of the 7th Pay Commission to propel a mild U-shaped consumption-driven pick-up in GDP growth in 2HFY17. From a medium-term perspective, for FY18, we expect GDP growth to be recorded at 7.3% YoY (v/s 6.8% in FY17) as the “M+R+T resets” (Modi+Rajan+advent of Technology) lend support to consumption growth".

As per the report, most notably, growth in growth in the commercial vehicles sales component contracted by 6% YoY in Q2FY17 as compared to the growth of 15% YoY recorded in Q1FY17.

Is 'consumption' holding up 'Investment'?

As per the data available to research agency, suggested that guages related to consumption (such as two wheeler sales and passenger vehicle sales) continued to uptick in Q2FY17. While, investment remained under pressure as evinced by the persistent weakness in gauges like commercial vehicles sales, cement and coal production. 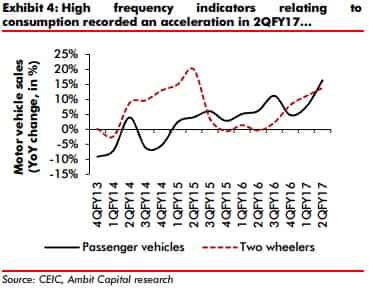 "Within consumption, early signs of rural consumption stabilizing are evident from the fact that rural wages are bottoming out and rose by 10bps whilst two-wheeler sales rose by 300bps in 2QFY17. Furthermore, WPI core inflation was recorded at an 8-quarter high while CPI core inflation also inched up, pointing to early signs of the return of pricing power", Mukherjee said. 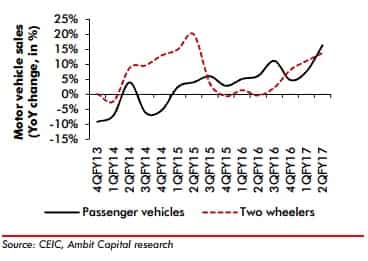 According to Mukherjee, it is critical to note that 'investment growth' will remain weak because: 1. the government has budgeted extremely low capex growth for FY17 (4% vs 21% in FY16); and 2. there are no signs of a private sector capex revival. 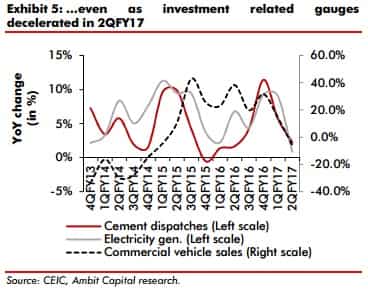 With the support from the both short-term and long-term for the consumption growth in India,  as access to end-consumers improves for manufacturers, improved selling reach will also enhance consumption, the report added.