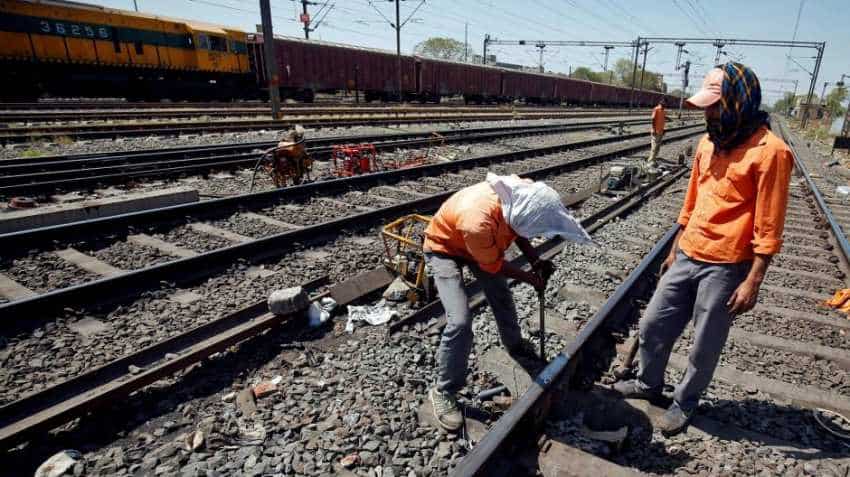 Composite sleepers were first used by the Railways in the Muradabad division in 2003. Image courtesy: Reuters
Written By: IANS
RELATED NEWS

Ministry official told IANS, Composite sleepers were first used by the Railways in the Muradabad division in 2003. They have an edge compared with the strength of wooden and channel sleepers. The official said that no complaint has been received till date about the use of these sleepers, which were

deployed on a bigger scale from 2016 in over 10 zones. The official also pointed out that composite sleepers, comprising a mixture of steel and fibre plastic, costs more as compared to the other sleepers. "The cost of a composite sleeper is about Rs 25,000, whereas a channel sleeper costs about Rs

7,000," he said, adding that cost is the big factor. He said the Railways preferred them over wooden sleepers because of environmental issues that cropped up over the cutting of trees.

"This decision has been taken in the wake of a Supreme Court order imposing restrictions on cutting trees. If successful, all wooden sleepers will be replaced with composite sleepers."

In June 2016, the Railway Board Executive Director (Track), in a letter to all the zonal offices, said that the Research, Designs and Standards Organisation (RDSO) was planning to replace wooden sleepers with those made of composite material. It would initially be tried on bridges.

The primary function of a sleeper is to grip the rail to the gauge and to distribute the rail load to ballast with acceptable induced pressure. Pavwan Droliaa, Managing Director of Asterix Reinforced Limited, which deals in manufacturing of composite materials, said that fibre-reinforced foamed urethane (FFU)

composite sleepers are made of rigid polyurethane reinforced with glass fibre. "As a lightweight, high-strength, environment-friendly product, FFU composite is a cost-effective alternative to timber or concrete," he said.

Droliaa said that synthetic sleepers are currently widely used on different types of rail transport systems, particularly on switches, turnouts, bridges or viaduct and other projects in high-speed railway and metro railway construction across the globe.

"I think, initially, the green and sustainable element is what attracts people, but people now realise its durability is beneficial because there`s no maintenance with this product once it`s installed," he said.

"It doesn`t have to be repainted, re-oiled, re-sanded... and it will last between two and three times longer than timber.

"Generally it is a much lower cost over that period of time; that is what appeals to councils and park authorities."