The entire 26.7-km Nerul-Belapur-Seawoods-Uran suburban line, once completed, will benefit the people of Navi Mumbai by providing direct access between Uran town, Jawaharlal Nehru Port and the newly-developed area of Mumbai Metropolitan region as well as Greater Mumbai. 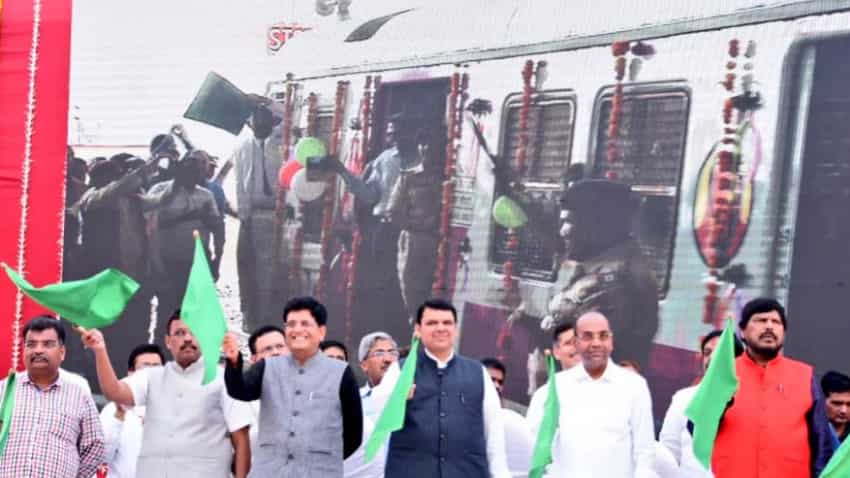 The new line between Nerul-Belapur-Kharkopar will augment the Harbour rail network that will allow expansion of suburban local trains till Raigad district.

The entire 26.7-km Nerul-Belapur-Seawoods-Uran suburban line, once completed, will benefit the people of Navi Mumbai by providing direct access between Uran town, Jawaharlal Nehru Port and the newly-developed area of Mumbai Metropolitan region as well as Greater Mumbai.

The new line will allow commuters coming from both Chhatrapati Shivaji Maharaj Terminus and Panvel to go up to Kharkopar.

Speaking on the occasion, Piyush Goyal pointed out that the Pen-Panvel electrification work had been completed nine months before the schedule of July 2019.

He congratulated the Central Railway and CIDCO (City and Industrial Development Corporation of Maharashtra) officials for working in tandem to complete the Nerul/Belapur-Kharkopar (Phase 1) of Nerul/Belapur-Uran line, thereby connecting the Kharkopar area to Mumbai city.

He also said that it is expected to completely electrify the remaining section of Central Railway in a year`s time.

Chief Minister Devendra Fadnavis thanked the Railways Minister for allotting funds in the budget for Maharashtra more than double in comparison to previous years.

The work on the remaining 14.3-km stretch from Kharkopar to Uran is under progress and is likely to be completed by 2020, an official said.

"This will connect newly rising suburbs of Ulwe, near which the Navi Mumbai airport is under construction," the official said.

A total of four bridges, five road overbridges, 15 road underbridges and one track underbridge will be developed between the Nerul-Kharkopar section.

The official said a total of 40 train services (20 Up and 20 Down) are planned to run on the Nerul-Belapur-Seawoods-Kharkopar section. There are six stations on the new section -- Nerul, Seawoods Darave, Belapur, Targhar, Bamandongri and Kharkopar.

On the Nerul-Uran stretch, there is a small branch line from Targhar to Belapur.

The official said the Indian Railways and the CIDCO will share the cost of the project in the ratio of 33:67.

The complete 26.7-km project, which was planned in 1997, is estimated to cost around Rs 1,782 crore. It gained momentum after Prime Minister Narendra Modi started reviewing it under the Pragati project.