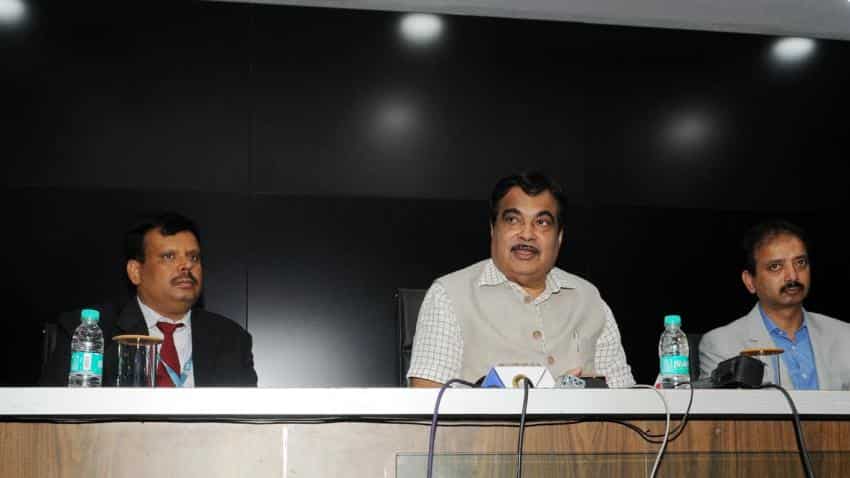 Union Minister for Road Transport and Highways and Shipping Nitin Gadkari addresses at the signing ceremony of the agreement with the Bankers for External Commercial Borrowing for JNPT in New Delhi on August 23, 2016. Image Source: IANS/PIB

"We are going to develop this country where our import of petroleum will be zero. We are promoting alternative fuel like ethanol, methanol, bio-CNG...This will boost the rural and agriculture centre and create huge employment," Road Transport and Highways Minister said.

India is one of the fastest growing economy in the world. At present, it is "golden opportunity" to cash on its agriculture, bamboo, surplus coal and power.

"The time has come to diversify agriculture," the minister asserted stating that it has the potential to change the entire rural economy at a time when more than 10,000 farmers in Vidarbha region had committed suicide.

"The socio-economic situation is not good, agriculture is facing acute problems. This alternative fuel economy is going to change socio-economic picture of agriculture and rural economy. This is time for the country to plan the way by which we can save the life of people in rural and agriculture sectors.. We can make ethanol from biomass that is cotton straw, wheat straw, rice straw and bagasse. Even from municipal waste we can make ethanol," the minister said.

Stressing on "waste to wealth", he said manufacturing ethanol and biogas from waste could result in savings to the tune of Rs 5 lakh crore annually.

The minister said ethanol is generated from biomass in Europe. One tonne of rice straw can get 400 litres of ethanol. In North East, bamboo could be used for making ethanol, he said.

He added it will eliminate pollution too as farmers in states like Haryana burnt wheat straw which caused pollution. Besides municipal waste and waste of vegetables and fruits could be used in manufacturing bio-fuel.

He stressed the need for use of science, technology, entrepreneurship and research and also said Niti Aayog is taking initiatives in this regard.

"We have finalised standard norms for bio-diesel, bio-CNG and ethanol and electricity," Gadkari said adding the bureaucracy also needed to fast track decisions.

Taking a jibe at bureaucracy, the minister said somewhere there is a need to expedite the entire decision-making process. "If there is a will, there is a way if there is no will there is no way. There will only be committees, discussions and research groups," Gadkari added.

The minister also stressed on the need to generate methane from coalblocks and said some of the companies who were alloted the blocks were not doing anything which is not fair.

Also, he said that surplus coal from Coal India could be utilised in making gas, etc., which in turn can result in gas-based urea production.

"We are giving subsidy of Rs 45,000 crore for urea. We are importing urea...We need a research institute and transparent policy. This is the future. It is import substitute, cost effective," the Minister said.

He also stressed the need for flex fuel cars on the pattern of Brazil and the US.