Prime Minister Narendra Modi and Uzbekistan President Shavkat Mirziyoyev held comprehensive talks Monday to broaden the scope of bilateral partnership and step up cooperation in key areas such as defence and counter-terrorism. 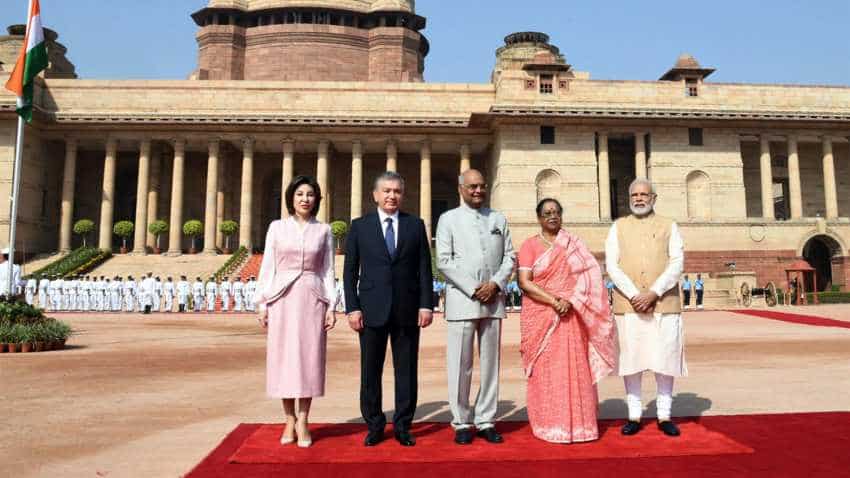 The President, Ram Nath Kovind and the Prime Minister, Narendra Modi with the President of the Republic of Uzbekistan, Mr. Shavkat Mirziyoyev.
Written By: PTI
RELATED NEWS

Prime Minister Narendra Modi and Uzbekistan President Shavkat Mirziyoyev held comprehensive talks Monday to broaden the scope of bilateral partnership and step up cooperation in key areas such as defence and counter-terrorism. The two sides signed 17 pacts in the sectors of defence, agriculture, science and technology and space, among others, which was termed "historic" by the Uzbek president.

The two leaders also discussed regional security, including the situation in Afghanistan, and asserted that dialogue was the only way to bring peace in the war-torn country. "We have had very comprehensive discussions. We have taken a long-term view to deepen the strategic partnership between the two countries," a statement quoted Modi as saying.

On his part, Mirziyoyev said the strategic partnership with India is "one of the most important priorities" of Uzbekistan. Defence has been an important aspect in the India-Uzbekistan ties. In this regard, the two sides agreed to work closely to expand and strengthen defence ties as well as defence industry cooperation, the joint statement said.

Both sides have agreed to hold joint military training exercises in counter-terrorism and cooperate in the field of military education and medicine, it said. They agreed to strengthen cooperation between the law enforcement agencies and special services of the two countries, including under the framework of the Uzbekistan-India Joint Working Group on Counter-Terrorism.

Both sides have also called for early finalisation of the Comprehensive Convention on International Terrorism. Uzbekistan will also set up a defence wing at its embassy here, the statement said. Noting the importance of a safe and secure regional environment for development and prosperity, the two sides agreed to work closely in addressing threats and challenges to national as well as regional security.

Modi said a stable, democratic, inclusive and prosperous Afghanistan was beneficial for everyone. "The two countries have decided to have regular contact in this regard," he said. Mirziyoyev said the "common opinion" of the two countries was that "there is no military solution to this problem. The only way to peace is a political dialogue between the government of Afghanistan and the opposition." Uzbekistan shares a border with Afghanistan.

"They reiterated support for efforts of the government and the people for a genuine Afghan-owned, Afghan-led and Afghan-controlled peace and reconciliation process that would allow for a peaceful, secure, united, inclusive and prosperous nation. "The sides shared the view that countering terrorism in all its forms and manifestations without distinction is important for sustainable peace and security in Afghanistan.

They expressed continued support for reconstruction and revival of the country. The sides agreed to have regular dialogue," the joint statement said. The two leaders also discussed connectivity in the region and agreed to explore various options to enhance surface connectivity between them. Modi thanked the Uzbek side for their support to India's membership to the Ashgabat Agreement, and expressed hopes that Uzbekistan would also join the International North South Transport Corridor.

"We have agreed to closely cooperate in the sphere of developing new transport connectivity corridor," Mirziyoyev said. He added that his country supported India's entry in the United Nations Security Council. The two leaders resolved to enhance cooperation at the Shanghai Cooperation Agreement and other international fora.

Mirziyoyev observed that despite the robust ties between the two sides, bilateral trade remained at USD 300 million. Modi said the two sides have decided to scale it up to USD 1 billion by 2020. Both the sides agreed to constitute an expert group between India and Uzbekistan to conduct a Joint Feasibility Study and commence negotiations for the India-Uzbekistan Preferential Trade Agreement by the end of 2018.