India is planning to revive a cluster of colonial-era gold mines - shut for 15 years but with an estimated $2.1 billion worth of deposits left - as the world`s second-largest importer of the metal looks for ways to cut its trade deficit, officials said. 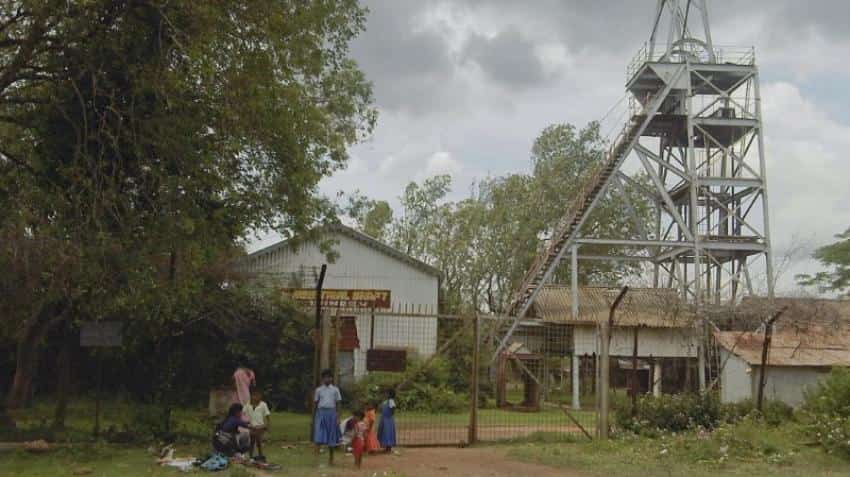 Schoolchildren play in front of an abandoned shaft at Kolar Gold Fields, located in the southern Indian state of Karnataka. Pic: Reuters
Written By: Reuters

India is planning to revive a cluster of colonial-era gold mines - shut for 15 years but with an estimated $2.1 billion worth of deposits left - as the world`s second-largest importer of the metal looks for ways to cut its trade deficit, officials said.

State-run Mineral Exploration Corp Ltd has started exploring the reserves at Kolar Gold Fields, in the southern state of Karnataka, to get a better estimate of the deposits, according to three government officials and a briefing document prepared by the federal mines ministry that was seen by Reuters.

The ministry has also appointed investment bank SBI Capital to assess the finances of the defunct state-run Bharat Gold Mines Ltd, which controls the mines, and the dues the company owes to workers and the authorities, said the officials, who are involved in the process.

Gold is a mainstay of Indian culture, serving as the primary vehicle for household savings for hundreds of millions of people in Asia`s third-largest economy. Gold jewellery is considered one of the best gifts for gods and humans alike, and the spike in demand during the wedding season that peaks in November and December can move global prices of the metal < XAU=>.

Balvinder Kumar, the top civil servant at the federal mines ministry, said getting the Kolar mines going would help the government bring down its import bill.

Initial Mineral Exploration Corp estimates show reserves worth $1.17 billion in the mines, according to the briefing document. Another $880.28 million in gold-bearing deposits is estimated left over in residual dumps from previous mining operations.

"These mines have huge potential," Kumar said, adding that the initial estimates were conservative. "We feel there is more. The whole belt has a lot of potential in terms of untapped gold."

The document does not give an estimate of how much it would cost to restart the mines.

The Kolar fields, located about 65 km (40 miles) northeast of the technology hub of Bengaluru, are among the world`s deepest gold mines.

Mining was started there by John Taylor and Sons, a British engineering firm, in 1880, when Britain ruled India. The area, now mostly a ghost town, still has the colonial-era clubs, houses and even a golf course that were built for its executives.

India took over Kolar soon after independence in 1947, but struggled to profitably mine the reserves. In 2001, Bharat Gold was forced to cease operations due to mounting losses, the result of a large, unproductive workforce and dated, economically unviable methods of mining.

Over the next 15 years, successive federal and state governments have tried to revive the mines or to sell them off, often disagreeing on the course of action and taking their disputes to the courts.

The two have to agree because the federal government has the "surface right" over the mines, but Karnataka is responsible for granting the licence to operate there. In 2013, Karnataka let Bharat Gold`s mining lease expire.

Now, both the federal and the state governments want to have another go at reviving the mines, hoping to learn from past mistakes, according to the briefing document and the officials. The federal government has already sent a request to Karnataka to renew Bharat Gold`s mining lease.

The document seen by Reuters says Bharat Gold owes "huge liabilities" to the central and state governments, as well as banks and the electricity authorities in Karnataka. SBI Capital is looking to give an assessment for a one-time settlement of its dues, according to the document and the officials.

The investment bank is expected to give its report by the end of this month, while Mineral Exploration Corp would complete its assessment by July, according to the officials.

If the reports show that mining is viable, the government would seek to restructure Bharat Gold to restart mining there more efficiently, the officials said.

Kumar, the top mining official, said the next step would be to seek the federal cabinet`s approval to get the project going.