Independence Day 2018: Prime Minister Narendra Modi today said India will be the engine of growth for the world economy for the next three decades as the "sleeping elephant" has started to run on the back of structural reforms like GST. 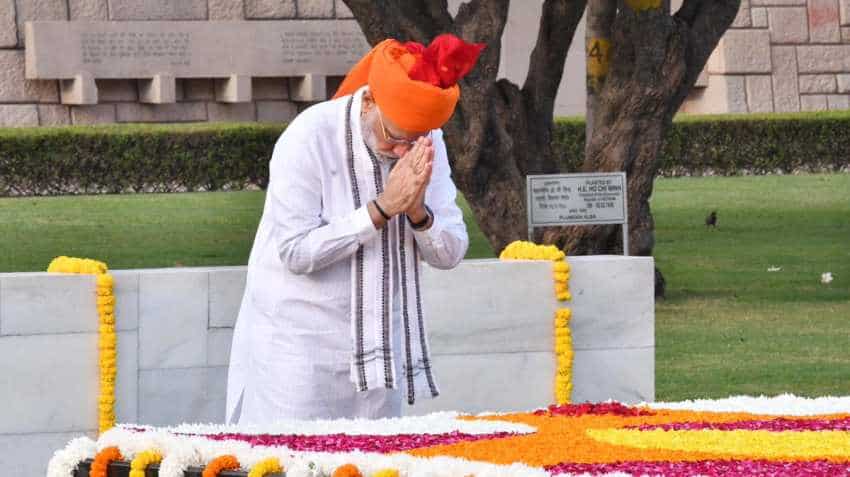 PM Narendra Modi pays homage to the Father of the Nation Mahatma Gandhi on the occasion of Independence Day 2018. Image: Twitter/@PIB

Independence Day 2018: Prime Minister Narendra Modi today said India will be the engine of growth for the world economy for the next three decades as the "sleeping elephant" has started to run on the back of structural reforms like GST. Addressing the nation from the ramparts of the Red Fort on the occasion of 72nd Independence Day, he listed out the pace of reforms in the last four years of his government that pulled out the country from being considered a "fragile and risky" economy to being the fastest in the world.

Prior to 2014, India was likened to policy paralysis and delayed reforms. "India was considered among 'fragile five' but today the world is seeing it as a destination of multi-billion dollar investment. The narrative has changed," he said.

The government's motto, he said, is reform, perform and transform. Red tape has been replaced with 'red carpet', propelling India on the ease of doing business ranking, he said. Bottlenecks were a topic of discussions among international institutions and experts prior to 2014 but "today they are saying the sleeping elephant has woken up and has started running".

The comment was an apparent reference to International Monetary Fund's commentary on India last week in which it said the country is on track to hold its position as one of the world's fastest-growing economies as reforms start to pay off. "We have the potential to take tough decisions. We are not partisan," he said. "Prior to 2014, global institutions used to say the Indian economy is risky. Today the same institutions and people are saying that reform momentum is giving strength to fundamentals," the PM said.

PM Modi went on to list structural reforms like Goods and Services Tax (GST), bankruptcy and insolvency law and benami property law that helped transform the economy.
Electrifying all villages, providing 5 crore cleaner cooking gas to poor women, doubling the pace of highway construction, record foodgrain production, record mobile phone manufacturing, and building four-time more new houses in villages were some of the achievements of his government, he said.

If the work continued at the pace that was prevalent in 2013, it would have taken one or two more decades to electrify all villages, 100 years to provide LPG gas connections to all and generations to take optic fibre to villages.

Modi said the government fulfilled the promise to provide 50 per cent more than the cost of production for kharif crops to farmers and is on the way to achieve the target of doubling farm income by 2022.

Prime Minister Narendra Modi today announced that his government will launch an ambitious healthcare scheme on September 25 this year which will benefit 50 crore  citizens of the country. PM said the Pradhan Mantri Jan Arogya Abhiyaan (Ayushman Bharat) will be launched on September 25 on the birth anniversary of Pandit Deendayal Upadhyay. "The healthcare initiatives of the government will have a positive impact on 50 crore Indians," he said.

"It is essential to ensure that we free the poor of India from the clutches of poverty due to which they cannot afford healthcare." The ambitious Ayushman Bharat-National Health Protection Mission (AB-NHPM) aims to provide a coverage of Rs 5 lakh per family annually, benefiting more than 10 crore poor families.

The scheme aims to target poor, deprived rural families and identified occupational category of urban workers' families, 8.03 crore in rural and 2.33 crore in urban areas, as per the latest Socio Economic Caste Census (SECC) data, and will cover around 50 crore people.
Asserting that technology will play a crucial role in the implementation of the programme, he said in four to six weeks, testing of these technology tools under the scheme will start. He said the Swachh Bharat Mission will enable lakhs of children in leading healthier lives.

An Indian astronaut, be it a man or a woman, will go on a space odyssey by 2022 on board 'Gaganyaan'. PM said when India celebrates 75th year of Independence in 2022, "and if possible even before, an Indian son or daughter" will undertake a manned space mission on board 'Gaganyaan' "carrying the national flag".
Chandrayaan-1 was India's first lunar probe. It was launched by the Indian Space Research Organisation in October 2008 and operated until August 2009.
Mangalyaan is another Indian space project. The Mars Orbiter Mission (MOM), also called Mangalyaan, is a space probe orbiting Mars since September 24, 2014.

"India has registered its name as the sixth largest economy in the world. It has created positivity. We are celebrating the festival of freedom in such a positive atmosphere," Modi said in his last Independence Day speech before the 2019 elections.

"The country is brimming with self-confidence and is regularly crossing new heights."