Jyotiraditya M. Scindia, Union Minister of Civil Aviation, spoke about the important features of the PLI Scheme and said that under the PLI scheme, incentives of Rs 120 crore will be given in the next 3 years. 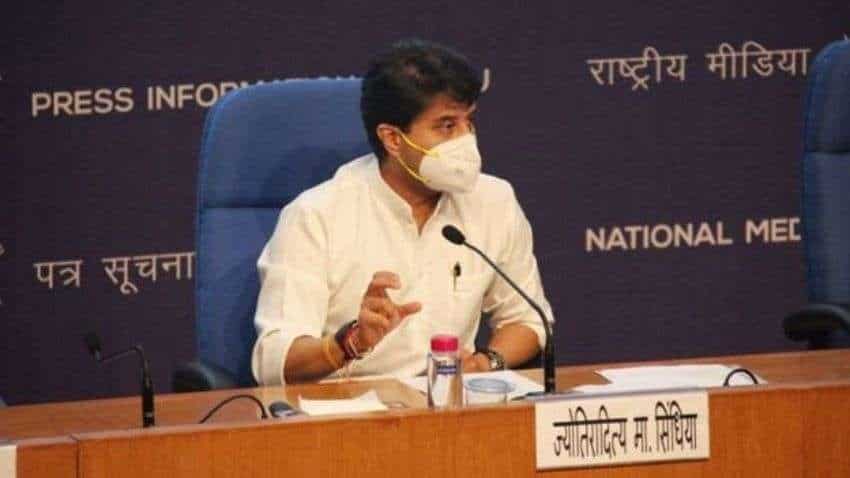 Taking another step towards the vision of an Aatmanirbhar Bharat, the Central Government under the leadership of Prime Minister Narendra Modi, has approved the Production-Linked Incentive (PLI) scheme for dronesand drone components on 15 September 2021.

Jyotiraditya M. Scindia, Union Minister of Civil Aviation, apprised the media about the important features of the PLI Scheme in a press conference on Thursday. He said that under the PLI scheme, incentives of Rs 120 crore will be given in the next 3 years.

This amount is 1.5 times the combined size of the manufacturing drone sector. Over a period of three years, estimated investment worth Rs 5,000 Crore for manufacturing sector drones will be done which in turn will bring a turnover of Rs 900 crore, and 10,000 job opportunities will be created.

He further added that the objective is to establish India as a global drone hub by 2030 and Ministry of Civil Aviation is committed to facilitate industry, service delivery and consumers in achieving the aforesaid target.

Top features of the PLI Scheme for Drones, 2021

1. The total amount allocated for the PLI scheme for drones and drone components is INR 120 crore spread over three financial years.  This amount is nearly double the combined turnover of all domestic drone manufacturers in FY 2020-21.

2. The incentive for a manufacturer of drones and drone components shall be as high as 20% of the value addition made by her.

4. The Government, has agreed to keep the PLI rate constant at 20% for all three years, an exceptional treatment given only to the drone industry.  In PLI schemes for other sectors, the PLI rate reduces every year.

5. The proposed tenure of the PLI scheme is three years starting in FY 2021-22.  The PLI scheme will be extended or redrafted after studying its impact in consultation with the industry.

6. The Government has agreed to fix the minimum value addition norm at 40% of net salesfor drones and drone components instead of 50%, another exceptional treatment given to the drone industry. This will allow widening the number of beneficiaries.

8. The list of eligible components may be expanded by the Government from time to time, as the drone technology evolves.

9. The Government has agreed to widen the coverage of the incentive scheme to include developers of drone-related IT products also.

10. The Government has kept the eligibility norm for MSME and startups in terms of annual sales turnover at a nominal level - INR 2 cr (for drones) and INR 50 lakhs (for drone components).  This will allow widening the number of beneficiaries.

12. The incentive payable to a manufacturer of drones and drone components shall be simply one-fifth of her value addition as illustrated below for a sample year (say, FY 2021-22):

13. PLI for a manufacturer shall be capped at 25% of total annual outlay. This will allow widening the number of beneficiaries.

Drones offer tremendous benefits to almost all sectors of the economy. These include– agriculture, mining, infrastructure, surveillance, emergency response, transportation, geo-spatial mapping, defence, and law enforcement to name a few.  Drones can be significant creators of employment and economic growth due to their reach, versatility, and ease of use, especially in India’s remote and inaccessible areas.

Given its traditional strengths in innovation, information technology, frugal engineering and its huge domestic demand, India has the potential of becoming a global drone hub by 2030.

The PLI scheme comes as a follow-through of the liberalisedDrone Rules, 2021 released by the Central Government on 25 August 2021.  The PLI scheme and new drone rules are intended to catalyse super-normal growth in the upcoming drone sector.