"As democracies around the world are under threat, it is imperative that we defend democratic principles and institutions within our respective countries and around the world," US Vice President Kamala Harris told Prime Minister Narendra Modi. 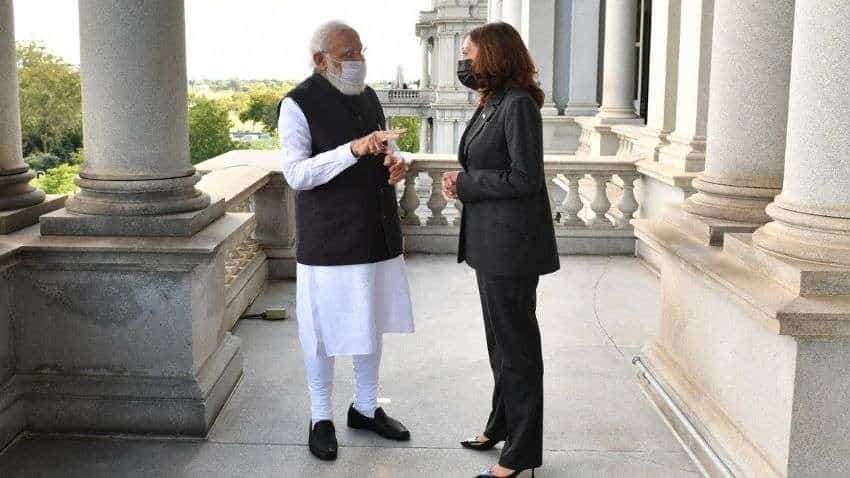 Voicing concern over the threat to democracies around the world, Vice President Kamala Harris has underscored the need to defend democratic principles and institutions in both India and the US.

Harris made the remarks on Thursday in a joint media appearance with Prime Minister Narendra Modi before their first in-person meeting at the White House during which they decided to further cement the Indo-US strategic partnership and discussed global issues of common interest, including Afghanistan and the Indo-Pacific.

"As democracies around the world are under threat, it is imperative that we defend democratic principles and institutions within our respective countries and around the world," Harris told Prime Minister Modi.

"And that we maintain what we must do to strengthen democracies at home and it is incumbent on our nations to of course protect democracies in the best interests of people of our countries,? she said in her remarks as she welcomed Modi to her ceremonial office.

"I know from personal experience and from my family of the commitment of the Indian people to democracy, and the work that needs to be done (so that) we can begin to imagine, and then actually achieve our vision for democratic principles and institutions,? said 56-year-old Harris, whose mother - Shyamala Gopalan - was a cancer researcher and civil rights activist from Chennai.

According to The Economist Intelligence Unit in February, India slipped two places to 53rd position in the 2020 Democracy Index's global ranking. However, India is ranked higher than most of its neighbouring countries.

Commenting on the attack, Biden had said, ?This was not dissent. It was a disorder. It posed an existential crisis and a test of whether our democracy could survive - a sad reminder that there is nothing guaranteed about our democracy."

When asked about Harris' comments on democracy, Foreign Secretary Harsh Vardhan Shringla told the media that the Vice President appreciated the fact that both the countries represented large and successful democracies and that "we needed to continue to work not only within our own countries, but with other countries, to promote the brand of democracy."

"In the discussions, I think she did mention that the US Congress was highly appreciative and kept noting the fact that India and the US represented the two largest democracies. There was a great deal of appreciation of how both our democracies function. And that was I would say discussion that took place in the actual meeting, which, in which the media were not present," Shringla told the media in response to a question.

Harris said the world is more interconnected and more interdependent than ever before. "And the challenges that we face today have highlighted that fact. COVID-19, climate crisis and the importance of our shared belief in the Indo-Pacific region," she said.

The two leaders were wearing masks as they both spoke in front of a battery of pool reporters from both India and the US.

Describing India as a "very important partner" to the US, Harris said that she looks forward to discussing how the two countries can continue to best work together to strengthen their relationship around their mutual concerns and the challenges they face, but also the opportunities that those challenges present.

She had earlier spoken with Modi over phone on June 3.

"Throughout our history, our nations have worked together and stood together, to make our world a safer and stronger world.

"Mr Prime Minister, when you and I last spoke, we talked about how our world is interconnected" and the challenges that we face today highlighted that fact" with COVID-19, the climate crisis and the importance of our shared belief in a free and open Indo-Pacific region," Harris said.

She said that early in the COVID-19 pandemic, India was a vital source of vaccines for other countries.

"When India experienced a surge of COVID? the United States was very proud to support India and needed its and responsibility to vaccinate its people," she said.

Harris welcomed India's announcement that it will soon be able to resume vaccine export and it is of particular note and admiration that India is currently vaccinating approximately 10 million people a day.

"The President and I believe very strongly that the United States working together with India would have not only a profound impact on the future of our respective nations but on the world itself? on climate, she said.

"And as it relates to the Indo-Pacific, the United States, like India, feels very strongly about the pride of being a member of the Indo Pacific, but also the fragilities of the importance and the strength as well of those relationships, including maintaining a free and open Indo Pacific,? the Vice President said.

Harris also touched upon the issue of climate change.

"On the issue of the climate crisis, I know that India and we take this issue quite seriously. The President and she believe very strongly that the United States working together with India would have a profound impact on people of the two countries," she added.

The two leaders met a day ahead of the maiden bilateral meeting between Modi and President Biden and the Quad Leaders' Summit at the White House on Friday.