It's the month when summer slips into autumn and festivities are in the air with Durga Puja celebrations but October is also when violent cyclones are likely to batter India's eastern coast, as Mrityunjay Mohapatra knows only too well. 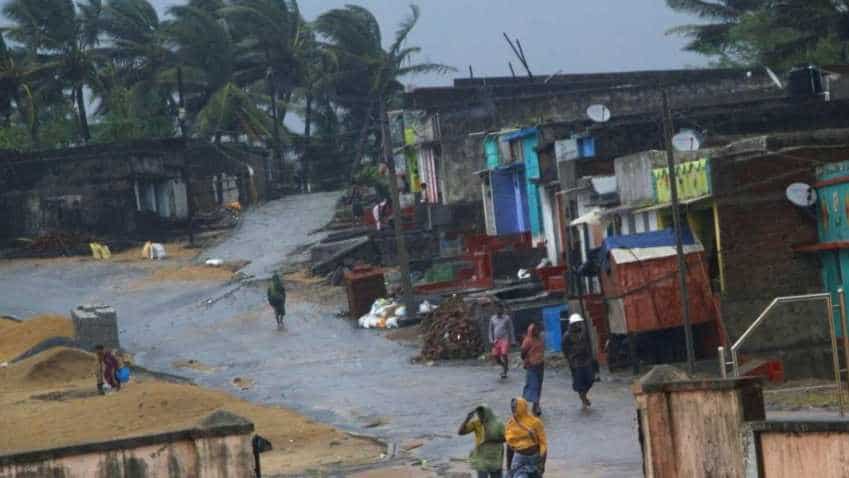 Cyclone are a regular phenomenon in Odisha and Andhra Pradesh in October-November. For Mohapatra, cyclones come with the distressing memories of childhood. Photo courtesy: PTI
Written By: PTI
RELATED NEWS

New Delhi: It's the month when summer slips into autumn and festivities are in the air with Durga Puja celebrations but October is also when violent cyclones are likely to batter India's eastern coast, as Mrityunjay Mohapatra knows only too well.

It has been 13 years since the additional director general of the India Meteorological Department (IMD), who specialises in predicting and monitoring cyclones, went home to his village in Odisha for Durga Puja.

This year was no different, said India's 'cyclone man', who spent the festival week tracking Cyclone Titli that struck the coasts of Odisha and Andhra Pradesh, killing over 50 people, and Cyclone Lubna that hit Yemen.

IMD is in charge of the north Indian Ocean region. Mohapatra, 53, and his team have been busy tracking and predicting the two cyclones --Titli hit early morning of October 11.

"My entire team was in office as we were giving hourly updates," Mohapatra told PTI.  Mohapatra and his team won praise from the World Meteorological Organisation, a UN body, for their precise prediction.

It is not the first time that Mohapatra's team has won accolades. Their precise forecast led to many lives being saved when Cyclones Phailin (2013), an ?extremely severe cyclone?, and Hudhud (2014), hit the state.

Cyclone are a regular phenomenon in Odisha and Andhra Pradesh in October-November.  For Mohapatra, cyclones come with the distressing memories of childhood.  On October 29, 1971, a deadly cyclone, which claimed 10,000 lives, hit the Odisha coast and also his village in Bhadrak district.

He was only six at the time but the vision of his ravaged village remains etched in his mind.  At that time, there was no system of cyclone prediction. No one in our village owned even a radio so there was no question of us knowing about the impending natural calamity.

My father stepped out for some work and realised the flow of the streams in our village had surged due to the storm and saline water was steadily increasing,? Mohapatra said.  There were only two 'pucca' houses in the village, barely five kilometres from the coast. One of them belonged to the Mohapatra family and nearly 300 people took refuge there.

Among those killed were one of Mohapatra's uncles. Once the waters abated, people died of water borne diseases, he said.  Eleven years later, in October 1982, another deadly cyclone hit the state, again killing nearly 10,000 people.

Mohapatra's family lost the entire paddy crop, the only source of income for the family.  At that time there was hardly anything to eat. The paddy crop across the cyclone-hit state was destroyed,? he said.  The two disasters left an indelible impression.

After completing his masters in Physics, he joined the Defence Research and Development Organisation (DRDO) laboratory in Chandipur.  ?This was also the time that the first Agni missile was tested in 1988.

After the successful test, (former president and then a senior scientist at the DRDO) Dr APJ Abdul Kalam shook hands with everyone in the team,? he said.  The job as a scientific assistant did not give him the satisfaction he was seeking, so he took up a job as a lecturer at a government college in Bhubaneswar. When there was an opening at the IMD, he knew it was his calling.

I was earning more as a professor, but there was little scope of research. Plus the childhood hardships haunted me,? Mohapatra said. He was also a part of the cyclone warning division at the Bhubaneswar when the 1998 super cyclone hit Odisha and Andhra Pradesh. It was the also the time the IMD decided to gear up in a major way to invest in the prediction of cyclones.

By 1998, our monitoring of cyclone had improved, but not the forecasting,? Mohapatra said. After getting transferred to Delhi, Mohapatra has been working mostly on cyclone prediction.  However, the Cyclone Warning Division and the IMD got a bad name during Cyclone Ockhi 2017 that killed several people in Kerala.  The state government also alleged that the IMD failed to provide precise forecast.