As per Nirmal Bang Research, RBI intervention is decreasing as forex market turnover has more than trebled in past decade indicating INR to be more market-determined or more sensitive to foreign portfolio flows. 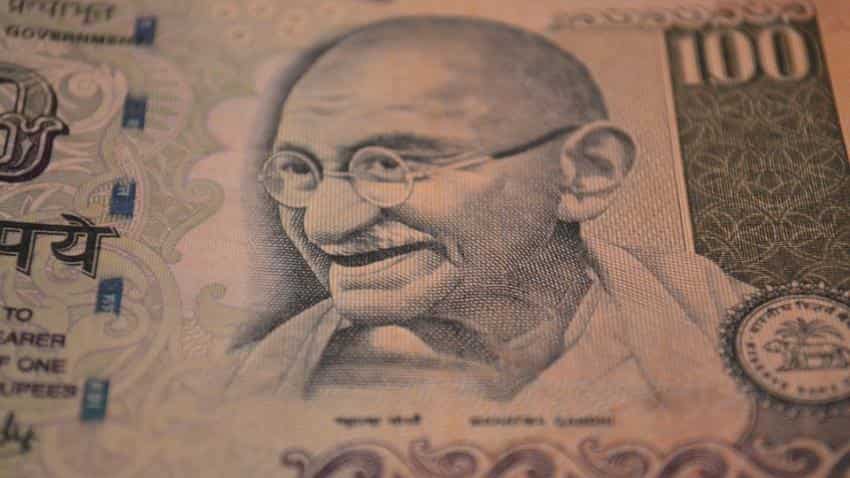 Rupee closed at a 17-month high of 65.04 appreciating by 37 paise in one session highest since October 28, 2015. Photo: Reuters: Pixabay
Written By: Pooja Jaiswar
RELATED NEWS

Indian Rupee continues to outperform its Asian peers over the past three months and has touched 17-months high against the US Dollar.

SS Mundra, Deputy Governor of Reserve Bank of India (RBI) on Monday said, “The RBI does not target any range for the domestic currency and intervenes only to curb volatility.”

He added, “What we have mentioned is that this is not a situation where there can be a 'one model fits all'. There are already several tools which are available... If need be, if some more tools are required it can also be thought of.”

Also Read: Analysts had expected Rupee to cross 70; it is now among best performers in Asia

Rupee's performance has been an outcome of improvement in macroeconomic factors like decline in current account deficit (CAD), higher levels of foreign reserves and lower inflation. A part of the appreciation-level was also added by PM Narendra Modi's BJP government win in State Elections 2017 and US Federal Reserve 25 basis point rate hike which weakened dollar index further.

Mundra's announcement came hours after when rupee closed at a 17-month high of 65.04 on Monday, appreciating by 37 paise in one session – a highest closing for the domestic currency since October 28, 2015 – where it settled at 64.93-level.

As per Nirmal Bang Research, RBI intervention is decreasing as forex market turnover has more than trebled in past decade indicating INR to be more market-determined or more sensitive to foreign portfolio flows.

NSDL data show that FPI/FII are net buyers by investing a total of Rs 52,309 crore from January 2017 - till date in both debt and equity markets.

To maintain right amount of volatility, RBI has actively intervened in the spot market. Usually, RBI purchases USD in times of heavy inflows and sells in times of outflows, thereby limiting swings in INR.

The central bank also stepped up its intervention in the period after the taper tantrum of 2013, which involved the Foreign Currency Non Residential (FCNR) scheme. 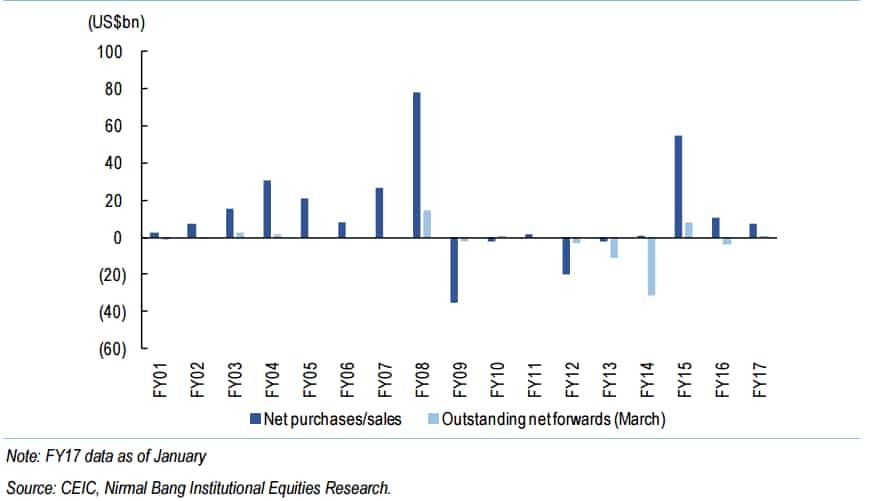 However, this intervention of RBI is now declining.

Such results in limited scope for RBI to intervene in exchange rate.

Teresa John, analyst, Nirmal Bang said, "For the RBI to effectively stem INR depreciation, it will have to draw down a larger share of its reserves, weakening macro fundamentals in the interim which may lead to capital outflows and result in further depreciation. "

In times of INR appreciation, John said, "RBI will have to buy more USD to effectively stem appreciation, which increases liquidity in the system. The higher level of liquidity could potentially be inflationary unless sterilised, and sterilisation through issuance of Market Stabilisation Scheme (MSS) bonds could mean higher costs to the exchequer."

However, from Nirmal Bang's survey markets are anticipating INR to depreciate from current levels in the next 12 months.

The report said, "A higher current account deficit or CAD going forward and inflation differentials with the developed world suggests a depreciation bias too."