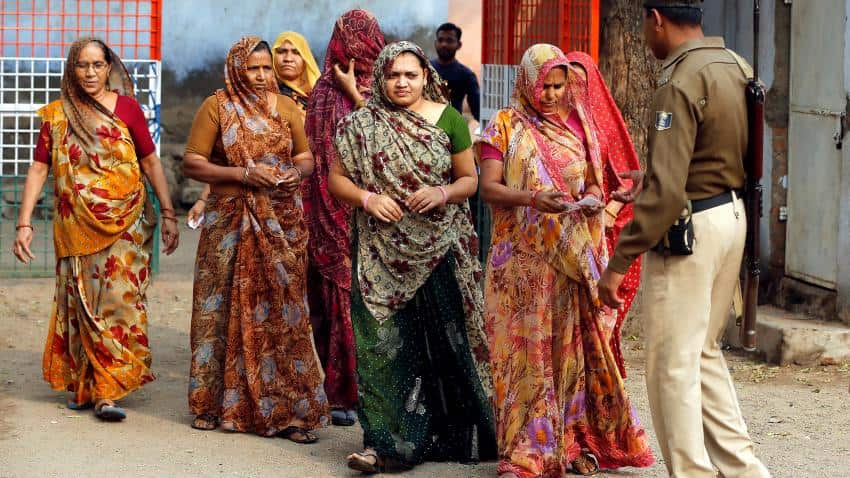 A policeman checks identity papers of women as they arrive to cast their votes at a polling station during the first phase of Gujarat state assembly election. Image Source: Reuters
Written By: Reuters
RELATED NEWS

Tens of thousands of people voted in the first stage of assembly elections in Gujarat on Saturday, where Prime Minister Narendra Modi faces his toughest electoral test since coming to power with a landslide victory in 2014.

Modi has himself led the campaign to ensure that his Bharatiya Janata Party (BJP) retains power in his home state, as a combined opposition mounted the biggest challenge ahead of the general election in 2019.

Voters started turning up early in the morning and some had to wait for about 15 minutes due to a malfunction in the electronic voting machine.

In the first few hours, more than 15 percent of voters in Surendranagar district cast their ballot, according to state government officials.

The surveys have often gone wrong, though, and Modi himself remains far more popular across the country than his rivals, including Rahul Gandhi who is leading the Congress charge to weaken Modi in his home base.

Votes from the election will be counted on Dec. 18 and the results announced the same day.

In the first stage of state assembly elections on Saturday, 977 candidates are trying their luck in 89 constituencies spread across 19 districts of Gujarat, according to the Election Commission.

More than 21 million people will vote during the first stage of the election on Saturday.

Modi has thrown himself into the campaign, addressing dozens of rallies over the past month, saying he alone could deliver on development.

Gujarati businesses, which form the core of Modi`s support base, have complained that the Goods and Services Tax introduced this year and late last year`s shock move to abolish 500 and 1,000 rupee bank notes, accounting for 86 percent of cash in circulation, aggravated already tough economic conditions.

Hindu-majority Gujarat is one of India’s richest and fastest growing states but also one of its most communally divided.

About 1,000 people, mostly Muslims, were killed after a wave of riots rocked Gujarat in 2002, when Modi was chief minister. A Supreme Court investigation found no case against Modi, who denied any wrongdoing.