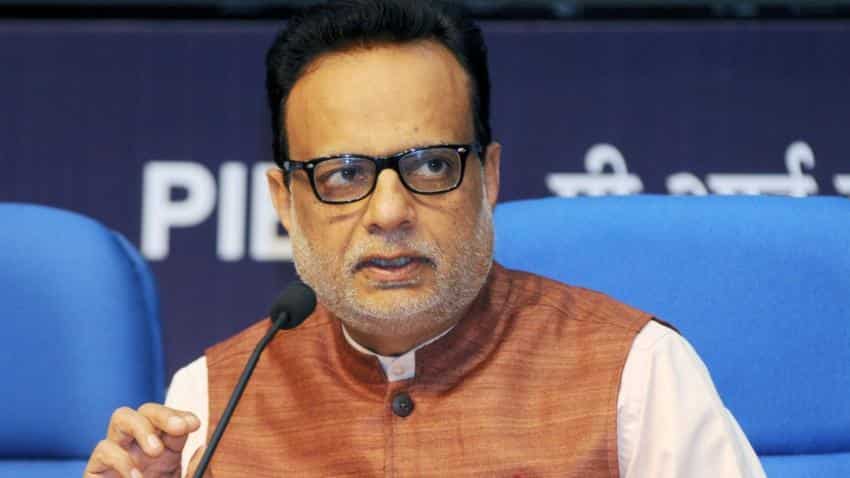 Adhia said the figures are usually released between the 24th and 26th of every month, but the end-month figures end up a few thousand crore rupees higher than the initial figures. Image source: IANS
Written By: IANS
RELATED NEWS

Revenue collection under the Goods and Services Tax (GST) increased by Rs 1,217 crore in February to Rs 89,264 crore as per the month-end figures, Finance Secretary Hasmukh Adhia said on Monday. Last week, the Finance Ministry released initial figures of the GST collection for February which showed a decline in revenue by Rs 1,144 crore compared to January. The data then showed that February collection was Rs 85,174 crore.

Adhia said the figures are usually released between the 24th and 26th of every month, but the end-month figures end up a few thousand crore rupees higher than the initial figures. "GST collection for February (collected in March) stand at Rs 89,264 crore showing an upswing in revenue collection trends. Now we are approaching the Rs 90,000 crore mark," he said.

As per the figures released by the government, the GST collection for January stood at Rs 88,047 crore. In December, it was Rs 88,929 crore.

Noting that February was a 28-day month, Adhia attributed the upswing in collections to increased compliance and the end of the financial year when people like to clear their dues.

"GST collections will pick up further as compliance requirements are enforced like the rollout of the e-way bill from this month."

He added that even though "it was a year of uncertainty in terms of revenue, the government broadly managed to achieve both direct and indirect tax targets" for the fiscal.

"We are also confident about meeting the fiscal deficit target," Adhia said.

Calling the rollout of e-way bill "very successful and with no glitches", the Finance Secretary said at this rate, the government will soon launch the same for intra-state movement of goods as well.

"This means that around 60,000 e-way bills are being generated every hour. We expect this number to rise further. We are prepared for even higher traffic."

He said while over 11 lakh dealers had registered for the e-way system, over 20,000 transporters had also registered.