Finance Minister Nirmala Sitharaman on September 10 shrugged off questions on the GDP growth declining to 5 per cent in Q1FY20. 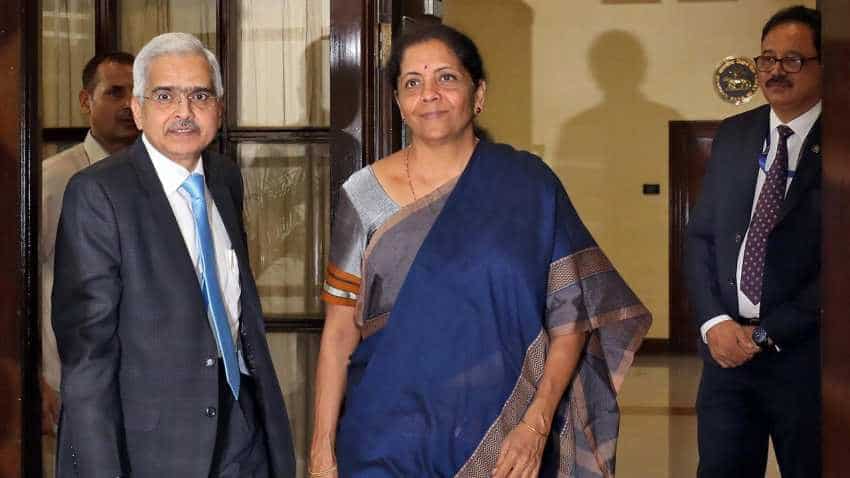 Sitharaman said a dip in the GDP is part of the growth cycle and the government is conscious that it has to respond. Photo: Reuters
Written By: IANS
RELATED NEWS

Finance Minister Nirmala Sitharaman on September 10 shrugged off questions on the GDP growth declining to 5 per cent in Q1, saying a dip in growth is part of the process and the government will front-load infra spending as much possible to revive demand and consumption in the economy. Sitharaman said a dip in the GDP is part of the growth cycle and the government is conscious that it has to respond.

"It`s not that government is not responding with measures to boost GDP. A dip in GDP is part of growth. Our full focus is now on how GDP can rise in the next quarter," she said while addressing media on the actions and decisions of her ministry in 100 days of Modi 2.0.

"We will try to front-load infra spending as much as possible," she added, adding: "We are taking steps to increase consumer confidence in market."

Sitharaman also said the government is working on a few steps for the auto industry.

"Government is conscious on the need to respond to the slowdown in the auto sector," she said.

The auto industry is a big job creating industry and reported a 23 per cent drop in sales, lowest since 1997-98 is in the grip of a severe slowdown has evoked a lot of concern.

Responding to a query over GST rate cut for auto industry, Sitharaman said it is a matter to be decided by the GST council. She said the government is conscious on the need to respond to check the auto slowdown.

"Decisions on rate cuts are only privy to GST Council," she added.

The minister also expressed worry over the low GST revenue collections. The gross GST collection in August 2019 stood at Rs 98,202 crore, up 4.51 per cent from Rs 93,960 crore in the same month last year. The GST collection, although higher on year-on-year basis, is still lower than government`s expectations of Rs 1 trillion.

Sitharaman also said that the government will respond to home buyers` problems soon, adding that there was a need to work with other ministries for resolution of their problems.

"Government`s response on home buyers will be sooner than later," she said.

On the spate of PSU bank mergers announced by her government that converted 10 PSU banks into four, Sitharaman said that the effective dates of bank mergers to be decided by the individual bank boards.

Each bank board will announce PSU merger dates individually, the Minister added.

"Banks are grappling with low credit offtake recently and we are taking steps to boost consumer confidence in the market.

"The idea to merge the banks was so that all banks can benefit from each other," she said, adding that she is not aware of any unhappiness yet among the bank employees about the mergers.

She said the government has provided eight crore gas connections to people in rural areas under the PM Ujjwala Yojana, created a code on wages for equal employment opportunities for women and will soon come out with decisions on realty sector.

On the financial development of Jammu and Kashmir, she said: "J&K wont suffer any financial loss due to removal of Article 370".

The steps taken so far from government are: Giving in to the demands of overseas investors, the government rolled back the enhanced surcharge on foreign portfolio investors levied in the Budget. Data showed FPIs have pulled out Rs 23,000 crore from domestic equities in July and August.

For the auto sector, it announced that BS IV vehicles bought before March 31, 2020 will remain operational for their full period of registration. Further, the decision to hike the one time registration fee on vehicles was also deferred till June 2020. The ban on purchase of vehicles by government departments was lifted, and an additional 15 per cent depreciation, taking it to 30 per cent, allowed on vehicles acquired from now till March 2020.

In a major relief to entrepreneurs and startups, the FM said that the `angel tax` provision will be withdrawn for startups and their investors.

The government also assured micro, small and medium enterprises (MSMEs) that they get all their pending GST refunds within 30 days, and further, all GST refunds will be paid within 60 days from the date of application. A decision on recommendations of the U.K. Sinha Committee regarding ease of credit, marketing, technology and delayed payments to MSMEs will be taken within 30 days.

It has also announced recap of Rs 55,250 crore in the PSU banks after announcing the mega mergers of 10 banks.