Greater Hyderabad Municipal Corporation (GHMC) Elections Results have been declared, and now all eyes are on the mayor's post. 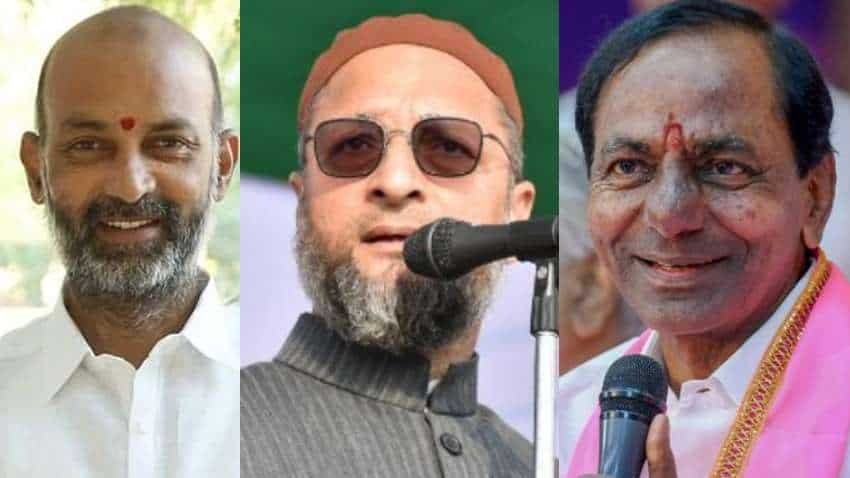 In the GHMC polls, TRS won 55, while the BJP, AIMIM and Congress secured 48, 44 and two wards respectively. Pics from Twitter and PTI.
Written By: Prashant Singh
Edited By: Harish Dugh
RELATED NEWS

Greater Hyderabad Municipal Corporation (GHMC) Elections Results have been declared, and now all eyes are on the mayor's post. In the GHMC polls, TRS won 55, while the BJP, AIMIM and Congress secured 48, 44 and two wards respectively. The ruling TRS in Telangana has emerged as the single largest party in the GHMC polls, but it may need the support of others to retain the Mayor's post, notwithstanding its strength of ex-officio members, who can participate in voting.

TRS has THIS OPTION - MATHS EXPLAINED!

-The results of 149 wards out of the total 150 were declared (counting was stopped in one ward on Friday owing to a legal issue) and TRS is the single largest party after winning 55 seats.

-The Lok Sabha MPs and MLAs of the city area are ex- officio members of the Greater Hyderabad Municipal Corporation (GHMC). Besides this, the MLCs and Rajya Sabha members, who have their vote in the city, have to give an option choosing the GHMC to be able to vote in the Mayoral poll, they said.

- The number of ex-officio members as on Saturday at 49 though clarity on the matter may emerge when notification for the Mayoral election is issued. Out of the 49, the strength of TRS is 31.

- The party-wise number of ex-officio members is AIMIM- 10, Congress-1 and BJP-3.

- However, the ex-officio members should not have voted during the last six months in the same capacity (in a local body).

- Some of the ex-officio members of GHMC had voted in suburban municipalities earlier and they are not eligible to vote.
- The Municipal Administration Department would send the details on the status of such ex-officio members to the GHMC, the sources said. According to some analysts, TRS may fall short of about 10 members and it may need the support of AIMIM.  This is an option for the TRS to win the Mayor's post.

-However, the TRS may not be too keen on joining hands with the AIMIM, as the BJP, during the GHMC poll campaign had accused the ruling party of having an unholy alliance with the Asaduddin Owaisi-led party.

- The AIMIM staying away from the Mayoral election would also help the cause of TRS.

- Separately, the newly-elected GHMC ward members would have to wait till February to take oath as the term of present body ends on February 10.