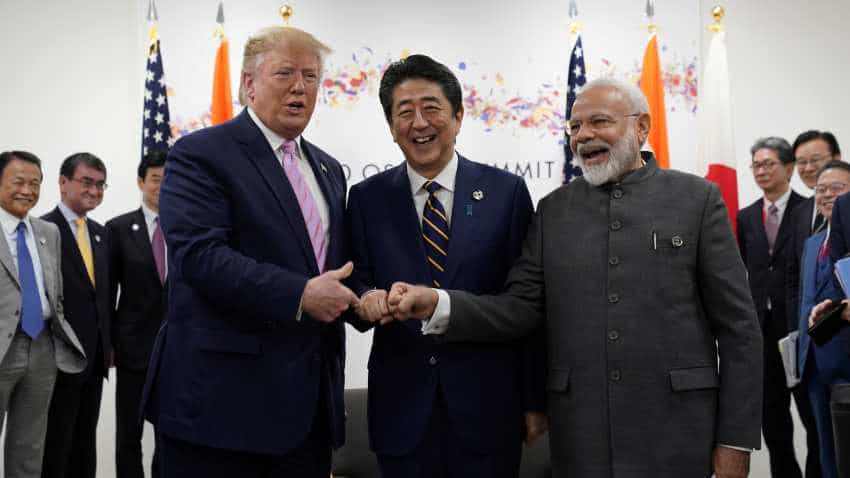 Ahead of the formal opening of the G-20 Summit in Osaka, Japan, Prime Minister Narendra Modi today held a "productive" trilateral meeting with US President Donald Trump and Japanese premier Shinzo Abe, and extensively discussed issues of the Indo-Pacific region, connectivity and infrastructure development. It was the second Japan-America-India (JAI) meeting, where the discussion focused on how the three countries can together work together towards an open, stable and rule-based Indo-Pacific region. The highlights of Japan-America-India trilateral meeting are:

1. PM Modi highlighted "the importance India attaches to" the grouping, and the main topic of discussion was Indo-Pacific, how the three countries can work together in terms of connectivity, infrastructure, ensuring peace and security, and working together to build upon this new concept, Foreign Secretary Vijay Gokhale said.

3. Modi tweeted later, "Today's meeting of the JAI Trilateral was a productive one. We had extensive discussions on the Indo-Pacific region, improving connectivity and infrastructure development. Grateful to PM @AbeShinzo and President @realDonaldTrump for sharing their views as well."

PM @narendramodi with PM of Japan @abeshinzo and President of US @POTUS in a Trilateral Meeting of JAI (Japan-America-India) in Osaka, Japan, pic.twitter.com/Lgsrvl7RUQ

5. On Thursday, PM Modi held wide-ranging talks with Abe on the global economy, issues of fugitive economic offenders and disaster management. Modi will also meet Chinese President Xi Jinping, Russian President Putin and other leaders during the June 28-29 summit. This will be Modi's sixth G-20 Summit.

6. Prime Minister Narendra Modi on Friday held bilateral talks with US President Donald Trump and discussed a host of key issues including trade, defence and 5G communications networks ahead of the formal opening of the G-20 Summit.
Modi said that he wants to discuss Iran, 5G, bilateral relations and defence relations with Trump, and also thanked latter for expressing his "love towards India" in a letter recently delivered by US Secretary of State Mike Pompeo.

7. Trump congratulated Modi on his election victory and said that the two countries would work together in many areas including military, adding "It was a big victiry, you deserve it, you have done a great job. We have big things to announce. In terms of trade, in terms of manufacturing, we would be discussing 5G. I congratulate you and I look forward to talks."

PM @narendramodi meets with President of US @POTUS on the sidelines on #G20Summit in Osaka, Japan. pic.twitter.com/EoGSs4rGVn

8. They met shortly after the Japan-America-India trilateral meeting during which Modi highlighted "the importance India attaches to" the grouping. The Modi-Trump meeting assumes significance as the US president, championing his 'America First' policy, has been a vocal critic of India for levying "tremendously high" duties on US products.

9. Before his arrival in Japan on Thursday, Trump tweeted, "I look forward to speaking with Prime Minister (Narendra) Modi about the fact that India, for years having put very high Tariffs against the United States, just recently increased the Tariffs even further. This is unacceptable and the Tariffs must be withdrawn!"