The Ross Island was renamed as Netaji Subhas Chandra Bose Dweep, the Neil Island as Shaheed Dweep and the Havelock Island as Swaraj Dweep. The three islands are major tourist spots 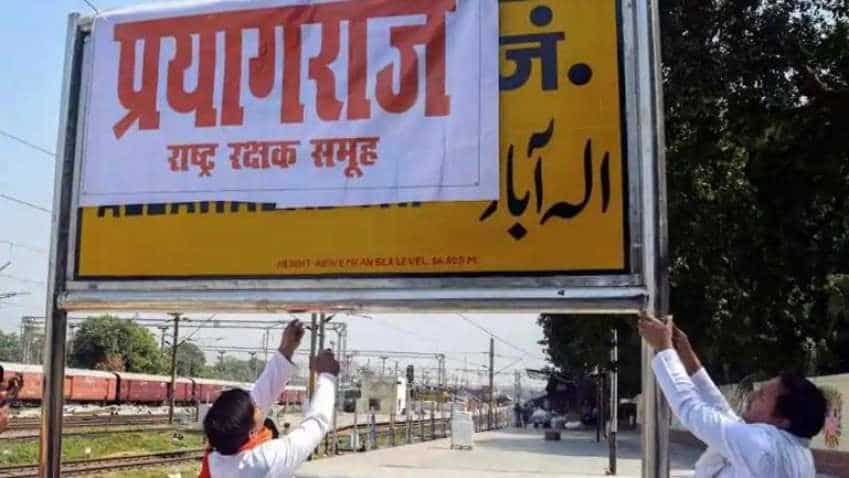 Emboldened by Adityanath's move to rename Allahabad and Faizabad, in November, Bharatiya Janata Party (BJP) MLA Jagan Prasad Garg had sought the renaming of Agra either as Agravan or Agarwal. PTI

From the over 150-year-old Mughalsarari railway station to Allahabad and three iconic islands in Andaman and Nicobar to a World War-era memorial in Delhi, the year gone by witnessed a spate of renaming, many of which sparked public outcry.Mughalsarai station, created as part of the Delhi-Howrah line laid by the British in the 1860s and one of the busiest railway stations of India, was rechristened to Deendayal Upadhyaya in June while Allahabad and Faizabad were renamed Prayagraj and Ayodhya respectively by the Yogi Adityanath government in the latter half of the year.

The rechristening of the station was also slammed by historians and rail experts, some of whom said it amounted to "erasing a landmark chapter" in the evolution of railways in the country and alleged it was done with a "political agenda".

Noted historian S Irfan Habib, lamented the spate of renaming of public places and cities, alleging that for powers that may be, first the British names were a problem and now anything that has a "Mughal or Islamic identity attached to it" from roads to parks.

"Allahabad and Faizabad are historic cities. One can go and see the condition of heritage sites and landmarks in these cities. Instead of investing in that direction, taxpayers' money being wasted on renaming-related work," he said.

The Uttar Pradesh Cabinet in October had approved a proposal to rename the historic city of Allahabad to Prayagraj, months ahead of the Kumbh Mela which begins mid-January.

And close on the heels of renaming Allahabad, Chief Minister Yogi Adityanath announced in November that Faizabad district would henceforth be known as Ayodhya.

"Ayodhya is a symbol of our 'aan, baan aur shaan' (honour, pride and prestige)," he had said at a grand "Deepotsav" event organised in the pilgrim town, about 120 km from state capital Lucknow.

S Chandnibi, associate professor of history at the Aligarh Muslim University, says renaming a city or street or any public place is the "easiest way" for politicians to appease people, when they do not have "real work to show".

"Instead of focussing on real development metrics, like education, health and employment, many elected representatives are busy indulging in renaming bids, and the names are then, in many cases changed in a very undemocratic manner, with no public discussion or consultation," she said.

Emboldened by Adityanath's move to rename Allahabad and Faizabad, in November, Bharatiya Janata Party (BJP) MLA Jagan Prasad Garg had sought the renaming of Agra either as Agravan or Agarwal.

Garg wrote to the chief minister stating that since the people belonging to Agarwal community use to reside in this region, the name of the city should be 'Agravan' or 'Agrawal', drawing mirth on social media.

The renaming exercise in 2018 had begun in January with 'The Teen Murti Chowk' rechristened to 'Teen Murti Haifa Chowk, in the centenary year of the Battle for Haifa (1918) as a symbol of friendship between the people of India and Israel, during the visit of Prime Minister Benjamin Netanyahu.

And as the year drew to an end, Prime Minister Narendra Modi on December 30 announced renaming of three islands of Andaman and Nicobar archipelago as a tribute to Netaji Subhas Chandra Bose.

The Ross Island was renamed as Netaji Subhas Chandra Bose Dweep, the Neil Island as Shaheed Dweep and the Havelock Island as Swaraj Dweep. The three islands are major tourist spots

.Among other renaming exercise, in October the then BJP government in Chhattisgarh had decided to name Naya Raipur, the upcoming capital city of the state, as 'Atal Nagar' in memory of former Prime Minister Atal Bihari Vajpayee.

In August, the Uttar Pradesh government had approached the Centre for its approval to rename the airports in Bareilly, Kanpur and Agra.

According to a proposal from the state civil aviation department, the Bareilly airport is to be named 'Nath Nagri', which is believed to be an ancient name of the city for its history of having ardent worshippers of Lord Shiva.

Kanpur's Chakeri airport is proposed to be named after freedom fighter Ganesh Shankar Vidyarthi. The proposal says that Kanpur was earlier known as Kanha Pur and was founded by Sachendi King Hindu Singh.

The Agra airport is proposed to be named after RSS thinker Deendayal Upadhyaya.

Experts say with elections due in 2019, more renaming proposals might come up this year.