Farmers protest in Delhi: Undeterred by the winter chill, thousands of farmers waited it out at various border points of Delhi for the tenth day on Saturday with their representatives slated to meet the government for fifth-round of talks to push for repealing the new farm laws. 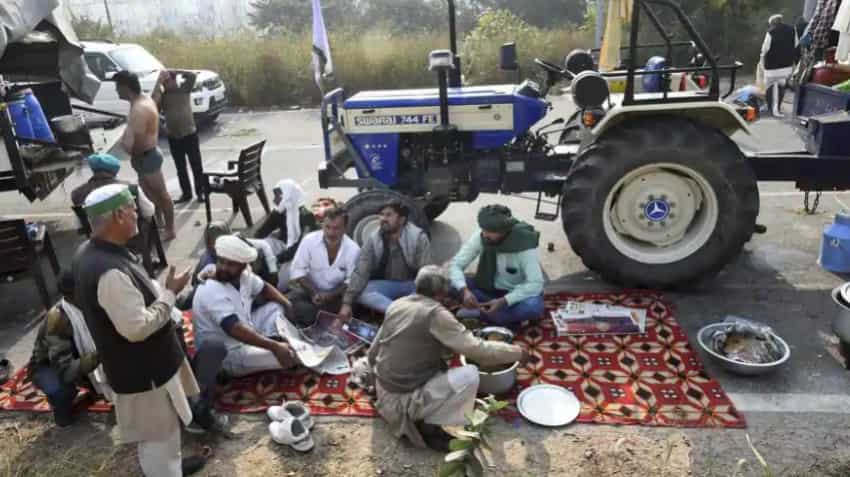 Farmers protest in Delhi: Undeterred by the winter chill, thousands of farmers waited it out at various border points of Delhi for the tenth day on Saturday with their representatives slated to meet the government for fifth-round of talks to push for repealing the new farm laws.

The protesting farmers, who have already blocked many key routes leading to Delhi from Haryana and Uttar Pradesh, on Friday threatened to intensify their agitation and block more roads if the government did not accept their demand. They have also called for a 'Bharat bandh' on December 8.

Before the meeting with the government in the afternoon, leaders of around 40 farmer unions will discuss their strategy to press their demands.

They have also given a call to protest against the central government and corporate houses, and burn their effigies on Saturday.

The fourth-round talks between the government and agitating farmer unions on Thursday failed to end the standoff over the new farm laws.

The blockade at the borders of Delhi, including at Tikri, Singhu, Jharoda, Ghazipur and Chilla, has thrown traffic out of gear.

The diversion of traffic from these border points has led to long jams on alternative routes in the national capital.

However, if anyone needs to commute towards Harayana, they can go via Dhansa, Daurala, Kapashera, Rajokri National Highway-8, Bijwasan/Bajghera, Palam Vihar and Dundahera Borders, police said.

The Badusarai border remained open only for light motor vehicles like cars and two wheelers, they said.

The Chilla border on the Noida link road also remained closed for traffic from Noida to Delhi due to farmers protests near Gautam Budh Dwar.

Similarly, police have kept the Ghazipur border on National Highway-24 shut for traffic coming from Ghaziabad to Delhi.

Enacted in September, the three farm laws have been projected by the government as major reforms in the agriculture sector that will remove middlemen and allow farmers to sell anywhere in the country.

However, the protesting farmers have expressed apprehension that the new laws would pave the way for eliminating the safety cushion of Minimum Support Price and scrap the mandis, leaving them at the mercy of big corporates.

The Centre has repeatedly asserted that these mechanisms will remain.

On Wednesday, agitating farmers demanded that the Centre convene a special session of Parliament and repeal the Farmers' Produce Trade and Commerce (Promotion and Facilitation) Act, 2020; the Farmers (Empowerment and Protection) Agreement on Price Assurance and Farm Services Act, 2020; and the Essential Commodities (Amendment) Act, 2020.