French President Emmanuel Macron lauded the efforts of India, along with other nations, for making International Solar Alliance (ISA) a reality 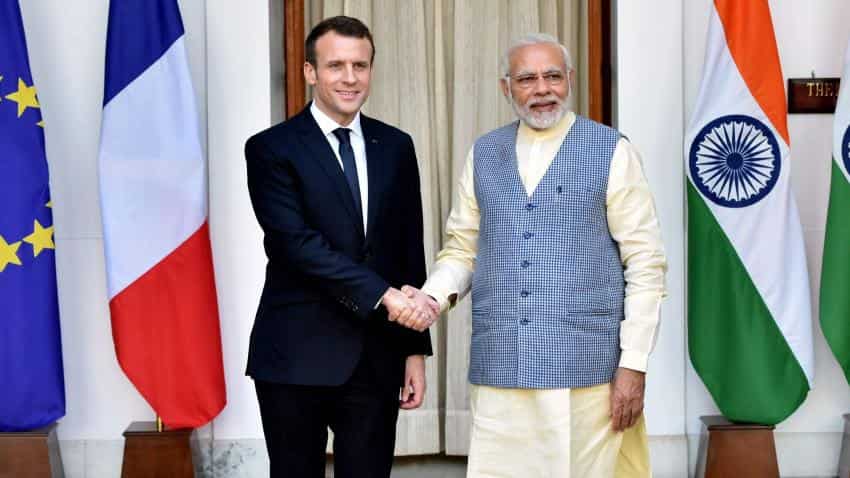 Emmanuel Macron's oblique reference was towards US President Trump's decision to pull out of the Paris climate agreement, which was signed by nearly 200 countries in December 2015. Image source: PTI

Taking a swipe at US President Donald Trump for backing out of Paris climate agreement, French President Emmanuel Macron lauded the efforts of India, along with other nations, for making International Solar Alliance (ISA) a reality. However, Macron did not name Trump at the founding conference of ISA in the capital today. While hailing the 'Solar Mamas', a group of women solar engineers, he also referred to the countries which decided to leave the climate agreement.

Addressing the summit in the presence of Prime Minister Narendra Modi, Macron said, "Mr Prime Minister, You made a dream and we did it. It was about this International Solar Alliance. It was two years ago, it was just an idea at that time and we decided all together to act very quickly and today a big change".
Expressing his immense happiness and lauding the efforts of Solar Mamas, he said, "Our solar mamas did not wait for us. They started to act and to deliver complete results. They did not wait and stop because some countries (US and others) just decided to leave the floor and leave the Paris agreement. Because they (ISA nations) decided it is good for them their children and grandchildren. They decided to act and keep acting".

The oblique reference was towards US President Trump's decision to pull out of the Paris climate agreement, which was signed by nearly 200 countries in December 2015 in an effort to curb global greenhouse gas emission and limit global warming to within 2 degrees Celsius. In November last year, Syria signed the deal, leaving the US as the only country in the world not to support the framework deal to combat greenhouse gas emissions.

Interestingly, France is the co-host for the founding conference of the the ISA which is a treaty based international body with 121 prospective member countries. As many as 60 nations have signed the agreement to join ISA, while 30 have already ratified the agreement and made it possible to make it a legal entity in December last year.

Macron said the countries at the ISA represent three-fourths of the world population. As much as 20-50 per cent of the population do not have access to power. The joint goal is to have 1 TW of solar energy by 2020 for which "we need USD 1,000 billion," he said.
Today, heads of 23 nations and 10 ministerial representatives gathered here for alliance's first summit.