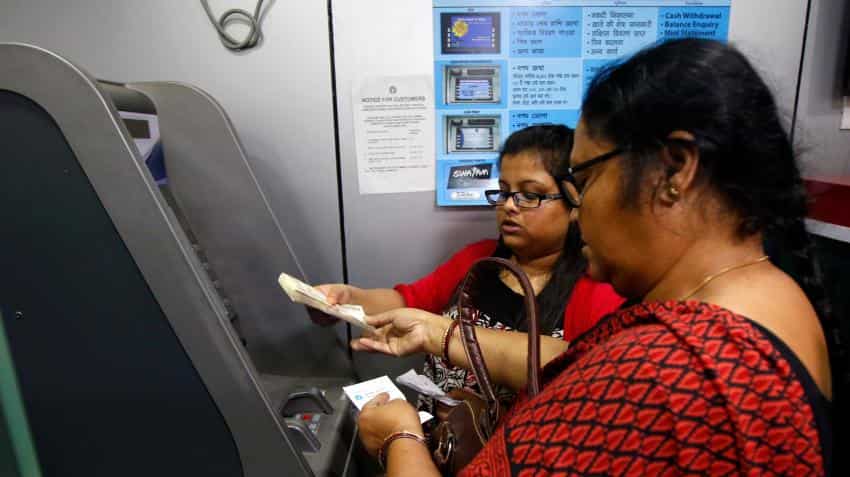 The government, however, is pushing hard for higher penetration of digital banking so that the nation moves towards a cashless economy. Image Source: Reuters
Written By: IANS
RELATED NEWS

With the government nudging people towards digital banking modes -- payments through mobile phones, Point-of-Sale (PoS) machines and others -- ATM players may find their business in a flux in the coming years.

ATMs are cash-vending machines and operators are paid on a per transaction basis.

While some industry insiders see a plateauing of demand for ATMs because of the various other payment modes that will come into play in the near future, others are sanguine about the continued demand for the cash-dispensing machines.

According to V Balasubramanian, President, Financial Software and Systems (FSS), the demand for ATMs is unlikely to be affected in the next couple of years, but "it is not possible to make a growth estimate after two years given the changed situation".

On the other hand, K Srinivas, Managing Director and CEO of BTI Payments, said ATM numbers in India would grow for the next 15 to 20 years.

ALSO READ: Digital payments to rise to a $500 billion ecosystem in India by 2020: Report

As Srinivas pointed out, the US, with a population of around 320 million, has some 432,000 ATMs, while India, with a population four times that has only around 220,000. There are thousands of Indian villages that do not have even one such machine, he added, suggesting huge headroom for growth.

"Even in the most advanced countries, where digital banking is popular, cash transactions still take place. Over a period of time ATM players will also rediscover themselves and offer additional services," Srinivas said.

According to him, the increase in PoS terminals will not pose a major threat to ATM players, while Balasubramanian said one problem with rural areas migrating to mobile payments in large numbers is that not many have smartphones.

The government, however, is pushing hard for higher penetration of digital banking so that the nation moves towards a cashless economy.

According to a report prepared by SBI`s Group Chief Economic Advisor Soumya Kanti Ghosh, there is excess of Rs 5 lakh crore cash in circulation which is "neither required nor desirable" and that a digital economy needs to be encouraged.

According to Ghosh, if the size of digital banking were to increase to Rs 3 lakh crore, there was a need for around 20 million extra PoS terminals.

"Further, we have to ensure that per mobile banking transactions increase from Rs 10,000 (in September 2016) to Rs 25,000 monthly. Mobile wallet transactions need to increase from current level of Rs 32 billion to around Rs 100 billion going forward," the report said.

"This means that value per transaction needs to increase significantly from the current level of a mere Rs 425 to around Rs 1,000," the report added.

According to the report, the government should also look at specifying a certain limit for digital transactions for individuals that could be available for tax deduction.

These may be akin to tax rebates given under section 80C of the Income Tax Act.

The other measures suggested are banning all cash transactions for government services, mandatory installation of PoS machines at merchant outlets and making PAN details mandatory for any cash transaction above a specified limit.