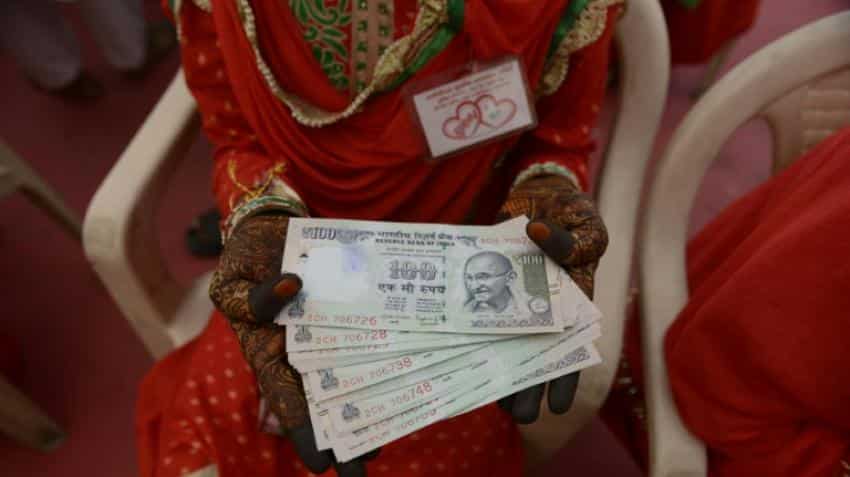 Life savings are ploughed into weddings in India, with a typical urban family spending up to $75,000 on celebrations, according to an estimate by Goldman Sachs. Image Source: AFP
Written By: AFP
RELATED NEWS

Jatin Pal`s wedding was just days away and his family were finalising plans for an extravagant multi-day celebration -- then Indian Prime Minister Narendra Modi banned high denomination notes overnight, casting a dark shadow over the festivities.

The move -- described by the prime minister as a "surgical strike" against corruption and tax evasion -- coincided with the start of India`s annual wedding season, when thousands marry during a three-month period deemed auspicious in the Hindu faith.

"We marry once and you try to make it memorable in every possible way. But the cash crunch is proving otherwise," said Pal. "This has soured the happiness and left a bad feeling."

Life savings are ploughed into weddings in India, with a typical urban family spending up to $75,000 on celebrations, according to an estimate by Goldman Sachs.

Traders say almost all wedding-related purchases are traditionally made in cash from savings put aside over years -- even decades -- but that the currency ban means many families are being forced to cut back.

"Indian parents start planning and saving for the wedding as soon as a child is born," Priyanka Gupta, owner of a bridal store told AFP, adding that she had seen a significant drop in business since the demonetisation.

Delhi-based wedding planner Shrawan Kumar said most of his clients spend between Rs 1.5 million and Rs 2 million, but that some had scaled back plans by as much as 40%. Others have simply decided to postpone or even cancel.

"I can`t pay the waiter, photographer, transport, florist, vegetable seller through cheques. We are at a loss," Kumar said.

Another casualty has been one of Delhi`s oldest gold markets, which has temporarily closed after tax officers raided jewellers across the country on reports of a gold buying spree following the currency ban as people tried to turned their cash into gold.

Almost 50% of gold sales in India are linked to weddings, according to the World Gold Council, with most purchases made in cash.

Stubbornly long queues outside banks have become a ubiquitous sight across the country as the new rupee bills have been slow to get into circulation.

The government has put temporary restrictions on the amount of cash people can exchange or withdraw in an attempt to wean the country off cash and bring more into the formal -- and taxable -- banking sector.

But Pal`s father Ranbir said they had twice tried and failed to get the extra money under the scheme -- which requires paperwork proving a wedding is in the works -- and instead borrowed around Rs 450,000 from friends.

"It is frustrating when you have saved money for the wedding but can`t use it," said Ranbir.

"We should be making arrangements for over 700 guests who will come to the wedding. Look what we are doing."

Short of cash, the family has had to scale back the celebrations.

Madhur Jain, who runs a wedding card shop in old Delhi, said he had received just three orders a week since the demonetisation, down from an average of 30.

"The old notes are out and new notes are nowhere to be seen," Jain told AFP.

But despite most customers paying in cash, bridal shop owner Gupta was quick to dismiss suggestions that so-called "black money" -- unaccounted money -- was involved in the industry.

"There is no black money involved in the weddings," she said.

"More than anything this means shattered dreams of families (hoping) to celebrate an ideal wedding."