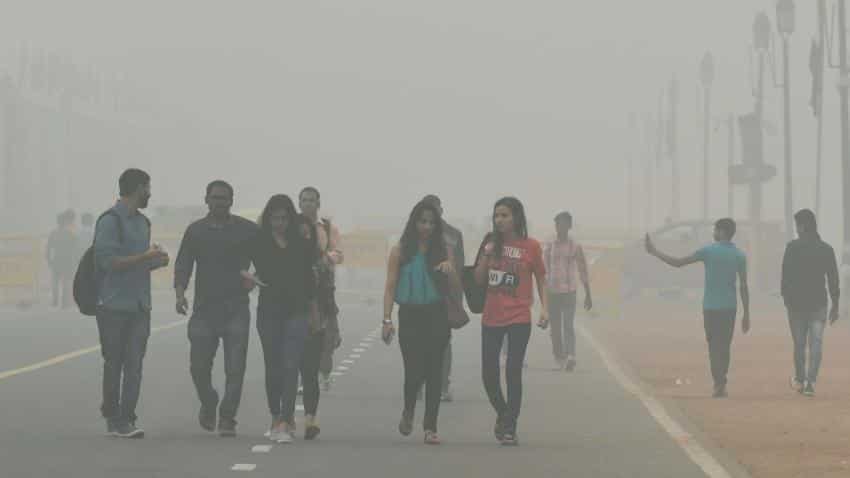 According to Snapdeal, the category has seen an overall three-fold increase in demand this year compared to the same time last year. Image of blanket of smog covering Delhi on November 6, 2016. Image Source: IANS
Written By: PTI
RELATED NEWS

Fighting pollution with air purifiers? How you may still be breathing in poison

Customers are thronging e-commerce platforms such as Snapdeal, Flipkart and Amazon to buy air purifiers and masks to protect themselves from the health-threatening thick cloud of smog that has been enshrouding Delhi since Diwali.

While many people bought these items as a preventive measure before the festival of lights and crackers, there has been a significant rise in sales post Diwali as well.

According to Snapdeal, the category has seen an overall three-fold increase in demand this year compared to the same time last year.

"Between pre-Diwali and post-Diwali, we have already seen a seven-fold increase in the number of air purifiers and masks sold on Snapdeal," it added.

Interestingly, the city-based portal has curated a special store for the category and is expecting a 10-fold surge in orders placed for air purifiers.

Consumers are also opting for air purifiers on the go. Unit sales of car air purifiers in the first five days of November was 140% more than that seen in the month of October for the devices on Snapdeal.

The city's air quality has steadily worsened over the years, a result of pollution from vehicles and industrial emissions.

Apart from atmospheric dust, burning of crop stubble in farms also contributed to the thick cover of hazardous haze that has been shrouding the city for nearly a week.

The air quality have levels of harmful PM 2.5 particles hovering at dangerous levels, something that has been seen in cities like Beijing.

These fine particles less than 2.5 micrometres in diameter are linked to higher rates of chronic bronchitis, lung cancer and heart disease.

E-commerce giant Flipkart, too, has seen a year-on-year growth of 2.5 times in sales in terms of units sold and 2.8 times rise in revenue.

The country's largest e-commerce player said about 50% of the air purifier demand is coming from Delhi, while 71% of the the demand is from the north zone.

Amazon.In has also witnessed three-fold increase in unit sales of air purifiers in October this year (compared to the previous month) and four times increase as against last October.

"About 50% of our orders are coming from customers belonging to cities like Delhi, Gurgaon and Bangalore apart from other metros. With the onset of winters and the growing smog/fog situation in cities during this time of the year, we expect the customer demand for Air Purifiers to peak over the next three months," an Amazon.In spokesperson said.

"The highest number of orders for pollution masks were placed by customers on November 1 this year. The demand continues to be high from northern India with most orders coming from Delhi," the spokesperson said.

The Delhi government had issued a circular to schools in the city to remain closed till November 9 as the government worked on ways to counter the situation.

Companies like Idea Cellular and PayU are also taking steps to protect their employees.

Idea Cellular said it has enabled flexible timing for employees and face masks are being distributed to assist them in reducing their exposure to pollutants in the air.

"Special buses will be plied to pick and drop employees from key locations and car pools are being planned so that vehicular movement is reduced. These facilities have been enabled for this entire week," it added.

PayU India, on the other hand, has declared work from home so that engineering work is not affected.

"As an interim fix, we have also made available free face masks for our employees, to help them avoid the thickly polluted air. We are hopeful that the government would take corrective measures to bring the situation under control, at the soonest," Chetna Gogia, Director-HR at PayU India, said.

Fighting pollution with air purifiers? How you may still be breathing in poison