This time, the India Meteorological Department has said that a fresh western disturbance is likely to increase the wind speed and improve the air quality in Delhi-NCR post Diwali. 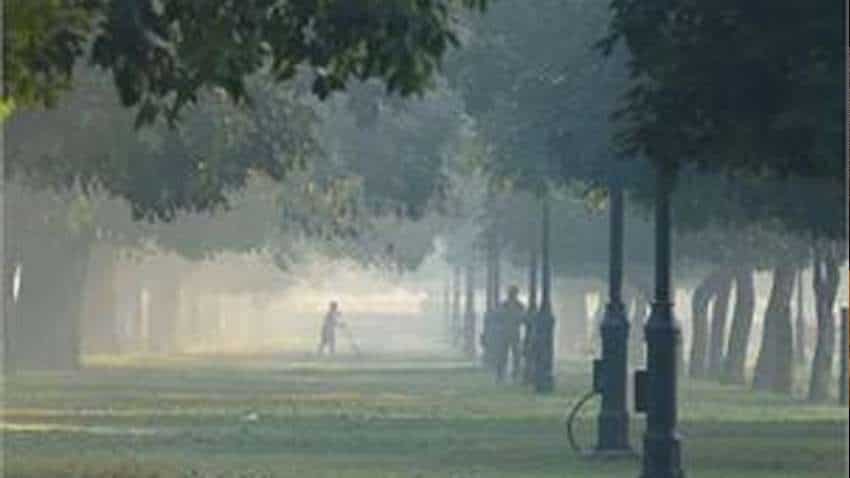 Delhi recorded an AQI of 369 at 9 am on Saturday. PTI pic.
Written By: Prashant Singh
RELATED NEWS

According to government agencies and weather experts, Delhi's air quality remained very poor on Saturday morning and emission from firecrackers and calm winds may push it to the severe zone.  The Ministry of Earth Sciences' air quality monitor, SAFAR, said the PM2.5 concentration in Delhi on Diwali is likely to be the lowest in the last four years if no firecrackers are burnt. Pollution levels in Delhi during the Diwali period are likely to remain in the higher end of the very poor category in the absence of emissions due to fireworks, it said.

But two factors smoke from farm fires and stagnant surface winds will keep the air quality in the higher end of the very poor category to the lower end of the severe on Diwali night, it said. Transport-level winds have become northwesterly and the stubble burning-induced impact on air quality index (AQI) is expected to increase, the central government agency said. A spike in PM2.5 levels in the early hours Sunday is likely if fire crackers are burnt, it said.

This time, the India Meteorological Department has said that a fresh western disturbance is likely to increase the wind speed and improve the air quality in Delhi-NCR post Diwali.

Light rain is likely on Sunday under the influence of a western disturbance. It is still to be seen if it is enough to wash away pollutants, Kuldeep Srivastava, the head of the IMD's regional forecasting centre, said. However, Delhi-NCR's air quality is likely to improve post Diwali due to an increase in the wind speed. On Sunday, the maximum wind speed is expected to be around 12 to 15 kilometre per hour, he said.

V K Soni, the head of the IMD's environment research centre, said calm winds and firecrackers emissions may push the air quality to the severe zone on Diwali night. The wind speed is expected to pick up thereafter and the wind direction will be east-southeasterly, he said. There will be a significant improvement in air quality by November 16, Soni said.

The Commission for Air Quality Management (CAQM) on Friday directed the CPCB and states concerned to ensure there is no lapse in the implementation of the National Green Tribunal's directions in view of the air quality scenario during the Diwali period.

In pursuance of NGT order dated November 9 and considering the concerns of air quality scenario in the NCR and its adverse health impact, the Commission directed CPCB, state governments and authorities concerned for strict compliance of the directions of NGT, with zero tolerance on violation, it said.

The National Green Tribunal (NGT) had on Monday imposed a total ban on sale or use of all kinds of firecrackers in the National Capital Region (NCR) from November 9 midnight to November 30 midnight, saying "celebration by crackers is for happiness and not to celebrate deaths and diseases".

A bench headed by NGT Chairperson Justice Adarsh Kumar Goel clarified that the direction will apply to all cities and towns in the country where the average of ambient air quality during November 2019 was in "poor" and above categories. "At other places, restrictions are optional for the authorities but if there are more stringent measures under orders of the authorities, the same will prevail," the NGT had said.

The Central Pollution Control Board (CPCB) had on Wednesday ordered closure of hot mix plants and stone crushers in Delhi-NCR till November 17 in view of a likely increase in pollution levels during the festive season. It also asked the governments of Punjab and Haryana to take immediate stringent actions to curb stubble burning and authorities in Delhi-NCR to strictly check biomass burning.