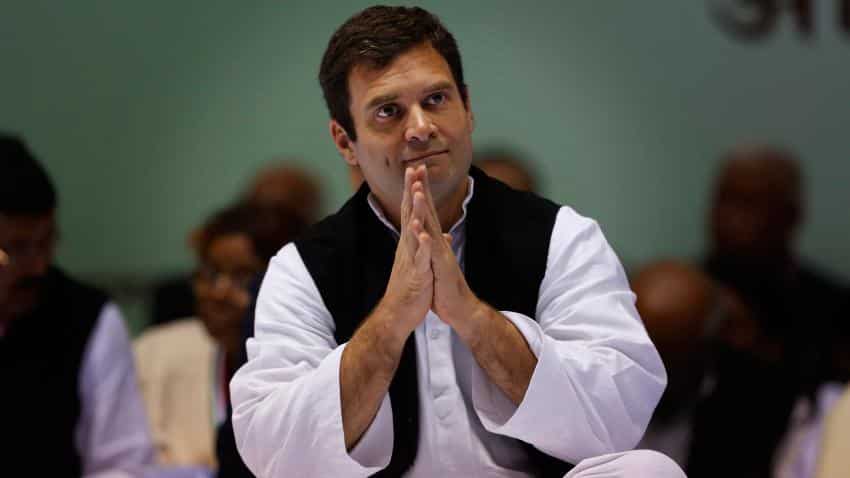 The opposition party said the guilty in bank frauds should be brought to book as no one will invest in the country if questions are raised on its banking system. Image source: PTI
Written By: PTI
RELATED NEWS

The Congress today hit out at the central government after yet another bank fraud involving a Delhi jeweller came to light and demanded that Prime Minister Narendra Modi fix accountability of those involved in such cases within 60 days through a probe conducted by the RBI.

The opposition party said the guilty in bank frauds should be brought to book as no one will invest in the country if questions are raised on its banking system and this will harm the country's growth.

Congress president Rahul Gandhi led the attack on the prime minister alleging that the Delhi-based diamond jeweller involved in the scam "disappeared" like Nirav Modi and Vijay Mallya while the government looked the other way.

He said the promoter of Dwarka Das Seth International, who was booked by the CBI for an alleged fraud of Rs 389.85 crore towards Oriental Bank of Commerce, operated with the same modus operandi of fake LoUs as Nirav Modi.

"Predictably, like Mallya and Nirav, this promoter too has disappeared while the Government looked the other way," he said on Twitter.

Gandhi also raised the issue during his rally in poll-bound Karnataka to attack Modi, asking him to first explain how the money was taken away from the bank under his nose.

Congress leader Kapil Sibal demanded a thorough probe by the RBI into the alleged Rs 11,400-crore PNB fraud and said prime minister should assure the nation that accountability of the finance ministry, the Reserve Bank of India and the management of defaulting banks would be fixed within 60 days.

"Until the prime minister gives an assurance to the country, people will think that administration is supporting those who were indulging in bank frauds. The money defrauded be brought back, guilty be booked, those involved in the conspiracy are dismissed and action be taken against them.

"If questions are raised on the country's economy and banking system, then no investment will come in the country and this will harm the country's growth...We demand that there should be an RBI probe in the matter (PNB scam) at the earliest," Sibal said.

He also sought to know why people like Nirav Modi, who were indulging in banking scam, were "allowed to escape the country".

"Country has faced a loss of around Rs 21,000 crore as of now and other banking frauds will also come out in a few days. Another Rs 390 crore OBC (Oriental Bank of Commerce) scam has also emerged.

"I am surprised that despite our prime minister being the most expensive 'chawkidar' (watchman), why are all these (banking frauds) happening under his nose," Sibal told a press conference here, taking a swipe at Prime Minister Narendra Modi over his refrain during poll rallies that he would act as a watchman for the country,

He said that if questions are raised on banking system, it impacts the country's economy and affects investment as international trade is done through banking system.

"Why is Modiji silent? Modi yesterday said that government will bring back those people who indulged in banking scams. Leave the issue of bringing these people back to country, we want to first know why these people were allowed to flee the country," Sibal said.

Former finance minister P Chidambaram claimed that best decadal growth was under the UPA government between 2004 and 2014, when the GDP in current prices increased three times in dollar terms and four times in rupee terms.

Referring to the alleged 2G scam during the UPA government, Sibal said while it was only 'presumptive loss' alleged in it, the bank frauds are the 'real frauds' as public money has been looted by scamsters.

At the press conference, the party made four demands to Prime Minister Narendra Modi.

"The prime minister should assure that accountability of the finance ministry, of the RBI, and the management of defaulting banks, must be fixed in the next 60 days.

"The Reserve Bank of India must conduct a forensic audit of all swift communications and swift messages matching them with underlying transactions within 60 days and report that to the people of India through a report, which should be made public.

"The prime minister must assure this country, must commit to the people of India that the swift communication system of all banks will be connected to their core banking system in 30 days," he said.

Sibal said every swift message in the past five years, will be checked by the banks, to report if they are supported, by genuine business transactions to expose any other frauds that are yet to be detected. This should also be done in the next 30 days. "We want the prime minister to assure this country."

He also targeted the investigative agencies, sayings they are "no longer caged parrots" and were "singing" the une of the government.