Cabinet formation: PM Modi meets Arun Jaitley over his decision to opt out of new govt

Prime Minister Narendra Modi on Wednesday visited Arun Jaitley at his residence, a move that reflects the importance attached to the senior leader. 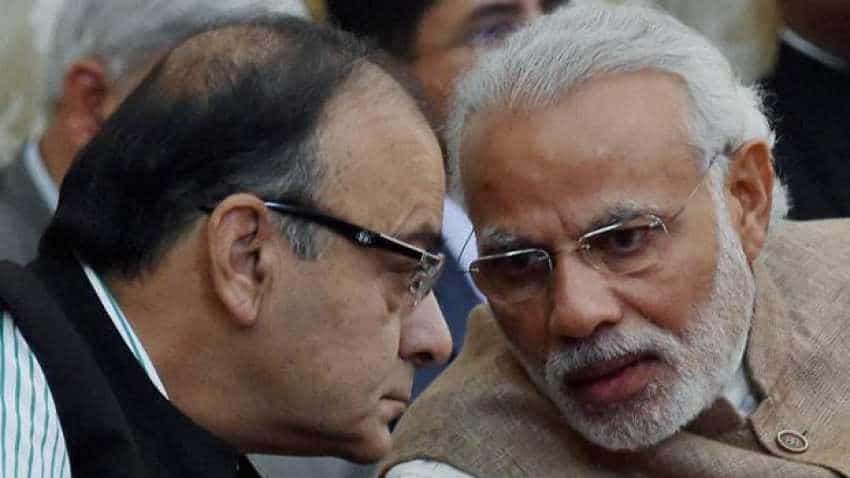 Modi, who along with his new Cabinet are to be sworn-in on Thursday evening, drove to Jaitley's official residence in the national capital. Photo: PTI

Hours after Arun Jaitley announced decision not to seek a ministerial position in Modi 2.0 government due to health reasons, Prime Minister Narendra Modi on Wednesday visited him at his residence, a move that reflects the importance attached to the senior leader.
Though Modi in his first term as Prime Minister had visited Jaitley's residence for 'unofficial' meetings with groups of senior editors, this is perhaps the first time that he visited the residence of a minister for an unscheduled engagement.

Modi, who along with his new Cabinet are to be sworn-in on Thursday evening, drove to Jaitley's official residence in the national capital at 8:50 pm and was with him for close to 25 minutes, officials said. Modi enquired about Jaitley's health and well being, they added.

Specific details about the meeting was not known immediately but the visit was possibly to convey a message that Jaitley is valued, appreciated and wanted by him and his government.

Neither Jaitley, who had tweeted his letter written to Modi requesting that he not be given any responsibility in the new government for health reasons, nor his office immediately commented on the meeting.

Modi and his council of ministers would be sworn in at Rashtrapati Bhawan Thursday evening.

"I am writing to you to formally request you that I should be allowed a reasonable time for myself, my treatment and my health and therefore, not be a part of any responsibility, for the present, in the new government," Jaitley said in his letter to Modi.

Sources said prime minister acknowledged receipt of Jaitley's letter and also appreciated his contribution towards economy and implementation of GST. However, it was not immediately known if Modi acceded to Jaitley's request.

In his letter to Modi, Jaitley said during the last 18 months, he has had "some serious" health challenges and would want to keep away from any responsibility for "sometime" to concentrate on treatment.

"After the campaign had concluded and you were leaving for Kedarnath, I had orally informed you that even though I was able to discharge the responsibilities assigned to me during the campaign, I would in future, for sometime, like to keep away from any responsibility. This will enable me to concentrate on my treatment and health," he wrote.
A lawyer by profession, he has been the most important leader in Modi's Cabinet and has often acted as the chief troubleshooter for the government.

As finance minister, Jaitley steered through Parliament major economic legislations such as the Goods and Services Tax (GST), which had languished for nearly two decades.

Jaitley, 66, has also played key role in getting through several other laws such as the bill to ban the Muslim instant divorce practice known as 'triple talaq' and also articulately defended the Rafale fighter jet deal.

Last week, he was admitted to AIIMS last week to undergo tests and treatment for an undisclosed illness and was discharged on Thursday - the day results of Lok Sabha elections were announced.

He did not attend celebrations at BJP headquarters that evening after the party's emphatic victory. BJP won a landslide 303 seats, of the 542 seats, in the general elections.

Jaitley underwent a surgery in the US on January 22 for a reported soft tissue cancer in his left leg, an illness that deprived him from presenting the Modi government's sixth and final budget of its current term.

Railway and Coal Minister Piyush Goyal was the stand-in finance minister who presented the interim budget for 2019-20.