Maharashtra Navnirman Sena strongly opposed the decision to import sugar from Pakistan for sale in India, with its activists going around to warn traders against selling it in the market. 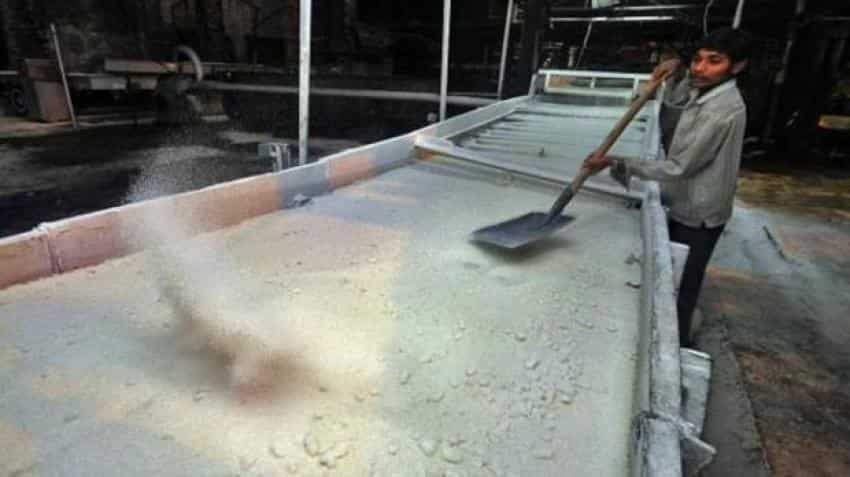 The government imported Pakistani sugar which costs Re 1 less per kg than rates prevailing in India. Image source: PTI

NCP activists led by a party MLA ransacked here on Monday a warehouse that stored sugar imported from Pakistan, an issue that also elicited strong reaction from the Maharashtra Navnirman Sena and a dig at the Centre from the Congress. Nationalist Congress Party (NCP) workers led by senior leader and legislator Jitendra Awhad staged protests against a businessmen who had stockpiled sugar from Pakistan in a warehouse in Diaghar in Thane. They also damaged some sacks and threw sugar on the floor.

Maharashtra Navnirman Sena also strongly opposed the decision to import sugar from Pakistan for sale in India, with its activists going around to warn traders against selling it in the market.

"We have asked them to be prepared for retaliation in `MNS-style` if they continue to sell Pakistani sugar to customers," said MNS leader Sandeep Deshpande.

"The Shiv Sena does not tolerate Pakistani artistes and players, but Pakistani sugar is fine with them. Despite there being a record production in India, the government has imported huge quantity of sugar from Pakistan, which will severely hit the Indian sugar industry," Chavan told mediapersons.

He said that against government estimates of 250 metric tonnes of sugar production, the output has been 320 metric tonnes while sugar from previous season lies unsold in godowns, resulting in a crash in prices from around Rs 42 per kg last year to Rs 25 per kg this year.

"Sugar production is expected to increase even next year. So, the government should formulate a proper sugar policy and encourage exports, create a buffer stock of five million tonnes, provide for interest payments, storage, insurance and maintenance costs, etc," Chavan said.

However, he said, the government imported Pakistani sugar which costs Re 1 less per kg than rates prevailing in India, which will result in further drop in sugar production, hitting growers and factories alike.

Former Minister Harshavardhan Patil said that by this decision, the Modi government has shown more concern about Pakistani farmers than Indian farmers who are reeling under agrarian crises.

"The government has imported 20,000 tonnes of sugar from Pakistan. This is a conspiracy to crash sugar prices in the country. There should be a high-level inquiry," Patil said.

Maharashtra Marketing Minister Subhash Deshmukh said that the state is examining as to how cane growers can be helped in the current situation.

"Recently, the central government announced a subsidy of Rs 55 per quintal on sugar, which is ultimately benefiting farmers. We will explore other ways to address the genuine issues faced by sugarcane farmers and the sugar industry," Deshmukh said.