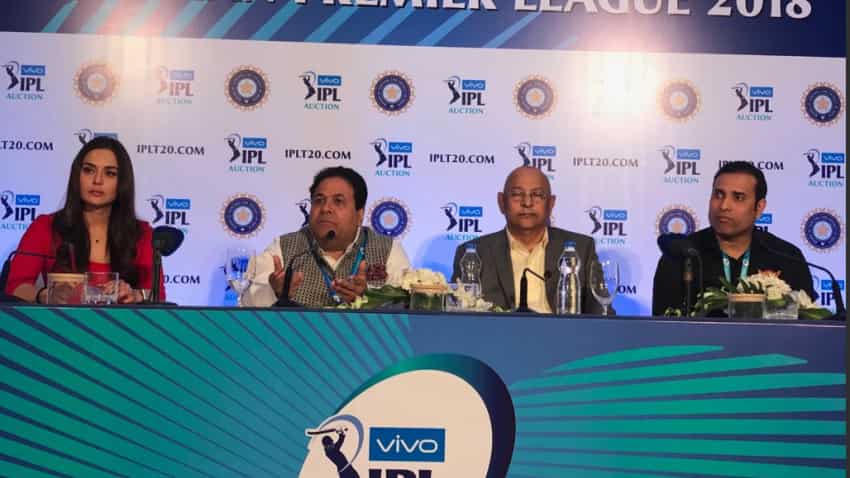 Chennai Super Kings roped in Harbhajan Singh at his base price of Rs 2 crore. Image source: twitter
Written By: PTI

Indian players dominated the bidding wars as KL Rahul and Manish Pandey laughed their way to the bank with multi-million dollar deals but England all- rounder Ben Stokes once again emerged the costliest buy in the IPL auctions, here today.

Despite all the off-field controversies, Stokes was snapped up for a whopping Rs 12.5 crore (USD 1.96 million) by Rajasthan Royals after Kings XI Punjab, Chennai Super Kings also engaged in a fierce bidding war.

The franchises were smart in their choices with most of the current India players attracting significant interest. Stylish opener Rahul and middle-order batsman Pandey bagged deals worth Rs 11 crore (USD 1.73 million) from Kings XI Punjab and Sunrisers Hyderabad respectively.

With their prices sky-rocketing, the two players' original franchises RCB and KKR didn't use their Right To Match (RTM) cards.

The Karnataka players had a field day at the auctions with India discard Karun Nair also triggering a bidding war before Kings XI Punjab got him for Rs 5.60 crore.

Kedar Jadhav, one of Mahendra Singh Dhoni 'Go To Man' during his last stint as India captain, also fetched a healthy price of Rs 7.80 crore for his all-round qualities of batting, round-arm off-spin and back-up wicket-keeping. He was snapped by the Dhoni-led Chennai Super Kings.

Chennai, however, didn't bid vigorously for Ravichandran Ashwin, who will now ply his trade for Kings XI Punjab at a salary of Rs 7.60 crore.

Interestingly, Chennai Super Kings roped in Harbhajan Singh at his base price of Rs 2 crore (USD 315,000).

But none came close to Stokes, who has been struck with controversies of late and was dropped from the England Ashes squad following a pub brawl. He has even been charged in the matter now.

Stokes was bought for Rs 14.5 crore (USD 2.28 million) by Rising Pune Supergiants during the last auctions, and proved to be a worthy buy with his all-round performance taking the team to the final.

There were multiple bids from Kings XI Punjab, Chennai Super Kings but Steve Smith, Stokes' captain at the Pune franchise, wanted him desperately and thus his owners respected his wish.

"As far as we are concerned the ECB has cleared him for auction. We are prepared for legal consequences too. He will be a very important part of the team. We are like a start-up company. We are restarting, we needed an all-rounder and hence we picked up Stokes," Royals executive chairman Ranjit Borthakur said.

Another predictable aspect was Australian players getting premium bids with Mitchell Starc being picked by Kolkata Knight Riders for Rs 9.60 crore (USD 1.5 million).

At the end of Day 1 at VIVO #IPLAuction, this how the team's are placed in terms of their purse and composition. pic.twitter.com/VUpHTTl2uW

The other big buy among the 16 marquee players was Glenn Maxwell, who was back in the Delhi Daredevils fold after five years for a record Rs 9.40 crore after intense bidding. DD had the last laugh when KXIP refused to use their RTM card.

"It is keeping in mind conditions in Kolkata. The playing conditions and wicket has changed quite drastically. So if you see the two retentions which we have had -- Sunil Narine and Andre Russel -- and now you add Mitchell Starc to that, I think that makes a good bunch of bowlers who can bat," KKR CEO Venky Mysore explained.

Daredevils, however, got their probable captain in Gautam Gambhir at a dirt cheap rate. Similarly, another veteran Yuvraj Singh got an opening bid from Kings XI Punjab for Rs 2 crore.

Dwayne Bravo was taken for Rs 6.40 crore by CSK using the RTM card.

Kieron Pollard was predictably bought by Mumbai Indians, who used their Right To Match (RTM) card for Rs 5.40 crore (USD 850,000), while Sunrisers Hyderabad bought back Shikhar Dhawan for Rs 5.2 crore (USD 817,000) after heavy bidding from KXIP.

Kane Williamson was back at Sunrisers Hyderabad for Rs 3 crore (USD 472,000).

"Not at all surprised at Gayle being dropped, RCB?s problem is stock heavy and they will use RTM card for KL Rahul as opening batsman and (Yuzvendra) Chahal, they are Indian cricketers and know the conditions well," Srikkanth said.

On Ashwin, he said:"I expected it, reason is that last year Washington Sundar played under (MS) Dhoni and Steve Smith for (Rising) Pune (Supergiant), and he was the most economical bowler. Now he is a T20 bowler for India, because they have an option in Washington Sunder."