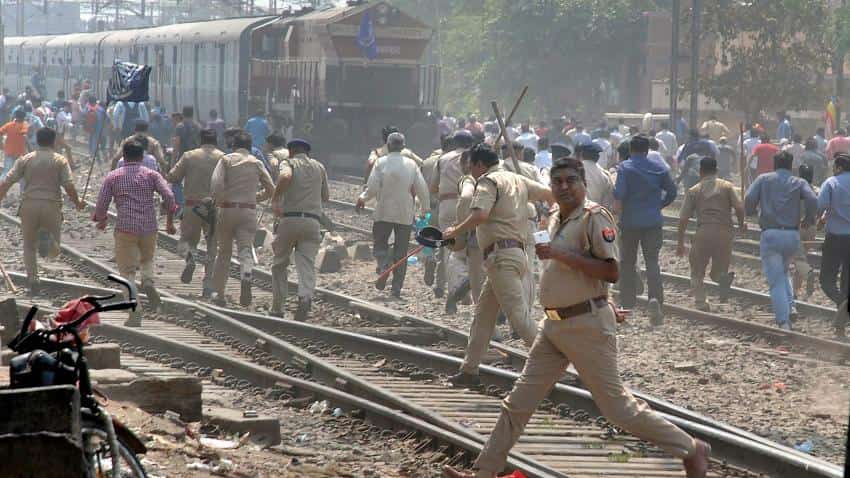 Bharat bandh: More than 100 Indian Railways passenger and mail train services were affected today as protesters squatted on the tracks to enforce an all-India shutdown against the dilution of the SC/ST Act, officials said, adding that the routes were largely restored. The protesters blocked rail and road traffic and resorted to violence in Rajasthan, Odisha, Bihar, Uttar Pradesh, Haryana and Delhi. The Indian Railways said across its zones, the protesters started gathering at the rail yards since early morning. The services were disrupted when a mob arrived at the Ghaziabad yard around 10 am, Northern Railway officials said.

Many trains, including the Saptakranti Express, Utkal Express, Gatiman Express, the Bhubaneswar and Ranchi Rajdhani and the Kanpur Shatabdi, were stopped ahead of Ghaziabad at Meerut and Modinagar, Northern Railway officials said. A mob of about 2,000 people disrupted the train services at the Hapur station as well, they added. In the Agra Division, around 28 trains were delayed, including a Shatabdi and the Gatiman Express. At the Ferozpur yard, a mob of about 150 people arrived at 8:30 am, resulting in disruption in the movement of trains. Another mob of around 200 people disrupted the services in the Amritsar-Ludhiana section. The routes, officials said, were cleared of the protesters and the trains resumed their journey after a brief delay.

Around 43 trains were affected in the East Central Railways (ECR) because of the protests, which started as early as 5:10 am in the Dhanbad division. In Bihar, the protesters stormed the Patna Junction railway station, forcibly closed down the ticket booking counters and squatted on the tracks. In the East Coast Railway (ECoR), around four train services were disrupted, with the protesters squatting in the Sambalpur and Khurda Road divisions as early as 5:15 am.

Across the North Eastern Railway (NER), South Eastern Railway (SER) and Northeast Frontier Railway (NFR), around 18 train services were disrupted. The trains resumed their journey after 9:30 am. Several Dalit organisations have called for a "Bharat bandh" today to express their concerns over the dilution of the Scheduled Castes and the Scheduled Tribes (Prevention of Atrocities) Act.

The Supreme Court had, on March 20, diluted the provisions of the Act and said government servants should not be arrested without prior sanction and private citizens, too, should be arrested only after an inquiry under the law.
Dalit organisations, including the Dalit Shoshan Mukti Manch, and some political parties fear that the dilution of the provisions of the Act may lead to increase in violence against Dalits.