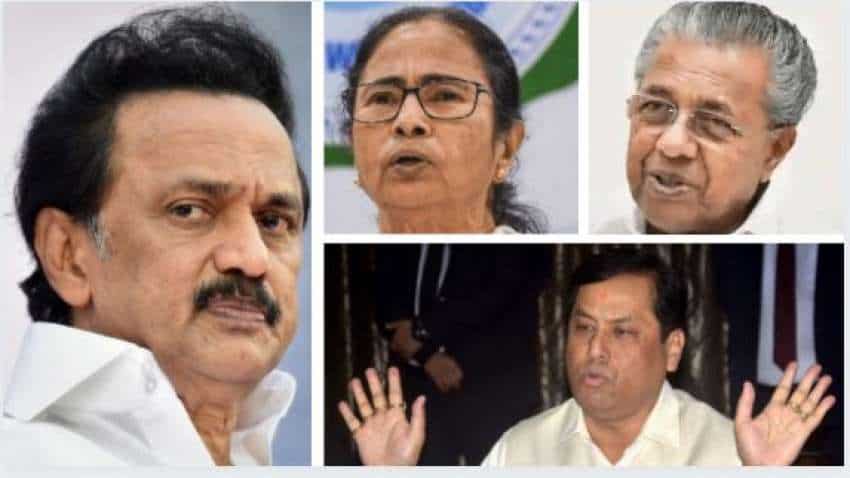 Meanwhile, Prime Minister Narendra Modi congratulated leaders of these parties for winning mandate in these state assembly elections. He posted on Twitter. "Congratulations to Thiru MK Stalin and Pinarayi Vijayan for winning Tamil Nadu and Kerala Assembly elections. We shall work together for enhancing national progress, fulfilling regional aspirations, and defeating the COVID-19 pandemic."

In Tamil Nadu, DMK was set to make massive comeback against AIADMK, while Pinarayi Vijayan led LDF government is set to retain power in Kerala. This is the assessed situation ahead of the results announcement.

11:00 PM: Mamata Banerjee will stake a claim to form the government in the state at 7 AM on Monday, said West Bengal governor Jagdeep Dhankhar. Taking to Twitter, Dhankhar congratulated Mamata Banerjee’s party for win in the West Bengal assembly elections. He informed the chief minister will be calling on him at Raj Bhawan at 7 PM on Monday. In another incident, BJP leader Suvendu Adhikari was allegedly attacked by unidentified assailants in Haldia district while he was coming out from a counting centre in West Bengal, reported Zee News.

8:40 PM: Nandigram controversy refuses to die. Now, three-member Trinamool Congress delegation will meet Chief Electoral Officer at EC Office in Kolkata, seeking a recount of votes in Nandigram and over other issues

Congratulations to Mamata Didi for @AITCofficial's win in West Bengal. The Centre will continue to extend all possible support to the West Bengal Government to fulfil people’s aspirations and also to overcome the COVID-19 pandemic. @MamataOfficial

I’m happy to congratulate Mamata ji and the people of West Bengal for soundly defeating the BJP.

The counting process for Nandigram has not been completed. Please do not speculate: Trinamool Congress (TMC) pic.twitter.com/3ODvzC2Oaw

Bharatiya Janata Party will form the government and the CM will also be from BJP, to continue development in the State: Assam Minister and BJP leader Himanta Biswa Sarma pic.twitter.com/P4ZhpG7mTK

6:30 PM: After initial reports claimed that Mamata Banerjee won Nadigram by 1200 seats, it turned out West Bengal Chief Minister lost to  Suvendu Adhikari by 1736  votes, as per Zee News report.

Don't worry about Nandigram, I struggled for Nandigram because I fought a movement. It's ok. Let the Nandigram people give whatever verdict they want, I accept that. I don't mind. We won more than 221 seats & BJP has lost the election: West Bengal CM Mamata Banerjee pic.twitter.com/jmp098PF2A

Kerala has given a verdict in favor of the LDF. But this is not the time to celebrate with great joy as COVID19 continues to spread. This is the time to continue the fight against COVID19: Kerala CM Pinarayi Vijayan pic.twitter.com/1MKRh2JFZ1

Congratulations to the Chief Minister of West Bengal, Mamata Banerjee Didi on her party’s victory in West Bengal assembly elections. My best wishes to her for her next tenure: Defence Minister and BJP leader Rajnath Singh

4: 20 PM: Mamata Banerjee has sent out a clear message -- that Modi Ji and Amit Shah Ji are not invincible. They can also be defeated, says Shiv Sena MP Sanjay Raut

3: 40 PM BJP candidate from Nandigram, Suvendu Adhikari leads by 6 votes after the 16th round of counting

1: 50 PM: TMC, DMK and LDF clear head of their closest rivals with leads on 205 seats , 136 consttuencies, and 69 assembly seats respectively.

1:42 PM: On Kerala success, CPIM leader Prakash Karat says this is a significant victory by LDF given no government has been re-elected for 2nd successive term in past 40 years

1: 30 PM  "I was always telling that Mamata Banerjee will be CM for the 3rd time. BJP tried their best to crack but they didn't succeed. The Left has now vanished from West Bengal due to their wrong policy of taking a communal force against a communal force." says Firhad Hakim, TMC, on TMC looking to retain power with two-third majority

#WATCH | DMK supporters continue to celebrate outside party headquarters in Chennai as official trends show the party leading on 118 seats so far.

Election Commission of India has banned any victory procession amid the #COVID19 situation in the country.#TamilNaduElections2021 pic.twitter.com/z6Fp5YRnKP

As per the trends, it is clear that Bharatiya Janata Party will form the government in Assam: Assam CM Sarbananda Sonowal#Assam pic.twitter.com/EuxHnucmtD

10:45 AM: Too early to say anything because there are so many rounds. Situation will be clear only by evening. We had started from 3 & were challenged that we won't get even 100, we have crossed that mark. We will cross the magic number too: Kailash Vijayvargiya, BJP

10:05 AM: Chief Minister Mamata Banerjee is trailing in Nandigram by over 3,000 votes from Suvendu Adhikari,  who holds good command over most areas of Nandigram.

9:15 AM: In Kerala, CM Pinarayi Vijayan is leading from Dharmadam seat in Kannur district.

Kerala: Counting of votes for the #AssemblyElections2021 to the 4 states and 1 union territory has begun. Visuals from Idukki where counting of postal ballots is underway. pic.twitter.com/sa79GEqKPY

8:25 AM: BJP leading on some North Bengal seats. TMC leads on 12 seats, BJP on 10 seats as per early trends, while BJP and Congress each leading on 3 seats in Assam

West Bengal: Officials, counting agents and others arrive at a counting centre at Siliguri College in Siliguri. Counting of votes for #AssemblyElections2021 to begin shortly. pic.twitter.com/RaZQKf2Ebo

7: 54 AM: In Assam, the BJP looks ahead in the exit polls and the saffron party win for second consecutive time. All major pollsters have predicted a majority for the National Democratic Alliance (NDA) in the 126-member Assembly.

7: 42 AM: In West Bengal, while Mamata Banerjee`s Trinamool Congress is seeking to seize power for the third consecutive term, the BJP claims of winning 200 seats in the 294-member West Bengal Assembly.

Counting of votes for #AssamAssemblyPolls to be held at two locations in Dibrugarh, at Dibrugarh Govt Boys Higher Secondary School and Deputy Commissioner Office, Dibrugarh.

Visuals from both locations as counting to begin at 8 am.#AssemblyElections2021 pic.twitter.com/UXX0CNAtBp

7: 25 AM: The counting of votes will begin at 8 AM and a final picture is expected to be clear only by evening.

7: 20 AM: There will be 2,364 counting halls as compared to 1,002 halls in 2016 in 822 assembly constituencies in view of the coronavirus guidelines, according to the Election Commission

7:12 AM: The counting of votes will begin at 8 AM and continue late into the night. As many as 1,100 counting observers will watch the process and candidates and agents will have to produce a negative COVID test report or double dose of vaccination certificate to get an entry.