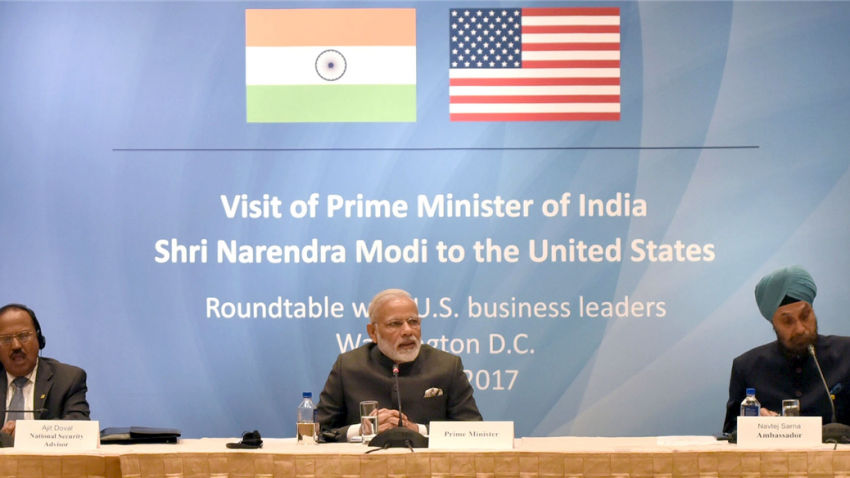 From Moscow to Tokyo, Beijing to Paris and Islamabad to Kabul, all eyes will be on Washington on Monday when Prime Minister Narendra Modi holds his first meeting with US President Donald Trump.

"Look forward to welcoming India`s PM Modi to @WhiteHouse on Monday. Important strategic issues to discuss with a true friend!" Trump tweeted on Saturday ahead of Modi`s arrival from Portugal on the second-leg of his three-nation tour that will also take him to the Netherlands.

Talks between Modi and Trump in what would be their first face-to-face meeting would focus on ongoing cooperation, including counter-terrorism and defence partnership in the Indo-Pacific region, besides trade and law enforcement, White House Press Secretary Sean Spicer has said.

This is Modi`s fifth visit to the US as Prime Minister. While the highlight of his first visit in 2014 was his rock-star like interaction with the Indian diaspora at Madison Square Garden in New York, his second visit saw him interacting with head honchos of top IT companies in California.

Modi again visited the US in March last year for the Nuclear Security Summit and followed this up by a bilateral visit at the invitation of then President Barack Obama. The Prime Minister addressed a joint sitting of the US Congress to much acclaim.

However, Monday`s meeting comes under the shadow of Trump`s efforts for stricter norms for issuance of H1-B visas, a key issue for Indian IT companies operating in the US, and Washington pulling out of the Paris climate agreement on which both Modi and Obama worked hard.

As for the H1-B visa issue, External Affairs Minister Sushma Swaraj has said that despite all the hue and cry about it, there has been no visible effect in the process.

This apart, the issue of what are being seen as racial attacks on Indians in the US will also be something observers will see if comes up for discussion.

India-US bilateral trade, which stands somewhere around $115 billion, technology partnerships, defence cooperation and key Indian flagship development programmes are also expected to figure in the talks. It will be interesting to see how "Make in India" of Modi and "Make in America" of Trump will be taken into consideration.

On multilateral issues, terrorism will come up for discussion as New Delhi and Washington have been strong partners in the fight against this menace. Pakistan`s role in supporting and financing terrorism in Kashmir and the India-Iran-US trilateral meetings on bringing peace and stability in Afghanistan will be points of major focus.

With the current crisis in the Gulf where a number of countries led by Saudi Arabia have cut off diplomatic ties with Qatar for allegedly supporting terrorism, the issue is expected to be discussed in detail. The Gulf is a key partner in India`s energy security with Qatar being the largest supplier of LNG. Also, with the region being home to around eight million expatriate Indians, New Delhi will be keen to know Washington`s position in the current crisis.

Given China`s growing influence across different parts of the world, Beijing`s One Belt One Road (OBOR) initiative is also expected come up for discussion. India has been opposing the OBOR on the ground that it compromises the territorial integrity of the countries it cover. A case in point is the China Pakistan Economic Corridor (CPEC), a key part of OBOR, that passes through Pakistan-occupied Kashmir.

Modi and Trump have spoken to each other thrice over phone since the latter assumed power in January this year. Monday`s first meeting between the two will set the tone for India-US ties in the 21st century.