One user criticised the "very very poor app establishment", citing the inability to generate a PIN using the Maestro debit card. Asking the authorities to "please look into the matter at the earliest", he contended that some 30-40 per cent of account holders have debit cards without expiry dates. 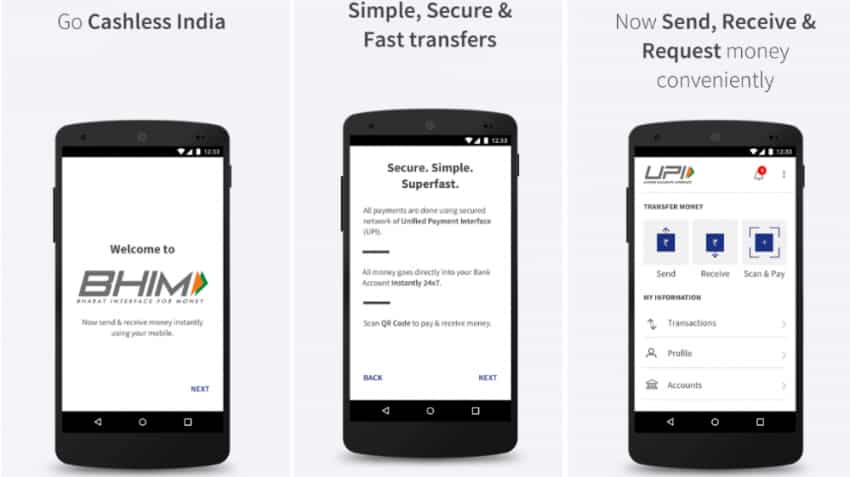 With over five million BHIM apps having been downloaded, users are facing several "teething problems" that need to rectified. However, experts believe what is really required is an "awareness drive" to help the masses use the app.

Launched on December 30, the Unified Payments Interface (UPI)-based BHIM, an acronym for Bharat Interface for Money, is currently available only on Google`s Play Store (it is yet to make an appearance on the Apple iOS platform) -- and users have been registering their complaints there.

A common complaint is about the app not being able to generate a mobile PIN for debit cards that do not have expiry dates.

One user criticised the "very very poor app establishment", citing the inability to generate a PIN using the Maestro debit card. Asking the authorities to "please look into the matter at the earliest", he contended that some 30-40 per cent of account holders have debit cards without expiry dates.

Another, an account-holder with State Bank of India, lamented that the condition of his ATM card -- which does not have an expiry date -- was "very good" and that he would have to pay Rs 500 to get it changed to new one.

There also appear to be "certain server-side bandwidth issues", say experts, which have caused problems such as the Virtual Payment Address (VPA) not being identified, leading to some failed transactions.

Overall, however, the experts described the glitches as "initial teething problems" that would get addressed with time.

"We have to dwell deeper into the nature of complaints to assess the exact reason of their occurrences. As people are increasingly using digital transactions, we must bear in mind that users need to be informed about being intelligent in their usage," Thomas George, Senior Vice President and Head of CyberMedia Research (CMR), a Gurgaon-based market research firm, told IANS.

"When they initiate transactions, the business loses control of a large portion of the transaction interaction as customers use a variety of devices, operating systems and browsers to access the app or e-commerce sites.

"The (problems) could be from any of these, or outside these too. These complaints are initial teething ones and they will get addressed," George added.

According to Saket Modi, CEO & Co-founder, Lucideus -- the IT risk assessment and digital security services provider behind the security for BHIM -- the architecture in which the app works is a complex one where you are doing inter-bank transactions in real-time with an intermediary -- the National Payments Corporation of India -- and a simple application sitting on your mobile phone.

"As you can see, there are multiple parties involved in doing the actual transaction. There are certain server-side bandwidth issues which result in problems such as Virtual Payment Address (VPA) not being identified or some failed transactions," Modi told IANS.

However, Modi too said these were "one-time problems" and would be sorted out soon.

For a successful BHIM transaction, two PINS are required. One is the app PIN which is stored locally on the phone and is required every time a person starts BHIM. The other is the UPI PIN with which you set up an UPI account or a VPA, which is required only when a transaction is taking place or you request to see your account balance on the BHIM app.

"The app has a three-factor authentication, hence is superior both from a technology standpoint as well as a convenience perspective in comparison to mobile wallets," Modi noted.

The binding of the BHIM app with a user`s device ID and mobile number has never happened in any other conventional net banking or mobile wallet apps.

"So it is safe to say that BHIM app is by far the most innovative technology in terms of digital payments. The authentication mechanism is tightly secured yet convenient and I am sure will be replicated globally," Modi told IANS.

According to George, in the coming days, UPI-based apps could displace the cash-on-delivery (COD) payment method in e-commerce -- currently accounting for close to 60 per cent of all transactions.

This will be a major boon for companies like Amazon, Flipkart and Snapdeal which currently incur huge costs on logistics and working capital because of the prevalence of COD and related problems.

"Having said all that, a lot more awareness... an education drive needs to be carried out to really connect UPI with the masses," George emphasised.

According to Pavel Naiya, Senior Research Analyst (Devices and Analytics) at New Delhi-based Counterpoint Research, there are people who have had complaints regarding failed UPI-based transactions, but this was rare.

"Many of these problems may have occurred owing to a wrong UPI PIN entered or an off-base payment address entered. In some cases, this may have happened due to less than required mobile memory left for app to function correctly," Naiya told IANS.

As the chorus grows for people to adapt to digital payment methods in the post-demonetisation era, their success will depend not only on technology and bandwidth -- but on users who are well-informed and aware.