BJP's 'Chanakya' Amit Shah blazed such a trail that the 'Modi Wave 2.0' surpassed its own original avatar with a much bigger saffron surge. 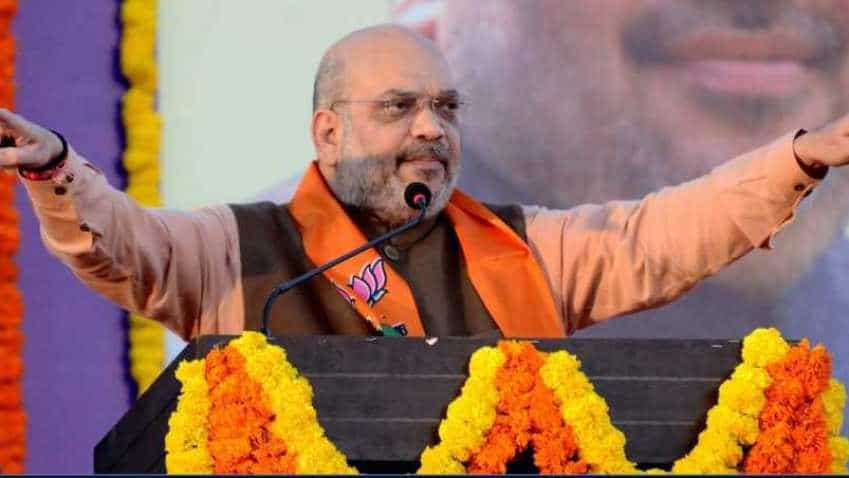 Amit Shah is often hailed as the BJP's most successful president for crafting its way to power states after states. Image source: PTI

He combined BJP's core Hindutva plank with a hardcore nationalism agenda and set up a huge ground-level organisational setup to execute it -- the BJP's 'Chanakya' Amit Shah blazed such a trail that the 'Modi Wave 2.0' surpassed its own original avatar with a much bigger saffron surge.

Known as an astute strategist whose non-political interests range from playing chess and watching cricket to stage performances and listening to classical music, 54-year-old Shah is often hailed as the BJP's most successful president for crafting its way to power states after states.

The record tally that he has now delivered for the BJP in the Lok Sabha 2019 elections is already being seen by many as something that would be difficult to repeat, though there are others who believe there is more to come as they point towards further inroads to be made in West Bengal, Odisha and in down South.

A man with avowed aim of having the BJP rule from "panchayat to Parliament", Shah has built his party into a formidable army that has been forever marching on since he took charge as its president in July 2014, turning India more saffron than it has ever been.

Political pundits say Shah has used a skilful mix of ideological firmness, unlimited political imagination and realpolitik flexibility to keep the BJP ahead of the game. He ceded space in states like Bihar and Maharashtra to put allies at ease, worked on rival politicians with captive local vote banks to get them into the BJP fold, and sewed up new alliances as in Tamil Nadu and in the North East to boost his party's winning prospects.

And, unlike in the 90s when the BJP first came to power at the Centre, Shah ensured that his party made new friends without inviting the charge from its core voter base of diluting its core principles, ranging from Ram temple to cow, nationalism and Kashmir, for political gains.

If under Atal Bihari Vajpayee and L K Advani, the saffron party was seen as being inhibited in going all-out with its Hindutva plank for fear of antagonising allies and due to its perceived limited electoral appeal, the BJP has worn its Hindutva ideology on sleeve like a badge of honour under Prime Minister

Narendra Modi and Shah.
Shah has been of a firm view that Hindutva combined with the BJP's hardcore nationalism agenda, though panned as shrill and divisive by its critics, render the party a distinct identity, and is a winning electoral strategy.  He has always believed that the allies would keep coming as long as the party is delivering in the polls.

Shah is also known to always match his limitless political ambition with a thorough spadework, and then takes charge at the ground to put it into work. When it emerged in 2015 that the BJP with its small allies was no match to the joint forces of Lalu Prasad and Nitish Kumar in Bihar, the party worked at winning over the JD(U) president, who finally broke his short alliance with Prasad in 2017 and joined hands with the former ally.

And when reports of disquiet within the JD(U) emerged with the alliance, Shah met Kumar and announced that both parties will contest equal number of Lok Sabha seats in Bihar, virtually conceding the senior status to the regional party within the state. In Maharashtra, where Shah had let ally Shiv Sena walk out of the alliance in the 2015 assembly polls so that the BJP can consolidate its position there, he offered a generous seat-sharing deal to the Hindutva ally for the all-important Lok Sabha polls.

In Uttar Pradesh with Yogi Adityanath at helm as chief minister, Shah combined the Hindutva agenda with the Modi government's development plank to woo backward castes and bolster its traditional base of upper castes to take on a formidable SP-BSP combine. Having risen through the ranks since starting at the booth level for the party in Gujarat at the age of 14 years, Shah is a firm believer in the prerequisite of a strong ground-level organisational machinery for poll successes.

In state after state, he has put in place a robust organisational machinery for publicising the government schemes, carrying out political programmes and making full use of social media to reach out to voters. For the 2019 elections, he deployed over 7,000 leaders for nearly 500 poll committee across the country, with special focus on 120 seats that the BJP had lost in 2014, and brought in 3,000 "full-timers" across parliamentary seats.

Seen as a Modi confidante, Shah also brought about a cohesion between the government and the party, with the party leaders promoting the government's work and the ministers being used for the party work. Leading from the front, Shah held over 161 rallies and visited over 312 Lok Sabha seats, clocking over 1.58 lakh km, more than any other leader.

After being given charge of the party, he was seen as Modi's hand-picked man to usher in changes to make it more attuned to the prime minister's vision. He did so, including by easing out veterans like L K Advani and Murli Manohar Joshi, cultivating a new band of younger leaders and by keeping the party firmly under his grip.

By all accounts, Shah has become to Modi what Advani was to Vajpayee, and may have crafted a success much bigger than that of the original Hindutva mascot. Just a few months back, Shah said the BJP will remain in power for 50 years if it wins the 2019 elections. With the 2019 done and dusted, he can be trusted to work at the "50-year" saffron rule in India.