Himachal Pradesh Chief Minister Jai Ram Thakur focussed more on the rural population, which constitutes 80 per cent of the state, while presenting a Rs 44,388 crore 'populist' budget for the financial year 2019-20 in the state assembly Saturday. 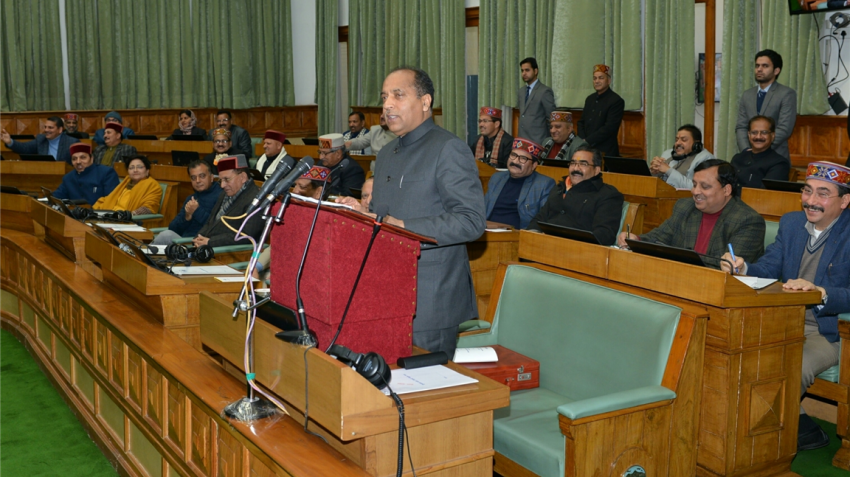 Himachal Pradesh Chief Minister Jai Ram Thakur focussed more on the rural population, which constitutes 80 per cent of the state, while presenting a Rs 44,388 crore 'populist' budget for the financial year 2019-20 in the state assembly Saturday.  No new tax has been proposed in the budget which saw an increase of Rs 2,948 crore (7 per cent) from Rs 41,440 crore in 2018-19.

Thakur also announced reducing power tariff from 75 paise per unit to 50 paise for irrigation.  He said the state government has got approval for projects worth Rs 10,300 crore from the Centre for externally aided projects. Most of the projects are aimed at uplifting the rural economy by providing support to agriculture, irrigation, water supply and energy, he said.

Thakur announced 50 per cent subsidy for barbed wire and chain link under the Mukhya Mantri Khet Sanrakshan Yojna.  He said breeding farm for Sahiwal and Red Sindhi cows will be set up with a total cost of Rs 11.21 crore. Besides, Rs 11,000 per annum will be provided as 'Varshik Loktantra Prahari Samman' to people who had been arrested during Emergency under the Maintenance of Internal Security (MISA) Act.

The social security pension is proposed to be increased from Rs 750 to Rs 850 and from Rs 1,300 to Rs 1,500. More than 5 lakh persons will be benefited.  One additional LPG refill cylinder will be provided free of cost to the beneficiaries of Himachal Grihani Suvidha Yojna and Ujjwala Yojna. Two lakh families will benefit as a result in the next year.

The state government has decided that 10 per cent reservation will be provided to the economically weaker section (EWS) of the general category in employment and educational institutions, Thakur said.  Five drug de-addiction and rehabilitation centres will be set up to tackle the drug menace. 'Yuva Navjeevan Board' will be formed under the chief minister to tackle trafficking and consumption of narcotics and rehabilitate addicted persons, he added.

Announcing a new Sahara scheme, he said financial assistance of Rs 2,000 per month would be given to patients suffering from grievous and debilitating conditions as such as Parkinson's, cancer, paralysis, muscular dystrophy, haemophilia, thalassemia and renal failure.  Diet allowance of people infected with HIV-AIDS will be increased to Rs 1,500 per month.

Thakur also said a new tourism policy would be introduced and a Master Plan for promoting eco-tourism will be prepared. Helicopter taxi services will be launched to connect more towns. The chief minister said hydel projects with an installed capacity of 500 MW would be commissioned. These include the 111 MW Sawra-Kuddu and the 100 MW Uhl Hydel projects.