Aadhaar card linking deadline: The top court had on March 13 extended indefinitely the March 31 deadline for linking bank accounts and mobile phone numbers with Aadhaar card. However, it had allowed the government and its agencies to link the 12-digit national biometric identifier number of the beneficiaries for transfer of benefits of schemes funded from this fund 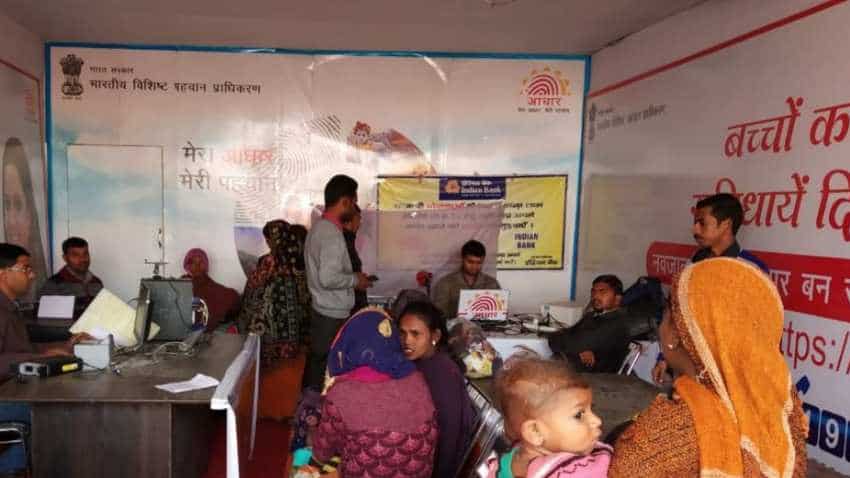 Ajay Bhushan Pandey said the success rate of biometric authentication and said "for government systems, the success rate is 88 per cent, for banks it is 95 per cent and for telecom, it is 97 per cent". Image source: AadhaarTwitter handle

Aadhaar card linking deadline: The Supreme Court today refused to pass an interim order extending the deadline of March 31 for linking of Aadhaar with the welfare schemes where benefits are transferred to citizens from the Consolidated Fund of India. The top court had on March 13 extended indefinitely the March 31 deadline for linking bank accounts and mobile phone numbers with Aadhaar card. However, it had allowed the government and its agencies to link the 12-digit national biometric identifier number of the beneficiaries for transfer of benefits of schemes funded from this fund.

A plea, seeking extension of time beyond March 31 for linking Aadhaar with welfare schemes, was made today before a five-judge constitution bench headed by Chief Justice Dipak Misra after Ajay Bhushan Pandey, CEO of Unique Identification Authority of India (UIDAI), concluded his PowerPoint presentation (PPT), claiming it would take "billions of years" to decrypt the saved data, including the biometrics. Senior advocate K V Viswanath, appearing for a petitioner opposed to the Aadhaar scheme, took a cue from the PPT in which the UIDAI CEO said that the success rate of Aadhaar authentication in government systems was 88 per cent.

"If the data of UIDAI says that there was only 88 per cent success rate of Aadhaar authentication, then it means that 12 per cent people are excluded from the benefits in schemes linked with Aadhaar. Twelve per cent failure is too high," the lawyer said, adding that almost 14 crore citizens cannot take benefits. An interim order is required to be passed to extend the March 31 deadline for welfare schemes also, Viswanath said during the day-long hearing before the bench, which also comprised Justices A K Sikri, A M Khanwilkar, D Y Chandrachud and Ashok Bhushan. Attorney General K K Venugopal vehemently opposed the submission saying "nobody has been excluded. Not a single case is there where denial of benefits (for want of Aadhaar) has taken place". The bench then said "We will not pass any interim order at this stage" and added that the petitioner may argue this aspect in their rejoinder submissions.

"67 crore SIM cards have been sold by telecom companies by using Aadhaar authentication," he said, adding that in business activities, the success rates were higher and "the reasons are obvious". Allaying the apprehensions regarding failures in authentication of elderly people, the UIDAI CEO said the success rate was 83 per cent and if iris is also matched, then it goes to 90 per cent. He said that from July, the authentication process will also include "face recognition technology" which would be more accurate and enhance the success rate.

At the outset, the CEO gave the details of enrolment operators who have been blacklisted and said that 10,268 such entities have been suspended for various reasons like corruption, use of unparliamentary language, lack of quality. "Have you suspended any operator who have parted with information," the bench asked.

The CEO said the enrolment process, which includes capturing of biometrics, is being conducted on the UIDAI's software and the moment the operator presses the 'save' button, the data gets encrypted. It would take "billions of years" to decrypt it, he said. UIDAI was also phasing out private enrolment agencies and the process was on to ensure that enrolment is carried out only at banks and post offices, he said, adding that the Aadhaar Act makes sharing of any data punishable as well. The bench asked the UIDAI to satisfy it as to whether any aggregation of data was possible or not.
The UIDAI head said there was not much details with it as Aadhaar required minimum information from citizens like photograph, demographics, finger prints and iris. It does not collect details of "religion, caste, tribe, language, records of entitlements, income or medical history and profession", he said.
The UIDAI is "blind" to the real purpose for which Aadhaar authentication has been done and there is no question of surveillance on citizens, he said.

After the UIDAI CEO concluded his presentation, senior advocates Shyam Divan and K V Viswanath gave a list of 20 questions to the bench which asked Pandey to submit a written response. The hearing on clutch of petitions challenging the constitutional validity of Aadhaar and its enabling 2016 law, would resume on April 3 when the Attorney General would restart advancing his submissions.

Voter ID-Aadhar linking: Government explains why it is needed