Aadhaar 2018 Updates: How the twists and turns in 12-digit unique ID unfolded

In a 4-1  judgement  delivered by the Constitution Bench, the Supreme Court held that Aadhaar would remain compulsory for the filing of Income Tax (IT) returns and allotment of Permanent Account Number (PAN) 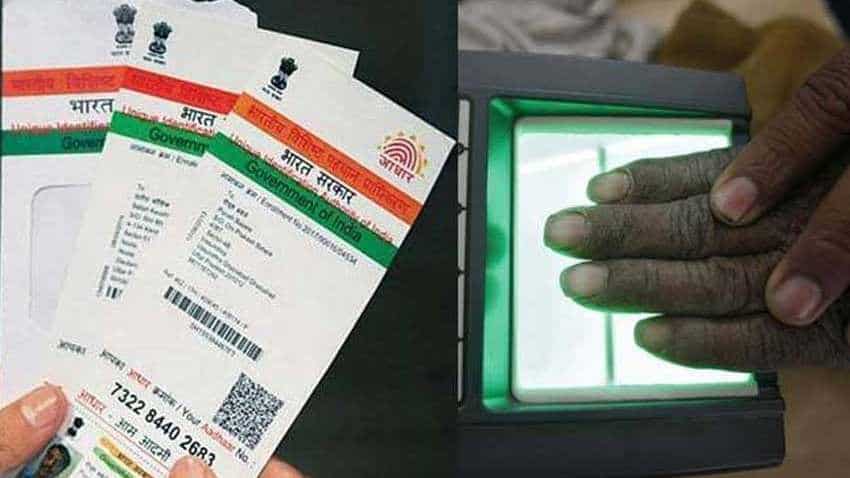 New Delhi: Aadhaar, India's extraordinary attempt to give every citizen a biometric identity, is set for a massive revamp with new offline verification tools and non-intrusive ways for people seeking to voluntarily use the 12-digit unique number for new bank accounts and mobile connections.

After twists and turns in 2018, led by the landmark Supreme Court ruling on the constitutional validity of Aadhaar, the UIDAI's efforts around offline modes like eAadhaar and QR code that can leverage the unique ID without any access to biometrics or even revealing the 12-digit number would gather pace in 2019.

From school admissions to getting marriage certificates to paying taxes to taking new mobile connections, Aadhaar touched multiple facets of people's lives as it became the default identifier. This was true for around 1.22 billion Aadhaar holders till doubts emerged that collection of biometric details, even for general service, could infringe on a citizen's privacy rights.

Then, the Supreme Court upheld the constitutional validity of the world's largest biometric identification database but spelt out its new limitations.

After last year's assertion that Indians have a right to privacy, the apex court in September 2018 redefined the boundaries of the biometric authentication, Aadhaar can be used for payment of government benefits and taxation records but private companies were barred from accessing it.

In a 4-1 judgement delivered by the Constitution Bench, the Supreme Court held that Aadhaar would remain compulsory for the filing of Income Tax (IT) returns and allotment of Permanent Account Number (PAN)

However, Section 57 of the Aadhaar (Targeted Delivery of Financial and other Subsidies, Benefits and Services) Act, 2016 that permitted private entities like telecom companies or other corporates to use the biometric data was struck down, dealing a body blow to the government's ambitions to make the world's largest biometric project mandatory for a slew of services.

The landmark ruling sent banks, telecom operators and fintech companies, who relied heavily on Aadhaar eKYC scrambling in search of other viable means of customer verification.

As the verdict meant that fulfilling regulatory Know Your Customer (KYC) requirements would have again involved a lot of paperwork for verification purposes, Aadhaar-issuing authority, Unique Identification Authority of India (UIDAI), quickly came up with alternate modes like QR (Quick Response) codes, e-Aadhaar and offline methods.

Just as 2018 started to wind down, came another twist in the plot. Earlier this month, the government decided to propose changes to existing laws - Telegraph Act and PMLA - in order to allow the use of Aadhaar as an ID verification tool for opening bank accounts and obtaining mobile connections, albeit on a voluntary basis. Additionally, fresh penal provisions have been proposed through an amendment in Aadhaar Act, to deter companies from insisting on Aadhaar or misusing the biometric data.

The proposed amendments, which will be placed before the Parliament during the ongoing Winter session, propose to arm UIDAI with regulator-like powers to take enforcement actions on the misuse of the national biometric ID and impose stiff penalties on violations.

The compelling reason behind this seems to be the government's belief in the transformative potential of Aadhaar, the system is so cheap and efficient that it is estimated to have accounted for over 90 per cent of new subscriptions in the telecom sector, according to experts.

More stringent deterrents are likely to be put in place in the coming months. These might include a penalty for failure to obtain consent for authentication or offline verification -- up to three-year imprisonment or fine of up to Rs 10,000, penalty for unauthorised use of core biometric information. The latter could attract imprisonment between 3-10 years and a fine of up to Rs 10,000.

Even as it dons regulatory role, the UIDAI would continue to accelerate efforts to transform and scale up Aadhaar enrolment and update services, currently available through 30,000 centres operating in designated bank branches, post offices and government premises across the country.

'Aadhaar Seva Kendras', similar to the concept of Passport Seva Kendras, will come up in 53 cities across India at an estimated project cost of Rs 300-400 crore. These swanky new centres will be operational by August next year, dishing out appointment-based enrolment, update and other miscellaneous services around Aadhaar, under the watchful eyes of authority's own employees.

Earlier this year, former UIDAI CEO Ajay Bhushan Pandey, recalling his early years as a small-town boy who didn't hold a photo identity for a long time, had reportedly said that Aadhaar offered an answer to an ancient question that was asked by sages, who am I?

The year that was, ensured that the answer continues to be the 12-digit identifier, at least for those who choose to use it.