18 of 28 Rakesh Jhunjhunwala portfolio stocks tank in 2018, but the Big Bull sails through and how!

Rakesh Jhunjhunwala portfolio: Data showed that 10 stocks that account for 73 per cent of his stock holding have delivered healthy returns of up to 56 per cent so far in 2018, which offset the losses seen on 18 other counters. 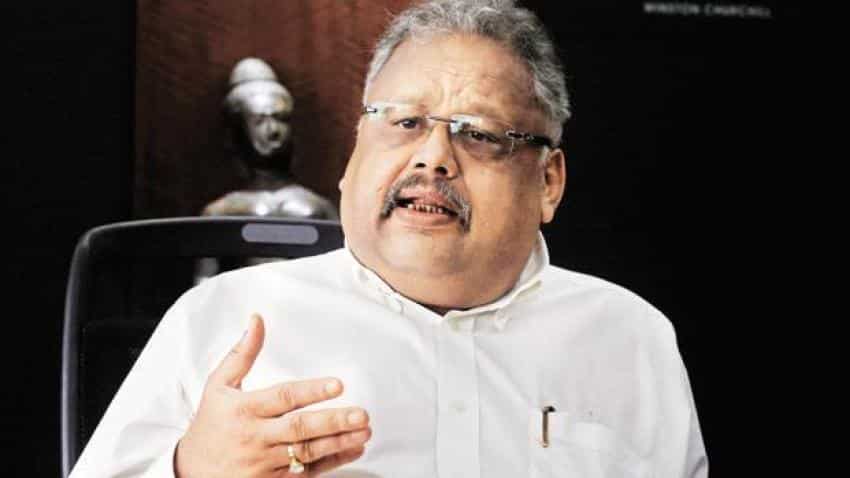 Rakesh Jhunjhunwala made only minor changes in his portfolio in the March quarter. Image source: Reuters

Ace investors such as Rakesh Jhunjhunwala do not bother about short-term market fluctuations. They hold stocks for years. This was evident in the March quarter, where the Big Bull held on to his favourite stocks. And guess what, even as 18 of 28 of his known portfolio stocks  delivered negative returns this calendar, his portfolio value is on the rise. While Jhunjhunwala tinkered with his portfolio a little - buying further into Titan Company, Federal Bank and Agro Tech Foods and selling shares of Prozone Intu Properties during the March quarter - a few well-performing stocks helped the ace investor's portfolio to swell even more.

Data showed that 10 stocks that account for 73 per cent of his stock holding have delivered healthy returns of up to 56 per cent so far in 2018, which offset the losses seen on 18 other counters.

As of Monday's close, Rakesh Jhunjhunwala's portfolio is valued at Rs 14,664.84 crore. This includes only those stocks where he held over 1 per cent stake as of March 31, 2018.

One stock that contributed most to his portfolio was Titan Company, which accounts for half of its known investments at Rs 7,368 crore. Jhunjhunwala along with his better half Rekha Jhunjhunwala bought 1,07,000 additional shares in Titan in the March quarter to raise their holding in the jewellery firm to 7.51 crore shares, or 8.46 per cent stake. It was 7.50 crore shares, or 8.45 per cent stake, at the end of December quarter. The stock gained 14 per cent so far this year.

Escorts is the distant second where Rakesh Jhunjhunwala kept over Rs 1,000 crore of his portfolio money. NCC, Crisil and Lupin accounted for Rs 700 crore each in his portfolio. 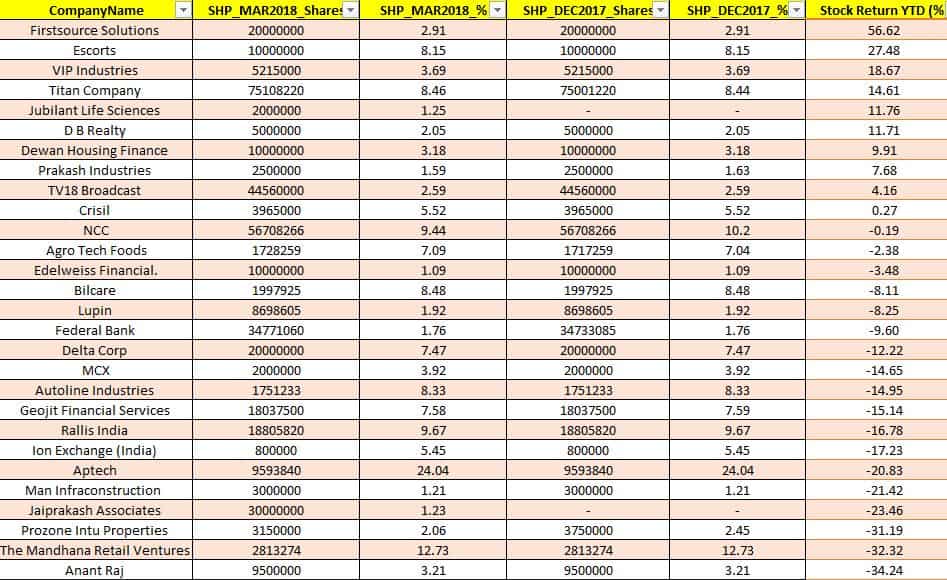 Rakesh Jhunjhunwala made only minor changes in his portfolio in the March quarter.

Jhunjhunwala increased stake in Jubilant Life Sciences and debt-laden Jaiprakash Associates, whereas his stake remained below 1 per cent in the December quarter. He sold stake in Orient Cement and it could not be ascertained if he has fully exited the counter. He held 2,500,000 shares, or 1.22 per cent stake in the company at the end of December 2017.

The Warren Buffett of India, as Jhunjhunwala is popularly known, did not sell any shares in Prakash Industries, and NCC, but his stakes slipped to 1.59 per cent and 9.44 per cent in Q4 from 1.63 per cent and 10.2 per cent, respectively in Q3.

A self-made billionaire investor, Rakesh Jhunjhunwala is known for his value investing and long-term approach to the stock market. His fame is such that investors often lap up the companies whose shares he picks. Son of an income tax officer, Jhunjhunwala started tracking stocks while he was just 12-13 years old.