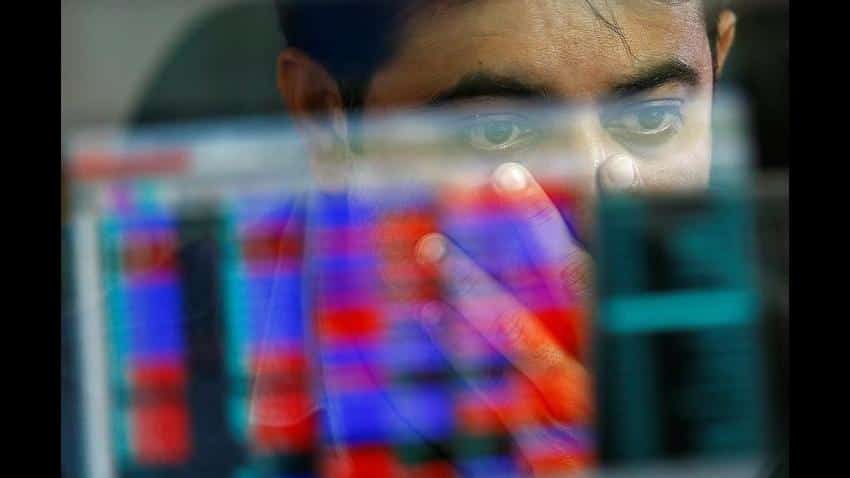 Sensex today: The benchmark indices hit three-month low, extending losses for the sixth straight session on Wednesday as negative trend in Asian markets along with pressure in banking stocks weighed on the indices. The Sensex settled at 33,033, down 284.11 points, while the broader Nifty50 ended at 10,154, down 95 points. In the broader market, the BSE Smallcap index underperformed to lose 2.2 per cent, while the BSE Midcap index dipped over 1 per cent. Market breadth, indicating the overall health of the market, remained negative. On the BSE, 2,237 stocks declined, 503 stocks rallied, while 125 stocks remained unchanged.

Global equities fell after White House economic adviser Gary Cohn, seen as a bulwark against protectionist forces within the US President Donald Trump’s administration, announced his departure, and Trump said he would push ahead with his plan to impose heavy tariffs on steel and aluminium imports, possibly triggering a trade war. On Wall Street, US stock futures fell more than 1 per cent.

The bears continued to dominate, as the equity benchmark indices extended losses for sixth straight session, following negative Asian and European cues and weak domestic sentiments. Nifty remained under pressure throughout the session and ended sharply lower by 0.9% at 10,154 levels. The broader market indices ‘BSE-Midcap and Smallcap’ underperformed the benchmark, reporting losses of 1.3% and 2.2% respectively. Among the sectorial indices, FMCG & consumer durables ended in the green while Banks, Oil & Gas, Capital Goods and Power were the top losers, down by 1-2%.

We remain cautious on markets in the near term. Volatility is likely to remain high due to weak global sentiments, continued selling pressure from FIIs, rising bond yields in US and continued underperformance from PSU banks. Domestic macro data like IIP, WPI & CPI inflation, which are scheduled next week, will be closely tracked by the market participants. Traders should avoid taking overleveraged position due to extreme volatility.

All but Nifty FMCG sector settled in red. 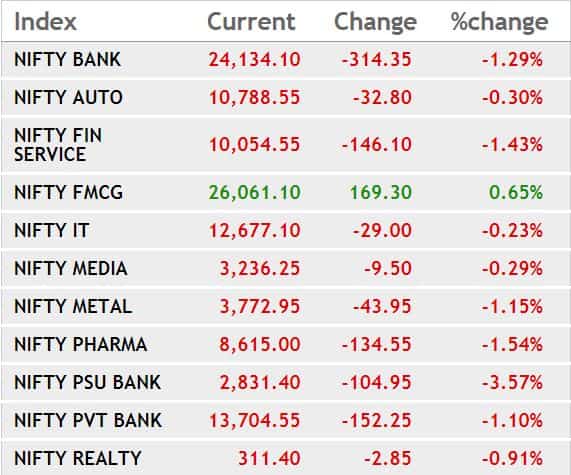 Adani ports (down 6 per cent), State Bank of India (down 3.8 per cent) and ICICI Bank (down 2.8 per cent) were the top losers, while ITC, Maruti Suzuki and Bajaj Auto gained the most, advancing up to 1 per cent.

Jindal Stainless (Hisar) fell 4.77 per cent and Hindalco Industries dropped 3 per cent, with the stocks on course to extend their losses into a third straight session after Donald Trump said he would push ahead with his plan to impose heavy tariffs on steel and aluminium imports.

Famed investor Warren Buffett feels strongly about not investing in stock market on borrowed money. The Oracle of Omaha, as he is popularly known, suggested the same in his latest annual letter too. On the other hand, Rakesh Jhunjhunwala, often called Warren Buffett of Indian stock market, recently remarked he would not be where he is had it not been for leverage. Buffett, the chairman and CEO of Berkshire Hathaway believes price randomness in the short-term can obscure long-term growth in value, and can also unsettle investors' mind, the precise reason why one should avoid going into debt to buy stocks.

The biggest NPA trapeze artiste in PSUs is Gautam Adani. It is time he is made accountable or a PIL is inevitable

ICICI Bank (down 3 per cent), Adani Ports (down 2 per cent) and State Bank of India (down 1.5 per cent) were the top losers, while Wipro, Infosys and TCS gained the most, advancing up to 1 per cent.

All but Nifty IT index (up 1 per cent) was trading in red. 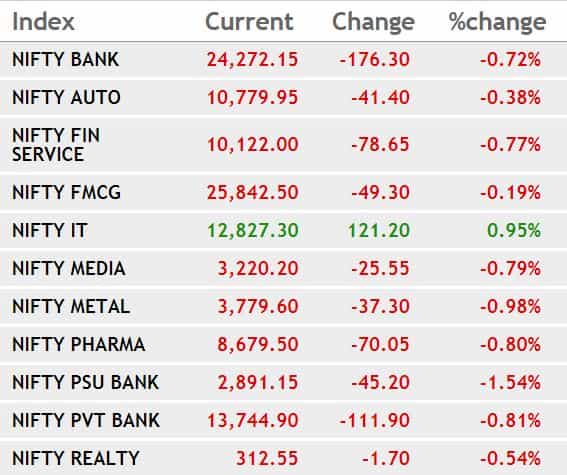 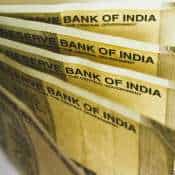 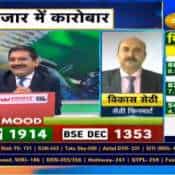 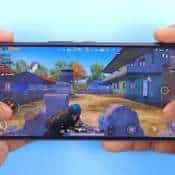 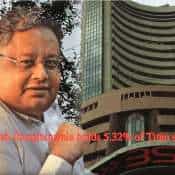 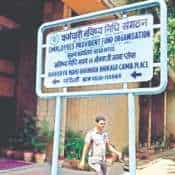 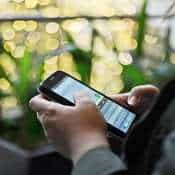