Mrutyunjay Mahapatra, MD & CEO, Syndicate Bank says that they are going through stabilization phase of profitability at present after returning to profits in Q3 and Q4 of the last fiscal. 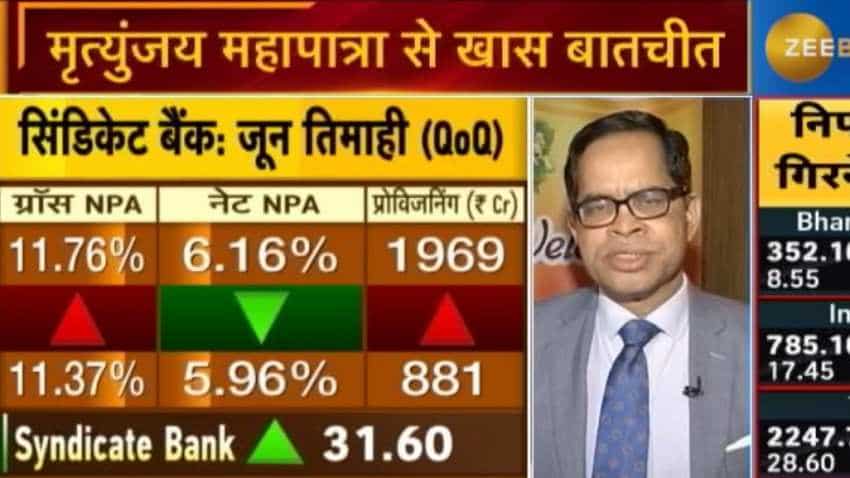 Mrutyunjay Mahapatra said a couple of stresses from unknown quarters were seen in the first quarter, which made us go for aggressive provisioning to stay out of any PCA trigger.
Written By: Jitesh Kumar Jha
RELATED NEWS

We are going through stabilization phase of profitability at present after returning to profits in Q3 and Q4 of the last fiscal, says Mrutyunjay Mahapatra, MD & CEO, Syndicate Bank. In an interview with Mansee Dave, Zee Business, Mahapatra said a couple of stresses from unknown quarters were seen in the first quarter, which made us go for aggressive provisioning to stay out of any PCA trigger. Edited Excerpts:

Your losses have decreased in the first quarter and has reached to Rs940 crores. Provide a timeline by when Syndicate Bank will return in the profit?
We have already returned in profit in Q3 and Q4 of the last financial year (FY2018-19), however, have I told my friends in media that we were going through a stabilization phase of profitability. And, during the first quarter of the current financial year, we witnessed that there were a couple of stresses, which has come from unknown quarters and IBC resolutions didn’t play out as planned. So, we took aggressive provisioning in the first quarter, essentially to stay out of any PCA trigger. I think that we are on a constantly on a profitable kind of operation and we will get to profitability in the next one or two quarters.

There is a decline in Syndicate Bank’s NPAs, but it remains above 11% yet. Tell us the kind of recovery in terms of NPA is expected in FY20?
Recoveries are in two buckets. The first bucket is related to IBC resolutions, which we are pegging at between Rs2,000-2,500 crores if all the resolutions take place. The normal run rate for our recoveries through other channels like SARFAESI (Securitisation and Reconstruction of Financial Assets and Enforcement of Securities Interest) and upgradation among others are targeted at Rs4,000 crore for the whole year. So, total net-net, we are expecting to recover between Rs6,000-7,000 crore during the current year.

You have exposure in HDIL, which has been taken to IBC. Have you provisioned anything regarding this account?
HDIL has gone into the second year of NPA status, so we have provided whatever is required as per the Internal Revenue Code (IRC) requirements. The hair cut right now is difficult to estimate because it depends on the resolution professional. Based on the process that has been prescribed as per the law, we will consider all the assets that they have and then we will determine what is an optimal haircut that needs to be taken.

Did your business reaped any benefits, especially in the home loan segment amid ongoing liquidity concerns in the NBFC sector?
As you know that we finance NBFCs and we are one of the leading financiers of NBFCs in the current Indian financial market and yes, we have gained a lot of pools because of NBFC liquidity issue, which I believe is a perception more than a reality as bankers are willing to lend to good NBFCs. However, these home loan relaxation that has been given currently by RBI that home loans given to NBFC in the affordable housing segment will be treated as priority sector lending. This is also like to boost our credit inflow in NBFCs and increase our market share.

After four consecutive rate cuts, do you expect any further rate cut from the RBI?
While announcing the last RBI policy, Governor Shaktikanta Das, said “Calibrated Tightening to Neutral to Accommodative”, which means RBI has relaxed its monetary policy by taking into account the growing concern that is prevalent in the economy. And, whenever the monetary policy stand turns accommodative from the neutral then a rate cut of 25 basis points (bps) is expected in the market. So, I think there a rate cut of 25-50bps is likely to happen in the next one-two quarters.

Do you think that the Reserve Bank of India or the government may come up with some relief or stimulus package for the industry amid the ongoing slowdown in the economy?
Whether it is RBI or Government, they both expect that the economy continues to grow, inflation remains low and there is economic stability. Economic stability in the economic system means stability in debt, investment system, stock market and banking segment among others. So, we will have to look on the stability of these four systems namely stock market stability, banking system stability, economic stability and RBI or Guilt market stability and think about the slowdown that is being talked about and identify the important segment and bring special schemes like interest rate reduction, providing additional liquidity, forbearance that has interest holiday for them, to take things forward.

Do you expect any help from the government for growth, if yes, then let us know the expected amount of capital?
Honourable Finance Minister has announced a growth capital of Rs70,000 crore for public sector banks. Everyone from the banking segment feels that we have enough regulatory capital. The growth capital has been announced for the banking system to support the growth in the rural sector and infrastructure as well as investment growth. But this additional capitalization of the public sector banks is yet to be discussed and it will let us know the amount each bank will get including Syndicate Bank.