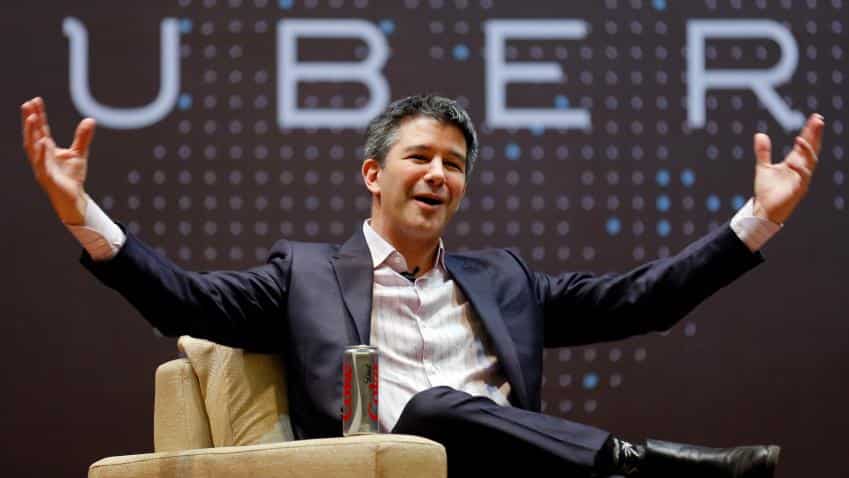 Uber responded that it did not need the permit, because its cars require a person to constantly monitor and take control of the wheel, which does not meet the definition of autonomous. Photo of Uber CEO Travis Kalanick. Image Source: Reuters
Written By: Reuters
RELATED NEWS

Odd-Even to get tough for Delhiites! Ola, Uber drivers to go on strike on November 11

Uber Technologies Inc (UBER.UL) rolled out its self-driving car fleet in its hometown of San Francisco on Wednesday, but faced a backlash from state regulators who say the company needs a permit to keep the vehicles on the road.

The California Department of Motor Vehicles sent a letter to Uber on Wednesday ordering the company to "cease the operations" of its autonomous cars until it applies for and receives the testing permit required by the state.

Uber responded that it did not need the permit, because its cars require a person to constantly monitor and take control of the wheel, which does not meet the definition of autonomous.

"For us, it`s still early days and our cars are not yet ready to drive without a person monitoring them," Uber said in a company blog post.

It was the latest in a long line of spats between Uber and regulators, and followed a fairly seamless rollout three months ago in Pittsburgh, where Uber unveiled its secretive work on autonomous cars for the first time to the public. The company started with just four self-driving cars available to Pittsburgh passengers, although it had a fleet of more than a dozen for testing.

The San Francisco program will mimic the Pittsburgh pilot. Riders who request an UberX, one of the company`s budget ride options, may be matched with a self-driving Uber.

While 20 other companies exploring self-driving cars, including Alphabet`s Google , Tesla Motors and Ford Motor Co , have obtained a DMV permit, Uber has not. Uber`s self-driving cars have been seen around San Francisco since at least September.

In its letter to Uber, the DMV`s chief counsel said it "will initial legal action" if "Uber does not confirm immediately that it will stop its launch and seek a testing permit."

California defines autonomous vehicles as cars that have the "capability" to drive "without the active physical control or monitoring of a natural person." Uber argues that definition does not apply to its cars, which are equipped with a driver and an engineer in the front seats to take over in situations such as a construction zone, pedestrian crossing or taking a left turn across a lane of traffic.

"All of our vehicles are compliant with applicable federal and state laws," a spokeswoman said.

In a company blog post, Uber called on California to take a more "pro-technology" approach to regulating autonomous cars.

"Several cities and states have recognised that complex rules and requirements could have the unintended consequence of slowing innovation," Uber said. "Our hope is that California, our home state and a leader in much of the world`s dynamism, will take a similar view."

On Wednesday, local media aired a video of a self-driving Uber running a red light, which was captured by a bystander. Uber said the incident was because of human error - suggesting that the car was not in autonomous mode - and was not carrying passengers, and the driver had been suspended.

Odd-Even to get tough for Delhiites! Ola, Uber drivers to go on strike on November 11