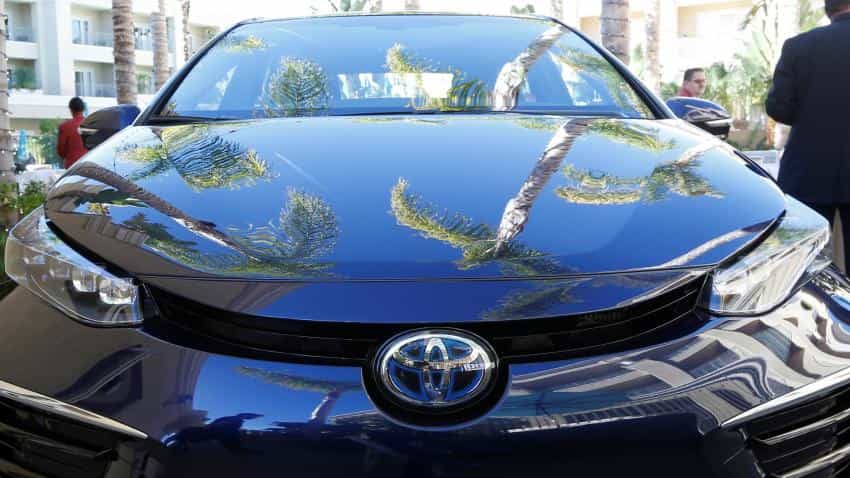 Although overall sales of the company last year were on positive side, but it got affected due to the government's demonetisation drive. Image Source: Reuters
Written By: PTI
RELATED NEWS

Japanese carmaker Toyota is expecting its vehicle sales in India to remain flat during the current year mainly on account of uncertainty in the market post demonetisation.

The company, which is present in India through a joint venture with the Kirloskar Group, sold 1,34,149 units of its entire range of vehicles in the country in 2016, registering a decline of 4 per cent over the previous year.

"For 2017, our target is to sell similar volumes like 2016 or may be more than 2016 ... We are being conservative in our target setting for 2017. We will alter the same considering the demand situation and market pull," Toyota Kirloskar Motor Director and Senior Vice President (Marketing and Sales) N Raja told PTI here.

Although overall sales of the company last year were on positive side, but it got affected due to the government's demonetisation drive, he added.

"Our sales in the last two months of 2016 were affected due to demonetisation and we believe that its impact is going to last in the first quarter of the new calendar year," Raja said.

December is usually a high selling month as most makers try and liquidate the year-end stock by offering schemes of huge discounts on products, he added.

"Having said that, the number of walk-ins at the dealership and enquiries have been impacted due to demonetisation in the past two months," Raja said. Talking about fall in sales in last year, he stated that 2016 has also been a year of challenges. "Our sale of Innova and Fortuner got affected due to the ban on registration of vehicles over 2,000 cc in Delhi and NCR, where both the Innova and Fortuner are present," Raja said.

Talking about sales in North East, the senior official said the region contributes 18 per cent of Toyota vehicle sales in the east, therefore making it a significant market.

"North East is a significantly important market for the auto industry as it contributes to 20 per cent of the total passenger car sales in Eastern India. Assam being the largest state in NE, contributes the highest to sales in this region," he added.

Raja said Assam contributes more than 85 per cent of Toyota sales in North East and it sold about 1,100 cars in 2016 in the state.

When asked about sales expectation from the region in 2017, he said: "With the launch of New Innova Crysta and Fortuner and also having refreshed models of Etios series, we expect to grow our sales volumes. However government policies and economic factors will play a vital role in driving the automobile industry."