We gained around Rs 248 crore on the exchange rate fluctuation in the quarter but there was a loss of Rs 579 crores on yearly basis, says MK Surana, Chairman and Managing Director, Hindustan Petroleum Corporation Limited (HPCL), during an interview with Zee Business. 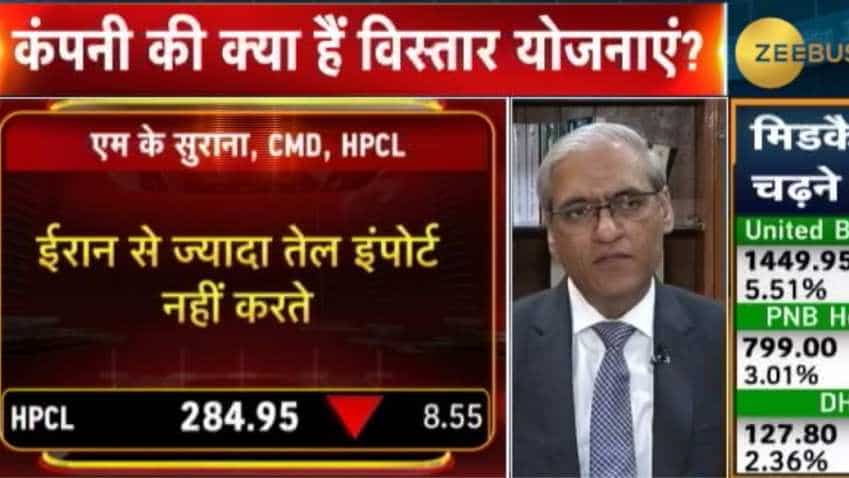 Surana said sanctions on Iran will not have a major impact on our crude supplies. Image source: Zee Business

We gained around Rs248 crore on the exchange rate fluctuation in the quarter but there was a loss of Rs 579 crores on yearly basis, says MK Surana, Chairman and Managing Director, Hindustan Petroleum Corporation Limited (HPCL). During an interview with Swati Khandelwal, Zee Business, Surana said sanctions on Iran will not have a major impact on our crude supplies. Excerpts:

Q: HPCL’s PAT saw a jump of over 70 per cent on a QoQ basis and there was a rise in margins too. What led to this kind of performance?
A: Better throughputs, marketing volumes, operational efficiency and inventory helped us in getting better margins. In addition, the exchange rate fluctuations remained positive in this quarter.

Q: Rupee has appreciated a lot in this quarter. Did it had any impact on the Forex front?
A: In this quarter, we gained around Rs248 crore on the exchange rate fluctuation but there was a loss of Rs579 crores on a yearly basis.

Q: Sanction on Iran and unrest in the Middle East is supporting the crude prices. Did the sanctions had an impact on Iranian supplies? Also, update us on new year’s sourcing contracts with Iran?
A: Iranian oil doesn’t have much space in HPCL’s total sourcing strategy and that’s why it will not have any substantial impact on us. Interestingly, its alternate crude is available with us.

Q: Update us on HPCL-MRPL merger and there are reports that the deal is facing certain roadblocks as ONGC is not in favour of share swap deal?
A: What is the source of his information? Secondly, I can’t comment on newspaper reports, but I don’t think that there is any specific input from HPCL or ONGC’s side.

Q: Companies like Maruti and Tata are phasing out small diesel engines. Will this have an impact on your business? At the same time, also update us about your BSVI upgradation?
A: BSVI will replace BSIV and in the process, the vehicles will be using a new variety of fuel in the coming days. Thus, the auto industry will also have to upgrade themselves and come up with BSVI compliant vehicles, so that they can reap the benefits of the new fuel. However, the existing vehicles will also run on the BSVI fuel but will not be benefitted as they are not complaint to the new fuel. So, the needed conversions should be done. As far as refineries are concerned, Projects related to upgrading the facilities to make the two refineries compliant to BSVI norms are underway at present. It also involves our expansion projects. And, they are in an advanced stage and BSVI fuel will be rolled out on April 1, 2020.

Q: Elections are over, and results are around the corner. Do you think that the OMCs will raise the fuel prices in the coming days?
A: It would be wrong to speculate it because the prices of diesel and petrol are based on international prices and it has an exchange rate and international prices of the product. There is an assessment to track the movement of the prices and they are decided on its basis. And, there is a stop and stop not to control the daily price. Actually, there is a crude, which is processed and has to go through a process. So, it is not so that there is a direct correlation to that but there is a methodology to decide.

Q: Let’s talk hypothetically, what will happen with the economies, financials and strategy if crude prices cross $100/barrel levels obviously the under-recoveries will come into the picture?
A: It will be decided when the crude at priced at $100/barrel as there is no one today, who talks that crude will reach such levels. I don’t think so.