The Baba Ramdev-led company posted a 150% growth in revenues to reach Rs 5,000 crore, but looks to double this in the current fiscal 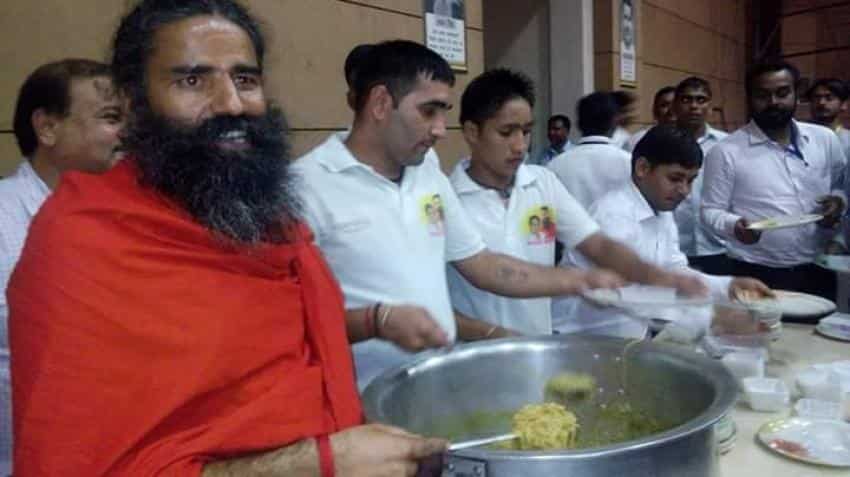 Yoga-guru Baba Ramdev and the managing director of Patanjali Ayurved, Acharya Balkrishna held a press conference in New Delhi on Tuesday to announce that Patanjali Ayurved will strive to achieve a Rs 10,000-crore revenue target in the current year from Rs 5000-crore in the fiscal year just gone by.

Baba Ramdev said that the company will achieve 150% growth this year. Setting aside the faux pass of faulty maths at play, Ramdev's Patanjali has already given sleepless nights to many companies in India.

Patanjali noodles are touted to be a tough competition to Nestle's Maggi noodles, which is fast gaining back its lost market share since its reintroduction in the Indian market after it was absent for a large part of last year.

Other fast moving consumer goods (FMCG) companies like Hindustan Unilever (HUL) and Colgate-Palmolive, too, are devising strategies to tackle the competition from Patanjali Ayurved. Ramdev, on Tuesday, said, "This is just the beginning. Nestle, HUL, Colgate-Palmolive will be left clueless eventually.”

This means that Patanjali Ayurved is already earning more revenue than Colgate-Palmolive and is aiming to reach Nestle's FY15 revenue by the end of this year.

The biggest challenge for Patanjali remains HUL which earned a consolidated revenue of nearly Rs 32,000 crore in financial year 2015. India Infoline, a brokerage and stock market research firm based in Mumbai said that by 2020, Patanjali Ayurved is expected to grow to Rs 20,000-crore revenue. Given the aggressive plans, it is entirely possible that Patanjali reaches this mark well in time.

Reports say that Patanjali has grown ten times over the past five years already. According to a Business Standard report, the company had revenue of Rs 453 crore in FY12. Its revenue doubled to Rs 850 crore the following year and reached Rs 1,191 crore in FY14. In 2014-15 it doubled to Rs 2,006 crore and posted a net profit of Rs 317 crore.

Clearly, Ramdev-led Patanjali has more than doubled every year over the past five years with products like Dant Kanti toothpaste earning sales of Rs 450 crore in FY16 and Kesh Kanti shampoo and hair oil posting Rs 350 crore in sales in less than a year, as claimed by Ramdev.

So how is Baba Ramdev looking to double his business empire within a year from here? Exports and e-commerce.

Balkrishna, MD and Co-founder of Patanjali says that the company is enhancing its e-commerce strategy and at the same time strenthening exports to at least 10-12 countries. The company's products are already available on most online grocery stores. Apart from this, the company is looking to expand its online presence significantly.

This isn't all. Patanjali has also begun investing Rs 1000 crore in setting up four more manufacturing plants including a Rs 150 crore research and development (R&D) facility.

The company already has 4,000 distributors, 10,000 stores and 100 mega-marts and it plans to expand on these as well. Big retailers like Kishore Biyani's Future Group and Mukesh Ambnai-led Reliance Retail, too, stock Patanjali products.

With 30 products under its brand and adding more in the current year, an advertising spend of Rs 300 crore, as per an Economic Times report, Patanjali Ayurved is gearing up for the FMCG battle quite well.

Whether Patanjali achieves this revenue target of Rs 10,000 crore only time will tell, however they do seem to be on the path to achieving it.