Tata and Thyssenkrupp shares have firmed on hopes a merger would trigger European steel capacity cuts. Tata Steel UK, Britain`s top steelmaker, is seeking regulatory approval to spin off its 15 billion pound scheme into a standalone entity because Thyssenkrupp will not take on its pension liabilities in a tie-up. 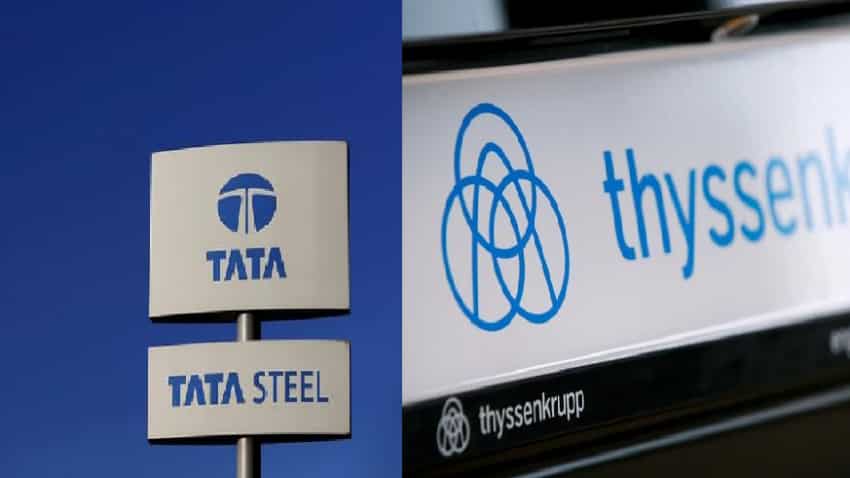 Investors expecting a deal this year in Tata Steel`s talks to merge its European assets with Germany`s Thyssenkrupp risk disappointment, given complications associated with the Indian-owned firm`s British pension scheme.

Tata and Thyssenkrupp shares have firmed on hopes a merger would trigger European steel capacity cuts. Tata Steel UK, Britain`s top steelmaker, is seeking regulatory approval to spin off its 15 billion pound scheme into a standalone entity because Thyssenkrupp will not take on its pension liabilities in a tie-up.

Tata says its UK unit, expected this year to post its first profit in five years, will fail if it has to keep ploughing funds into a scheme with 13 times more pensioners than paying employees. The regulator, however, has yet to be convinced about `imminent insolvency` - a precondition for spinning off a scheme - when Tata`s UK unit is turning a profit.

"There are still significant issues to be resolved," said a spokesman for The Pensions Regulator.

Experts and sources cite the difficulty of separating the pension fund into a rare standalone structure and of calculating how much money could be recovered from Tata to bolster it.

"It wouldn`t surprise me if these negotiations take another year," said Clive Fortes, partner at consultancy Hymans Robertson. Six equity analysts surveyed by Reuters expect a merger this year, with four of them expecting a deal by the summer. Three doubted the merger talks, announced last July, would succeed.

Thyssenkrupp`s finance chief said on Thursday "one must give Tata time" to find a solution for the fund. The company declined to say how long it would wait. Tata Steel declined to comment on a timeline for talks, but said this week it is hoping to "develop a solution for the UK pensions in the coming months".

Its 11,000 UK employees have been balloted on closing their BSPS scheme to future accrual, with results due this month. But that is only the first step towards separation of a scheme that has 130,000 members.

The BSPS` deficit is likely to balloon to 1 billion-2 billion pounds at end-March due to of lack of support from Tata`s Indian parent, the trustees said last month, adding the UK unit risks insolvency as a result.

However, the British business is targeting a profit of around 200 million pounds ($250 million) this year, sources say, helped by job cuts, surging steel prices and a slump in the pound that has made its exports more competitive.

"It seems there are now doubts as to whether the business really is insolvent, which makes the pension situation more difficult," said Ros Altmann, independent pensions expert and former UK pensions minister. The size of a BSPS claim against Tata`s Dutch steelworks is also unclear, with one media report putting the guarantee at 30 percent of the value of the Dutch business.

The trustees are seeking hundreds of millions of pounds from Tata to sever the guarantee and aid the scheme`s spin-off. "There`ll be an army of actuaries and lawyers combing through the accounts, arguing over the wording of the

An industry source said that guarantee is worth at least 500 million pounds. Tata might be liable for more than a billion to cover a full spin-off, said Martin Hunter, principal at consultants Punter Southall. Then

Tata is seeking rare regulatory approval to cut scheme benefits, spin the scheme off into a standalone entity not backed by a solvent employer, and continue trading.

"There is no legislative mechanism for this and the chances of it happening are very low," said independent pensions consultant John Ralfe.

Buy, Sell or Hold: What should investors do with Tata Steel, HCL Technologies and Jindal Stainless?