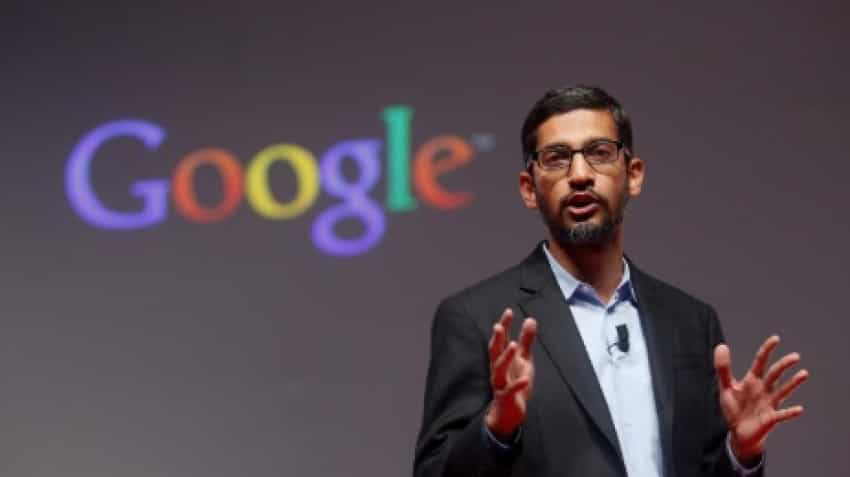 Observing that Google has been in India now for "a very very long time", Pichai said that the number of Indian manufacturers who would make devices 'Made in India'. Reuters
Written By: PTI
RELATED NEWS

Google's Indian-American CEO Sundar Pichai has said that The scale of India's market has allowed Google to develop new products in the country and take it to the global level, the internet giant's Indian-American CEO Sundar Pichai has said. Addressing the India Ideas Summit of US India Business Council (USIBC), Pichai also said that India and the US can lead on standardisation of privacy frameworks for better safeguards against privacy to ensure free flow of digital trade.

Observing that Google has been in India now for "a very very long time", Pichai said that the number of Indian manufacturers who would make devices 'Made in India'.

The Indian government, he said, has done a great job of making technology, one of the pillars by which, they will improve governance and as well as socioeconomic conditions there. "So we've been proud to be part of it," 46-year-old Pichai said at the summit after he received the Global Leadership Awards. Nasdaq president and CEO Adena Friedman was also honourd with an award. "And we deeply care about making phones cheaper every year so that more people can afford it and access it. In 2004, there were maybe two local Indian manufacturers who would make devices made in India. Now that number is up to well over 200 or so," he said.

"Our products have played a foundational role. But increasingly it's also happening in reverse. The scale of the Indian market, allows us to now develop maybe products there and actually take it out globally as well. So it's been an interesting trend for the last three to four years or so," Pichai said.

"Our payments product? India was moving towards digital payments, so we thought it was the best market to push the future of payments. We tried it there and it's worked very well. And now that team is taking that payments product and bringing it out of India to the global market," he said.

"So increasingly we see India not just as, as an opportunity, but you know, building in India and serving the rest of the world as well. And so it's exciting time," he said. Seeking better safeguards against privacy to ensure free flow of digital trade, Pichai said that India and the US can lead on standardisation of privacy frameworks. If standardisation was done across the world, it could significantly enhance digital trade, he said. "The free flow of information is essential to digital trade and we all can see the benefits of it. But to ensure that we can actually do it we need better safeguards around user privacy," Pichai said in response to a question.

Noting that rightfully so, users are increasingly concerned about it, he said that it is an important moment to create standardised frameworks both for users to have choice, control and transparency and for companies to be accountable as well with a clear set of a clear set of rules. "I think it's an area where, both in US and India we have reasonably aligned notions around a free and open internet; both countries have safeguarded principles of free expression. And so there's enough shared values here, I think, we can lead in privacy frameworks," he said.

"And to the extent you can standardise this globally will be a huge factor which drives digital trade. And so hence this is very, very critical to it," Pichai said responding to a question from Nisha Desai Biswal, president of the USIBC. Last month, Pichai had a written an op-ed in The New York Times, in which he stated that privacy should not be a luxury.

"Now, as you know, in India and in the United States, there are efforts at trying to draft new privacy legislation. Share some of your thoughts with us on how the US-India and other global systems can try to create an appropriate balance. And are there ways that we can have a consensus and a convergent way of approaching this?" Biswal asked.