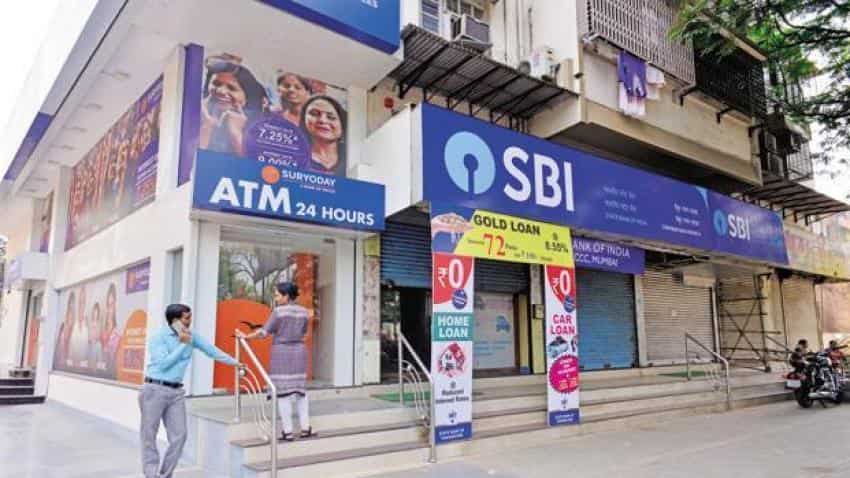 When we talk about State Bank of India (SBI), we believe nothing can go wrong with this lender, even though currently the entire banking system is choking with heavy stressed assets. The rise in NPA has been going on for years and the government along with the Reserve Bank of India (RBI) has not left a single stone unturned  to tackle this issue as they continue to hamper earnings and credit growth of lenders. SBI is the current king in stressed assets compared to other banks, and things turned even bleaker when the bank merged five of it’s associate banks under its umbrella, as this led to a rise in NPA. However, SBI has buckled up and with the latest news being circulated, the bank is expected to recover about Rs 40,000 crore of this money. Well this can be said as baby steps for SBI, considering the huge chunk of stressed assets it has.

SBI’s Deputy Managing Director (Stressed Assets Resolution Group) Pallav Mohapatra in a Financial Express report said, “Our expectation is that we will be making a recovery of more than Rs 40,000 crore in the current financial year. We expect to get around Rs 25,000-30,000 crore from IBC (Insolvency and Bankruptcy Code) route and the balance would be recovered from other sources like sale to ARCs and one time settlement.”

The Deputy Managing Director highlighted some SBI data and it’s exposure to stressed assets. Under RBI’s first list of wilful defaults which included somewhat 12 companies, SBI had a massive Rs 48,000 crore exposure, whereas in the second list it has Rs 28,000 crore - which takes the total to Rs 76,000 crore worth cases before NCLT for bankruptcy.

Recently, Bhushan Steel, which was the highest defaulter in first list had undergone insolvency proceedings and was merged with Tata Steel. SBI got claim of around Rs 11,500 crore from Bhushan’s deal.

Apart from this, SBI has filed around 250 cases in National Company Law Tribunals (NCLT) which has exposure of a whopping Rs 95,000 crore.

So for now SBI is confident about recovering about Rs 40,000 crore, but it needs to be noted that the bank is still very far away in sorting out the NPA issue.

After when SBI announced it’s Q4FY18 financial performance, Care Ratings agency released a study report of 26 banks including both private and public banks (also having SBI) performance for the last quarter of FY18.

SBI’s gross NPA exposure is highest in mid and large corporates with Rs 80,601 crore and Rs 82,004 crore respectively in Q4FY18. This was followed by SME at third sport having exposure of Rs 25,719 crore and agriculture sector with Rs 21,169 crore in total NPAs. 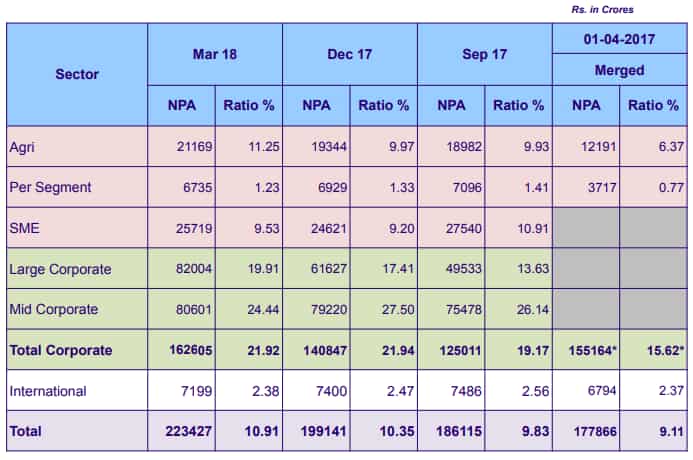 Still SBI is seen as the strongest lender, which is why analysts are upbeat on this bank going ahead.

Darpin Shah, Pranav Gupta and Kaushik Utpat analysts at HDFC Securities said, “Despite the PBT loss, asset quality deterioration is actually better than feared. With a breakthrough in one NCLT case and a few more nearing finalization, SBIN can be one of the biggest beneficiaries.”

The trio added, “With stress from restructured pool completely recognized and increased visibility on NCLT resolutions, we expect asset quality to improve hereon. However, we factor higher slippages/LLP of 2.9/1.9% over FY19-20E. Resolutions in NCLT cases (Rs 776bn i.e. ~35% of GNPA) will further provide cushion to our earnings.”

Motilal Oswal said, “With significant cleansing of the book largely behind, we expect provisioning expenses to decline sharply, while gradual pick-up in loan growth/margins is expected to further boost earnings.”

Nirmal Bang added, “We have revised our estimates for FY19/FY20 and retained Buy rating on SBI, revising our target price to Rs331 (from Rs364 earlier) and valuing the stock at 1.6x FY20E P/ABV and Rs65 for subsidiaries.”